Bernie Williams, a member of the 2001 Yankees team, had this to say about his memories from September 11, 2001:

It’s hard to believe that it has been ten years since September 11, 2001. Like everyone, I remember exactly the events of that day as if it was yesterday. We were on a homestand, so I was at my home. We were going to play the Red Sox that night. I recall waking up that morning, stirring around, and turned on the TV, and when I saw the images on the screen, I guess I was still half asleep because I thought for a second it was a movie…and then I saw the LIVE in the corner of the screen and knew this was real..this was happening.

It was horrifying and surreal. I felt so helpless, and I did not know what to do. I felt this whole sense of panic… and then was wondering what is going to happen next…. are there bombs going to go off…are we all in danger?

We knew we were not going to be playing baseball for a while., The game, the season…all of that was the farthest thing from our minds. After a couple of days, when communication was restored, you got in touch with the team, your teammates, you continued to watch these horrific images on TV, and you just felt so heartbroken, angry, and helpless. What could we possibly do at a time like this?

Then we all began to realize that one of things we could do was to go down there, as a team, and show our support to those working around the clock in the rescue effort. We went to see all the volunteers, the police, firemen, doctors, nurses, rescue workers, all those searching through the rubble . We went to the firehouses, the hospitals, shelters…I remember they had the Javitz center set up as a command center where responders could go and clean up, get fed and rest before they went right back out. I felt good doing it but at the same time my heart was breaking for the families grieving and those waiting for news about 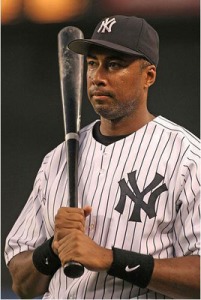 their missing loved ones.

I remember so vividly that in the middle of all the chaos and misery, that when we arrived and announced that the Yankees are here – I saw everyone stop . You saw the change in their faces. They lit up and said, “Wow, they are here”, and for even a few minutes, we were able to bring a little joy, and be a distraction to those who were going through so much sadness. That is what we were able to do, and if it brought smiles to people’s faces, we would be there. Like the entire Yankee organization, the Mets were terrific and were doing the same. We were all united, and that became our duty and how we could contribute those first few days following the attack.

I have told this story before, but what will always be with me is that we went to visit the armory, which was being used as a center where people were going to find out about their family members who were missing, and if they were being identified. Family members were showing up with personal effects of their loved one, anything with their DNA so they could work to find a match. It was heart wrenching to see all this. Well, I saw this lady there, and she looked so sad. Icould see was suffering so badly, and soon she was introduced to me. I believe she had lost her husband. My first impression was that I have no idea what to say to her. I’m not a psychologist, so what do you say to someone like that, and only thing I can come up with was to say “ I really don’t know what to say to you, but I think you could really use a hug”. So I just hugged her. She began to cry, and I began to cry…and it was moments like that put this all in perspective.

Ten years later, I think we as a city, and all of us in this nation, have become more vigilant. It has changed our way of life forever, but I think it has made us more

careful, more watchful, and we all look out for each other more than we used to. We have to be more mindful that there are bad people in this world who resent our freedom and way of life, and want to hurt us. Well, they learned that they can knock us down…but they also learned they will never knock us out. I am proud to be a New Yorker, and proud to be an American. My thoughts and prayers are with all the families, and every person who was impacted by the events of that day.

This Sunday, to commemorate the 10thanniversary of September 11th, I will be in Mt, Kisco, NY where a 9-11 Memorial will be dedicated in the center of town by the Fire Department. I am part of a band of local musicians, led by my friend and great sax player Mark Rivera. We will perform a concert in the fire house parking lot as part of the remembrance, and I am honored that I will be with my neighbors in the Westchester community on this most solemn day. We will get started at 4 pm. I hope all of you will be with family and friends on this day wherever you are, and together we can all pay tribute, in our own special way, to those who lost their lives, and be grateful to those who serve and protect us every day of our lives – here at home, and all over the world.

God Bless You All,

Everyone has a story like Bernie’s. You remember exactly where you were, and what you were doing when you heard of the tragic events that took place on that day. Thus it remains as one of the only days, if not the only day, from your life, that you can flashback to an exact date. You can close yours eyes and picture it. A nightmare of a picture, yet it’s one that you should put into a golden frame so that you never forget.

Although it is painful to remember back to September 11, 2001, it is something that is important to do, so that the heroes from that day are never forgotten. They musn’t be. For the heroes formed on that day were regular people, that were just doing their jobs.

“Remembering the past gives power to the present.”–Fae Myenne Ng