The Rangers went into last night’s game with their backs against the wall. A loss would give the Cardinal’s a chance to win the World Series in the very next game. While a win would at least guarantee a trip back to St. Louis. As Kevin Millar said, on yesterday’s episode of ‘Intentional Talk’, “It’s as close to a must win as it gets.”

On the mound for the Rangers in this game was their young lefty, Derek Holland. Holland, who’s had his 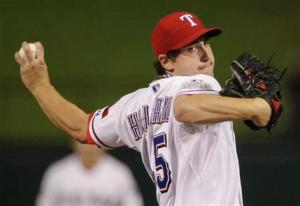 good games and bad games in the past, would have to pitch the best game of his life to keep the hot Cardinal bats from scoring in the early innings. He got off to a good start in the first, as he set down the first three batters, 1-2-3, including a strikeout of Allen Craig.

Moving on to the bottom of the first, the Cardinal’s had Edwin Jackson as their pitcher. His last start didn’t go as planned, and thus he was looking for a little bit of redemption in this game. But things didn’t go as planned again, as after a single by Elvis Andrus, Josh Hamilton hit a double down the right field line, allowing Andrus to score all the way from first. The score was 1-0, Rangers, just like that.

Moving onto the bottom of the sixth inning, Edwin Jackson found himself in a bit of a jam, after walking the second two batters of the inning. Tony LaRussa had seen enough, as he made the call to the bullpen to

bring in Mitchell Boggs. Things didn’t turn out as LaRussa had wished, as the first pitch thrown by Boggs was crushed by Mike Napoli over the left field wall. With that home run, Napoli became the first catcher to hit two homers in a Series since Mike Piazza of the Mets in 2000. The score now had the Rangers leading 4-0. With Holland pitching the way he was, you could pretty much feel that the game was as good as over.

Derek Holland, as mentioned earlier, had to pitch the game of his life in order for the Rangers to have a chance at winning. Well, not only did he pitch the game of his life , but he still had a shutout going into the ninth inning. Could he hold on for the complete game shutout? That’s the question everyone, including Ranger’s manager Ron Washington, was asking themselves. Everyone was on the edge of their seat in

anticipation. Holland retired the first batter of the inning on a groundout. Then after walking the next batter, Washington felt that Holland’s night was over, as he makes the trip out to the mound. You can tell by the look on Derek’s face that he wanted nothing more than to stay in the game, but Washington wouldn’t hear of it, as he called in Neftali Feliz to shut things down. That he did. Final score 4-0, Rangers. The series is now tied at two games a piece.