If you missed last night’s game, I feel sorry for you. You missed an unbelievable game. One of the best games in World Series history. It was truly remarkable what went down. Under the circumstances of last night’s game you expected the Cardinal’s to play their heart’s out to stay alive, but I don’t think anyone expected them to play the way they did.

The top of the first inning saw Cardinal’s starting pitcher, Jaime Garcia, giving up the lead off walk to Ian Kinsler. Garcia then proceeded to give up a single to Elvis Andrus, which allowed the speedy Kinsler to make it all the way to third, with no outs. Things then got worse for Garcia, as he allowed a single to Josh Hamilton, allowing Kinsler to score. It was 1-0, Rangers, just like that, with still no outs. But Garcia did a nice job of getting out of the inning with just the one run allowed, as he sat down the next three batters 1-2-3.

Moving onto the bottom of the second, Lance Berkman hammers a two run home run over the wall, with two outs. The score quickly became. 2-1, Cardinals. You knew then and there, that this was going to be a back and forth game.

Jumping ahead to the top of the seventh inning, the score is now tied, 4-4. Adrian Beltre, the leadoff batter, hits a solo home run. Not to be 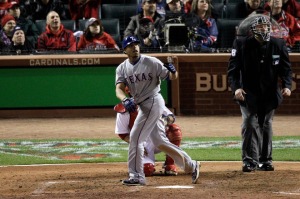 outdone, the next batter, Nelson Cruz, does the same. A solo home run to left field. Back-to-back home runs make the score 6-4, Rangers. Later in the inning, after reaching base safely on a bunt, Derek Holland is the runner at first. A wild pitch by the Cardinal’s pitcher, Octavio Dotel, to Ian Kinsler, allows Holland to advance to second, with two outs. Kinsler scores Holland on an RBI single to center. The Rangers are starting to smell the Championship. Up 7-4, with only nine outs left to get.

To make matters worse for the Cardinals, they go down 1-2-3, in the bottom of the seventh. The Rangers are now 6 outs from the World Series title.

In the bottom of the eighth, after getting the lead off batter out, the Rangers allow a solo home run to Allen Craig. The Cardinals fans can feel a rally. The score is now 7-5, Rangers.

After failing to extend their lead in the top of the ninth, the Rangers still seem to be in a good position. Up by two runs with only three outs left to 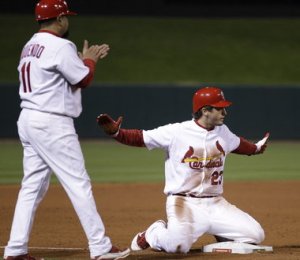 get, in the bottom half. Neftali Feliz comes in for the Rangers to try and close things down for the win. He does his job with the first batter, Ryan Theriot. The Rangers are now just two outs away from the World Series title. The next batter, Albert Pujols, makes things difficult for Feliz, by doubling to the center field gap. Neftali Feliz then walks the next batter, Lance Berkman. Just like that, the tying run is on first. The next batter, Allen Craig, strikes out looking, however. It all comes down to David Freese. Feliz quickly got ahead in the count. The Rangers are now just ONE strike away. But David Freese comes through will a fly ball to left field that bangs off the wall allowing both Albert Pujols and Lance Berkman to score. Freese makes it all the way to third. But the next batter, Yadier Molina, can’t get him home. Thus, sending the game to extra innings.

Top of the tenth, Josh Hamilton, who’s had a terrible post season, hits a two-run home run to center field, giving the Rangers a 9-7 lead. No way the Cardinals can recover from that blow right? Well, in the bottom of the tenth, after allowing the Cardinals to get runners to second and third, the Rangers give up a run for an out. There are now two outs, with the score 9-8, Rangers. Lance Berkman, the next batter, quickly gets a two strike count on him. The Cardinals are down to their last STRIKE yet again. This is the end of the game right? NO! With one strike left, Lance Berkman singles to center field, allowing Jon Jay to score from third. The score is now tied 9-9. Like I said, if you missed the game last night, I feel sorry for you. 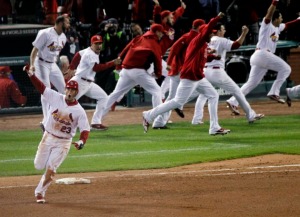 inning, David Freese–who came through for the Cardinal’s earlier in the game–comes through again with a walk off home run to center field. The Cardinals win, and force a game seven. Truly unbelievable. Maybe the rally squirrel does exist?!?

Eleven innings. Four hours and thirty-three minutes. A game for the books.

Tonight’s game is a MUST win for both the Cardinals and the Rangers. Win and you get the honor of being 2011 World Series Champions.

Will the Rangers loose for the second year in a row after getting so close? Or will they come out swinging, and win the first World Series title in their history? Watch tonight on FOX, to find out.

Although this series is unpredictable, please vote in the poll below: