I feel I’ve misjudged Bryce Harper. As many of you may know, I haven’t been a fan of his since I first heard of him. I felt he was an arrogant guy who saw himself as better than everyone else just because he happened to be ‘The Chosen One’. Now, seeing how he’s handled himself through his first week in the Major Leagues, I’m not so sure I gave him a fair chance.

My opinion was formed just like most other people, using the limited facts given to me 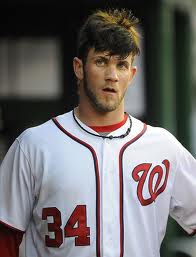 by the media, who tend to spin stories around to make bigger stories more often than not. Just because the media was telling me Harper was a jerk, I figured “well I guess he is”; and that was that.

Now, I feel Harper’s not as bad of a guy as the media made him seem. Yes, he’s arrogant, but as long as that arrogance stops when Harper’s not between the chalked lines, I have no problem with that. There’s a difference between arrogance, and an immense passion for the game of baseball. Harper has shown that he obviously has incredible baseball passion, as he gives ever play his all; playing like every game is his last.

Harper is too good of an athlete for me to not root for. The guy is extremely fun to watch, and while he hasn’t shown off the power yet, he’s impressed me a great deal. His speed is insane; as is his arm. Both are aspects of his game that I was aware were good, but I had no idea they were THAT good. It was truly a shock to me the first time I saw him show off the gun.

With the injury to Nationals’ right fielder Jayson Werth, Harper will be moved to fill Werth’s spot. He certainly has the arm for right field, and is sure to impress the first chance he gets.

Moving onto Sunday night’s game versus the Phillies.

Just when I thought Harper had done all he can do to impress me, he took it another step further in Sunday’s game against the Phillies. In Harper’s first at bat of the game he was hit in the side by a pitch from Cole Hamels. I was fully expecting a few words to be exchanged to say the least, but Harper proceeded to trot down to first base after taking a second to recover.

I feel that Harper has matured in that sense. Instead of making a scene, Harper was able to retaliate against Hamels by stealing home. (The first teenager to do so since 1964.)

It appeared as if Harper glared in the direction of Hamel’s as he headed into the dugout, but I have no problem with that.

Now, here’s where things get interesting. Cole Hamels came out on Monday and made the following statement, regarding his plunking of Harper:

My response to Hamels coming clean would be, “why?” Why come out and state that you hit him on purpose? Why not say the ball slipped, or whatever? It just doesn’t make sense 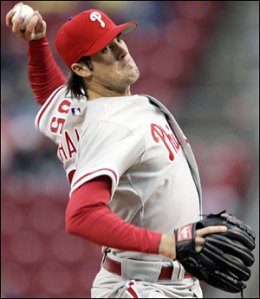 Sure, you can say Hamels was just trying to be honest, but it would appear that Phillies manager, Charlie Manuel, would agree with me. His response being:

I wish [Hamels had] been a little bit more, what do you call it, not so honest, or dishonest, or discreet, that might be the right word. What I saw was the next time Hamels came up to bat, they definitely retaliated, he got hit on the calf and he could have got hurt. If the guy would have hit him hard on the bone part of his leg, that could have hurt. … I like to think it was dropped right there and the rest of it will be done baseball-wise.

Major League Baseball made the decision to suspend Cole Hamles for five games (or one start) for intentionally hitting Harper. A lot of people feel that’s not long enough. I’m sure one of those people would be Nationals’ GM Mike Rizzo, who stated:

I’ve never seen a more classless, gutless [expletive] act in my 30 years in baseball. Cole Hamels says he’s old school? He’s the polar opposite of old school. He’s fake tough. He thinks he’s going to intimidate us after hitting our 19-year-old rookie who’s eight games into the big leagues? He doesn’t know who he’s dealing with.

I’m not sure I’d go as far as saying “he doesn’t know who he’s dealing with”, but I too don’t agree with the intentional plunking of Harper. It’s a sloppy situation all the way around.

No matter which side you’re on, or who you root for, this is an interesting story. This is how rivalries form. This is how you sell tickets, and thus fill ballparks. And to the suspected delight of Harper (who is known to love the spotlight) it can all be traced back to him.