Cody Buckel was drafted by the Texas Rangers in the 2nd round of the 2010 draft. Since the initial draft Buckel has done just about as well as you’d imagine a second round pick would do; completely dominating thus far. 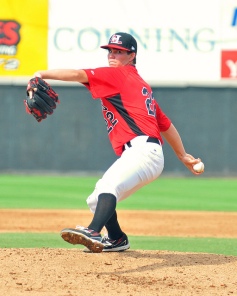 But it’s not as if dominating is new to Buckel, as he was able to do the same last season with low-A Hickory. Going 8-3, with a 2.61 ERA, as well as 120 strikeouts through 96.2 innings pitched. Good enough to earn Buckel a promotion to high-A Myrtle Beach for the 2012 season.

So far this season with the Pelican’s, Buckel has posted a 1.27 ERA through 11 starts. His win loss record stands at 4-2, but the thing that really stands out is his ability to get the strikeout. Buckel has struck out 81 batters in just 64 innings pitched. That comes out to 11.4 strikeouts per nine innings pitched. Truly remarkable numbers.

Cody Buckel–pitching prospect in the Texas Rangers organization–took the time recently to answer some of my questions:

1.) At what age did you first become interested in baseball? Did you always want to be a pitcher?

I started playing baseball at three years old. I found my interest in pitching at age eight, and wanted to be a pitcher since then.

Derek Jeter was my favorite player growing up. I just love how he approaches the game and how humble he is on the field and off. He plays hard and like it’s his last game everyday.

3.) You were drafted by the Rangers in the 2nd round of the 2010 draft. What was that process like for you? Where were you when you found out? Initial thoughts?

I was actually in my English class doing my final exam when I found out. I had my phone on my desk and told the teacher I might be getting a call that would start my career and she let me have it out. Fortunately I got the call from the Rangers and it was one of the happiest days of my life. I was excited to be a Ranger because a hall of fame pitcher being the owner of the team isn’t a bad thing to have.

4.) This is your 3rd season of professional baseball. What are your goals for this year? Anything specific that you’re currently working on to enable you to reach those goals?

Just trying to carry over from last years season to this year. I’ve tweaked some mechanical things and added a couple of pitches to my arsenal and they seem to be doing well out of the gate so far. I just need to be consistent through the year to continue to move up the ladder.

5.) What’s the most memorable moment of your baseball career thus far?

6.) When’s the first time someone asked for your autograph? Oddest thing you’ve ever signed?

First time someone asked for my autograph was one of my USA baseball cards. It felt weird signing a card of myself because I was the one asking for autographs not too long before that. Weirdest thing I signed was someones back. Haha.

7.) What’s your favorite thing to do on an off day during the season?

Definitely play a round of golf or just go to the mall or movies and chill, but if I can get out on a golf course I’ll be out there wearing my puma attire.

‘How I Met Your Mother’.

I would say no matter how long you play to make sure the game is always fun! Also, working hard and keeping up on your routines will pay off and create luck for you, and the game becomes even more fun when you have success.

Big thanks to Cody Buckel for taking the time to answer my questions.