The forecast for this game was rain; and rain it did–up until around 5:00, when I left for Durham, NC. Luckily, when I arrived to the ballpark at around 5:45, the dry spell continued, and I was able to grab a spot near the front of the line without having to get soaked.

Gate 1 already had tons of people lined up behind it when I arrived, so I headed over to Gate 2. Behind Gates 1 and 2 there were two lines (normally four) in which you could enter the ballpark, and just my luck, I picked the wrong one. The lady that was scanning tickets had no idea what she was doing. Heck, she couldn’t even figure out how to get the gate open, as she had to wave down an orange shirt employee to come help her out. (As you can kind of see in the left portion of this photo posted by the Durham Bulls):

I was able to cut my way into the other line, but it really didn’t help. I was stuck outside Gate 2, as people filed in through Gate 1.

All I could do was watch as dozens of people entered the ballpark–many of which I assumed were headed down to the dugouts (just like I was planning to do) to get autographs. Finally–after what seemed like an eternity of waiting–I made my way into the ballpark and down to the extremely crowded Pawtucket Red Sox dugout.

Going into this game I had made the decision that I wanted to go for autos from Pawtucket Red Sox’ players such as Danny Valencia, Bryce Brentz, etc., instead of Reno Aces standouts like Trevor Bauer, A.J. Pollock, etc. Unfortunately for me Danny Valencia didn’t sign, and Bryce Brentz signed for everyone BUT me. Meanwhile, I watched as the entire Reno Aces team (or so it seemed) signed for everyone who wanted an autograph.

It was one of those days.

After it became evident that I had failed in getting autos from the players I wanted, I made my first logical decision of the day. I knew American Idol Season 10 winner Scotty McCreery was going to be throwing out the first pitch, so I made my way over to the Reno Aces dugout where I predicted he would come out from. Sure enough, after a few minutes of waiting, Scotty emerged from the clubhouse:

He signed autographs for ten or so people that wanted it. Thankfully, I was one of the ten.

McCreery then proceeded to make his way out to the mound to throw out the first pitch:

After firing a strike, Scotty posed for a picture with the Bulls’ mascot, Wool E. Bull:

But enough about Scotty. Let me get back to the game….

The starting pitchers for both teams–Trevor Bauer, for the Aces, and Nelson Figueroa, for the Red Sox–had both been great so far in the post season…:

…but in the end only one could be crowned Triple-A National Champions. It was going to come down to which lineup performed better on this particular day, as you had to figure the pitching was going to be stellar.

My view at the start of the game (from my ticketed seat) was this:

Not bad for a game that’s the MiLB equivalent of a World Series game 7.

Did you notice how empty the outfield seats were in the picture above? Well, the desire to snag a home run ball got the better of me, as this soon became my view:

Had a ball of been hit anywhere near me I would’ve been all over it. But to keep with the luck of the day, nothing came close.

I sat out there for a few innings, but around the 6th inning it began to rain so I headed back to my original seat (which happened to sheltered). On my way back I was surprised at how many people were making their way towards the exits. I mean, come on. I realize the Red Sox were getting killed—the rain didn’t make it any better–but this was the Triple-A National Championship. How could you leave early?! I don’t get it.

By the time the ninth inning rolled around there weren’t that many people left: 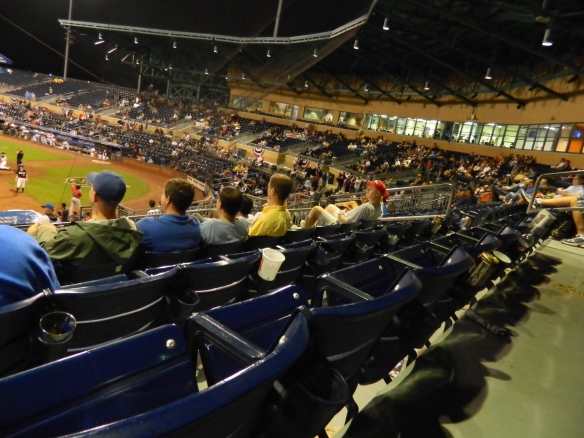 Soon after taking that picture I decided to move down a little closer to the field. My view of the final out (and the victory celebration by the Reno Aces) came from the first base side of the ballpark…:

…but my view of the trophy presentation came from the third base side:

I don’t know if you can tell, but it was raining fairly heavily. I stuck it out long enough to see A.J. Pollock received his trophy for M.V.P:

Shortly thereafter, however, I made my way out of the ballpark.

I want to take a second to say congrats to the Reno Aces. They were extremely impressive in their 10-3 victory. I had a feeling that they would come out on top–as they had top prospect Trevor Bauer on the mound, backed by an impressive lineup–but anytime you go up against a team that had gone 6-1 in the playoffs up to that point, you never really know what the outcome may be.

As stated in my last blog entry, this was my final baseball game of the year. This is not, however, my last blog entry of the year by any means. There’s still a couple weeks left in MLB’s regualr season, followed by the play offs, and the World Series, so I’ll have plenty to blog about in the weeks/months to come….