David Ortiz didn’t waste any time extending his hit streak to 27 straight games in Tuesday’s game versus the Twins, singling in his first at-bat of the game. Given, only 15 of the games in Ortiz’s streak have come this year, with the remaining 12 carrying over from last season, but it’s still an 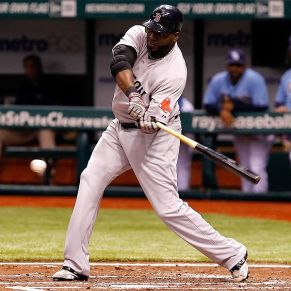 impressive streak, nonetheless. Which begs the question: When do you need to start paying attention to a hit streak?

To me, a hit streak doesn’t become worthwhile until a player passes the 30 game mark. Up until then, it’s not all that rare of a feat. But once a player begins to climb up through the thirties, as a baseball fan, you generally begin to pay attention–speculating how far the particular player can take it.

Of course, the all-time hit streak is held by Joe DiMaggio, who hit in an unbelievable stretch of 56 straight games, from May 15, 1941 through July 16, 1941. A record which many believe will never be broken–the ultimate feat for a baseball player.

But while it’s a long-shot that Ortiz will go on to pass Joe DiMaggio–if he does, playing in every game, the record breaking hit will take place on June 8th in Boston–many are disputing over whether it should count as a streak at all; saying that a true hit streak is one that takes place over the course of a single season. I somewhat agree, but at the same time, I’d love to see a guy like David Ortiz be the one to break the record. He’s one of those guys who you can’t help but root for.

David Ortiz went hitless in his next game, ending his streak at 27 games.