After rehabbing a broken ankle for nearly nine months, Derek Jeter received a standing ovation on Thursday, in his first major league plate appearance since October of 2012. Reaching first, in his first at-bat of the game, on an infield single, Jeter showed all of the baseball world what he’s been hoping to show for a long time: His ankle is fully healed. 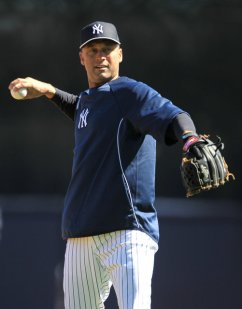 The Yankees finally have their Captain back.

But it’s going to take a lot more than the return of Jeter, who went 1-4 in his 2013 debut, for the Yankees to turn around what has been a downhill slide as of late. While they won in their first game with Jeter back, he’s not the player he used to be, and they could use even more help.

But help is coming, in the form of Alex Rodriguez, who is currently down in the minors, working his way back from hip surgery. How much help he will provide is yet to be seen, but the Yankees are hopeful that A-Rod can return to even a portion of his former self.

Either way, I’m not counting out the Yankees just yet. I’ve had them making the playoffs since the beginning of the season, despite the majority of baseball fans thinking otherwise. It will be interesting to see how things play out after the All-Star break.

The rosters for the 2013 All-Star game were announced late last week, however, fans around the country have been voting all week long for the player they feel most deserved to receive the final spot for each league.

The candidates for the American League included Joaquin Benoit, Steve Delabar, David Robertson, Tanner Scheppers and Koji Uehara. The National League had Ian Desmond, Freddie Freeman, Adrian Gonzalez, Hunter Pence and Yasiel Puig. I was hoping to see David Robertson and Yasiel Puig make it in, but neither did.

It was announced Thursday afternoon that the winners of the All-Star game final vote were Steve Delabar and Freddie Freeman. While I’m not all that upset with either of them getting voted in, I disagree with Freeman over Puig. There’s no player in the major leagues at the moment with more hype around him than Puig. I don’t understand why he didn’t make it in, other than maybe the fact that he’s been in the big leagues for merely a month, but I’m really looking forward to watching the game, nonetheless.

The All-Star game is set to take place on Tuesday, July 16th, at Citi Field.