The final MLB games until after the All-Star break were played on Sunday, and although the baseball world is buzzing about Yoenis Cespedes winning the 2013 Home Run Derby, with it being half way through the season, I figured I’d post a blog entry not on the derby, but on the players who I feel stand the best chance, as of right now, to win the three major awards of Most Valuable Player, Rookie of the Year and Cy Young. All three awards have several players who could be argued are worthy, but I have my own opinion as to who deserves each award the most.

American League: It’s a two-man race for who deserves the MVP award for the American League. Both Chris Davis and Miguel Cabrera have already posted numbers that would be a great full year for many players, and there’s still nearly three more months left until the end of the season. But I’m going to have to go with Chris Davis, as of right now. Davis has been one of the best players in all of baseball for the past year, and if he can keep up the pace, should be the AL MVP.

National League: It’s a little more of a challenge to pick one player for who will inevitably win the National League MVP, assuming they keep on playing the way they have been. With guys like Yadier Molina, Michael Cuddyer and Buster Posey in the running, it’s not a very obvious choice. I’m going to go with Michael Cuddyer, though. While Posey and Molina are having great years, Cuddyer is making a bigger individual impact on whether or not his team wins than anyone else in the NL.

Rookie of the Year Award

American League: This was the easiest of all of the categories, for me. There’s no doubt in my mind that Wil Myers deserves the American League Rookie of the Year award. Altough I gave a bit of consideration to both Nick Franklin and David Lough, I just feel that Myers is going to have an even better second half to the season than any rookie in baseball. If he can play to his full potential, he should be able to blow away all of the other competition.

National League: It came down to Yasiel Puig, Matt Adams, Jedd Gyorko, Evan Gattis and Marcel Ozuna, for the player I felt most deserved the National League Rookie of the Year award, as of right now. All of them have been having fantastic seasons, and while they should continue to have great years, I had to go with Matt Adams. I still like Puig, and feel he will be a super star for years to come, but Adams deserves the award, in my opinion. The way he’s been contributing is truly incredible. 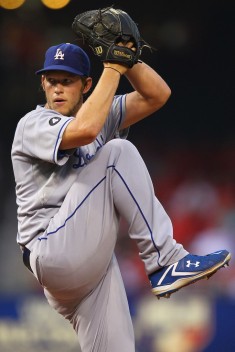 American League: When you have to pick between Felix Hernandez, Bartolo Colon and Max Scherzer, for American League Cy Young, it’s not an easy choice. All have been having great seasons, and you can make an argument for and against each player. But after going back and forth between them, I ended up going with Max Scherzer. While it would appear an easy decision, with Scherzer’s record of 13-1, it wasn’t. Eight AL pitchers have a better ERA, but when you combine everything, I still have Scherzer for the Cy Young.

National League: I had several different pitchers on my list of players deserving of the National League Cy Young award, including guys like Matt Harvey, Jeff Locke, Adam Wainwright, Patrick Corbin, Jordan Zimmermann and Madison Bumgarner, but I didn’t go with any of them. I ended up going with Clayton Kershaw. While I’m a huge fan of Harvey, and could’ve easily picked him, Kershaw is having the overall better year, and that’s why I have him winning the award.

But there’s still plenty of time left in the season, and anything can happen.

With all of that said, this will be my last blog post for a good bit of time.

I’m going on a 24-day road trip around the country, starting Wednesday, and won’t have the time to put in the effort necessary to keep up this blog. Though I hate breaking one of my original goals of blogging at least once every four days, it can’t be helped; but I’m still on pace for my goal of 100 posts for the year. At least I’m incorporating baseball into the trip, among numerous other things, as I’ll be attending the Mariners game in Seattle, on July 26th, versus the Twins. So that should be fun. (I haven’t decided yet if I’ll be blogging about the game.)

Therefore, this is all for awhile. I’ll be back in a month.