Twenty-one years since playing for the Bulls, Chipper Jones is returning to Durham.

Jones is set to join Crash Davis, Joe Morgan and Bill Evers as the only players to ever have their number retired by the Bulls, in a 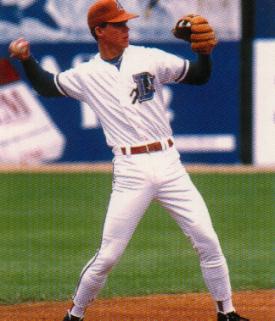 retirement ceremony on Tuesday. Morgan currently holds the distinction of being the only Bull to go on to be inducted into the National Baseball Hall of Fame, but that’s likely to change, once Chipper becomes eligible a few years down the road.

Jones played with the Bulls for a total of 70 games during the 1992 season, in which he batted .277 with four home runs and 31 RBIs. This coming back when the Bulls were the Class-A affiliate of the Braves, Jones would go on to become an eight-time All-Star, playing for the Braves his entire career.

The uniform number retirement ceremony for Chipper Jones is set to take place at around 7:00, before tomorrow night’s Bulls game. And I’m planning to be there.

Gates are set to open at 5:30, and I’m hoping to be one of the first inside. This will more than likely be my last time seeing Chipper, and I’m optimistic that I’ll be able to get his autograph. (I’m going to try to get it on a 2012 All-Star baseball, that I won last year in a Twitter contest.) But no matter what happens, it’s sure to be an exciting night, and I’ll be sure to blog about it all on Wednesday.

But as if that’s not enough baseball excitement for one week, I’m also planning to attend Saturday’s Bulls game, versus the Norfolk Tides (AAA affiliate of the Orioles).

The Tides are loaded with great players and prospects, with the most notable being Orioles number one and number five prospects, Kevin Gausman and Jonathan Schoop, who have both been having great seasons. I’m hoping to pick up an autograph from both. (Eric Thames, Zach Britton, Danny Valencia and Freddy Garcia being the other players I’m after for an auto.)

I haven’t yet decided whether or not I’ll be blogging about Saturday’s game, but you never know. It really depends on if anything out of the ordinary occurs, and how much else is going on around the rest of the baseball world. So, stay tuned….