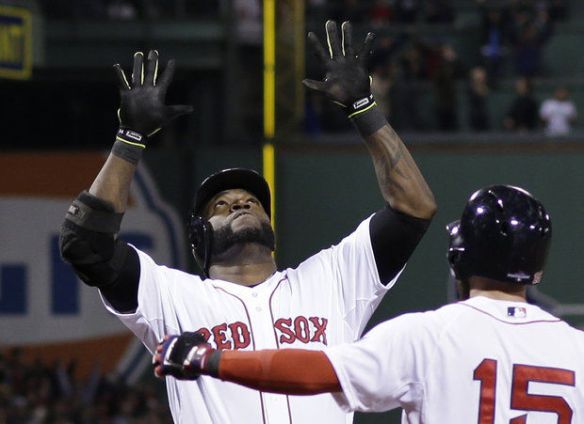 After nearly getting no-hit, and striking out 17 times, in Game 1 of the American League Championship series on Saturday night, the Red Sox went into Sunday’s game looking to redeem themselves in a pivotal Game 2. Though the Red Sox have done some amazing things in the past — coming back from a 3 game deficit to the Yankees in 2004, to go onto win the World Series — you had to figure that this game was a must win for them the way they’ve been playing lately.

But it wasn’t looking too promising for the Sox early on.

The Tigers came out swinging, putting up a quick five runs. In addition, Max Scherzer was dominant to start the game, as he has been all season long, going 5.2 innings before allowing a hit; a single to Shane Victorino. Dustin Pedroia promptly drove him in, however, for the Sox’ first run of the series, taking their early deficit from five to four runs.

From there, the Red Sox strung together multiple hits in the eighth to load the bases for David Ortiz. As he has done time and time again throughout his career, Ortiz came through, blasting a game tying grand slam into the bullpen.

The Red Sox would go onto win the game in the ninth inning, on a walk-off RBI single from Jarrod Saltalamacchia — truly making this one of the best games in recent postseason history.

Although the Red Sox face a difficult road, going up against Justin Verlander in game three on Tuesday, if Sunday night’s game taught us anything it’s that the Red Sox have the ability to come through no matter how bad the odds seem to be against them.

It looks to be an exciting remainder of the ALCS.