Ethan Chapman was drafted by the Royals in the 30th round of the 2012 draft. Since the draft, Chapman has put together a couple of 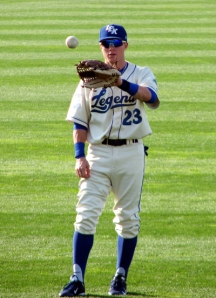 Dividing the 2013 season between Low-A and High-A, Chapman put together another similar year, though his offensive statistics were a bit lower than the previous year. But Chapman was able to show off his athleticism on multiple occasions, making great plays in the outfield, and stealing 32 bases.

If Chapman can continue to develop, he could find himself moving up the ladder in the years to come.

Ethan Chapman — prospect in the Royals organization — took the time recently to answer some of my questions:

There are videos of me hitting off the tee at two years old. My biggest influence had to be my dad. We always played catch; countless visits to the field for batting practice. He really sacrificed a lot for me.

My favorite player growing up was Ken Griffey Jr. We are both left handed, and he had the sweetest swing — a swing that every player strives for.

3.) You were drafted by the Royals in the 30th round of the 2012 draft. What was that process like for you? Where were you when you first found out? Initial thoughts?

Getting drafted was my biggest dream. Growing up playing baseball, every kid dreams of being drafted. It was a dream come true. All the hours of work I put into my craft had paid off. I was at home watching with my family. After hearing my name there were plenty of emotions: screaming, crying, smiling, etc.

Being a later round draft pick, receiving the Player of the Year award meant a lot to me. It, in some ways, “put me in the map” in the Kansas City organization. This is a business, and keeping your name on the minds of executives is a must. It was a great honor that they were proud of me for the season that I had. A really great experience, and I thank the KC organization for that accolade.

5.) You divided this past season between Lexington and Wilmington. What difference, if any, did you see between the two levels, and compared to the level of baseball you had played up until that point?

When I started in Lexington (Low-A) most of the starting pitchers threw tons of heat. They were consistently throwing 96 MPH. In Wilmington (High-A) the starting pitchers toned down how fast they threw but added more movement, location and a secondary pitch. As you go up in organizations pitchers start to make less mistakes and know how to “fool” hitters more often.

I am proud of my 2013 season but there is always room for improvement. I will continue to work hard and grow in each aspect of my game. In 2014 I want to play hard, play the game right, and win a championship for my organization.

7.) Talk a little bit about life on the road: What’s the most difficult aspect of it? What do you do to pass the time?

Life on the road in the minors isn’t easy. It’s time away from family, friends and on buses for the most part. But we are lucky to see many parts of the world that I would not be able to see if it wasn’t for professional baseball. It makes you want to work hard to get to the big leagues so you can be with your loved ones and get the best of treatment.

8.) Is there any one stat that you pay attention to throughout the season? Or do you try to steer clear of them altogether?

Stats are important because we want to move through the organization, but you can’t focus on them as a player. Over 140 games, stats can change. You have to go out and focus on each game and getting wins.

I have a bunch of favorite TV shows: MLB Network, ‘Boy Meets World’, ‘Pawn Stars’ [and] ‘Law and Order SVU’. My favorite food has to be Italian food. I love pizza and pasta.

Big thanks to Ethan Chapman for taking the time to answer my questions.