Normally I don’t blog about trades around Major League Baseball, no matter how big they may be — even huge trades like the one that took place Wednesday evening. But this particular trade — though it only included two players — was so complex and intriguing that I couldn’t help but want to post my thoughts on it. It’s one of those blockbuster trades that doesn’t happen all that often. 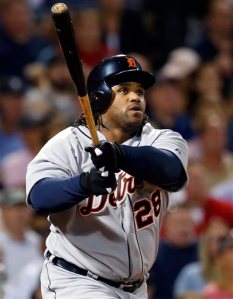 The Detroit Tigers announced plans yesterday to send Prince Fielder, and thirty million dollars, to the Texas Rangers, in a trade for Ian Kinsler.

While at first glance it would seem that this is a one-sided trade — Fielder is undoubtedly the better hitter — when you take the time to consider every aspect, I see it as being a nearly even deal.

The Tigers were running into a dilemma, having too little money to afford resigning their Cy Young winner Max Scherzer, and it was going to take a deal such as this one to free up enough money to keep him around. (Trading Fielder saves them nearly 100 million dollars.)

While loosing Fielder, who hit 25 home runs and drove in 106 runs in 2013, in return for Kinsler, who hit 13 homers to go along with 71 RBI’s, is a big loss offensively, it gives the Tigers a lot of options defensively for their infield.

Those options include moving Miguel Cabrera back to first base, who doesn’t really have the range for third but had been moved there upon Fielder’s arrival in 2012. The move of Cabrera would free up the position for the Tigers’ number one prospect, Nick Castellanos, who was being converted into an outfielder, but will likely return to his origninal spot. Jose Iglesias will remain at short,

with Kinsler taking over at second base.

On the Rangers side of things, they get a big time power hitter, and give up an average hitter who will be replaced by their highly regarded prospect, Jurickson Profar, who had nowhere to go with Kinsler and Elvis Andrus in the mix at second and short stop.

Though the Rangers take on a lot of money for Fielder’s contract — he’s still owed 138 million, after the Tigers paid 30 million of it — they get an everyday player (162 games for four out of the past five seasons) who will be an immediate impact; their first production at first base since Mark Teixeira left in 2007.

Many people still question whether or not the Rangers will attempt to make a run at Robinson Cano. I don’t see it happening, but you never know. They want another bat, but it will more than likely come from a guy such as Carlos Beltran, Brian McCann, etc., whom they are reportedly interested in. Cano may end up being a bit out of their comfort zone and price range, especially with it having to come at the cost of losing Andrus at short, where Profar would move, to free up money and space.

In the end, as far as I can see, the Tigers should easily be able to win their division, once again, with their improved infield arrangements. The Rangers, who have been the runner-up to the Athletic’s in the American League West Division the past two seasons, should now have the ability to make the jump to first place in 2014 with the addition of Fielder.

Only time will tell who truly “won” the deal, and how things will pan out.

But as far as I can see, neither team can go wrong moving forward.