Addison Russell was drafted by the Athletics in the first round of the 2012 draft. Since the draft, Russell has had a great deal of success, posting above average numbers for two straight seasons. 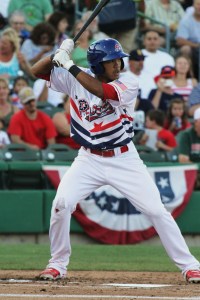 In addition to a great season statistically, Russell was selected to participate in the 2013 Futures Game up in New York City, making the 2013 season one to remember.

If Russell can continue to post the same type of numbers, it’s only a matter of time before he’s having memorable seasons at the Major League level.

Addison Russell — top prospect in the Athletics’ organization — took the time recently to answer some of my questions:

Around the age of five my father got me into it. He would be my biggest influence.

Barry Larkin. It just seemed like he was the ultimate role model. He was a great ball player and knows so much about the game.

3.) You were drafted by the Athletics in the 1st round of the 2012 draft. What was that process like for you? Where were you when you first found out? Initial thoughts?

I was at home in Pensacola, Florida. That day I was having a graduation party, so I had friends and family there to share the experience. Really, I had no idea where I was going to be picked at. But Oakland picked me 11th overall. It was all a blur. I just remember being too excited to actually pursue my dream job.

4.) You worked really hard to get in better physical shape in your last year of high school before getting drafted. How much do you attribute that work in the year before the draft to your extremely successful first (half) season in 2012?

I had to work hard. I just want to be the best I can be. Everyday running, in the weight room everyday — and also working on my skills and craft.

5.) Though you began the 2013 season a bit slow, you turned things around to have another successful year. What enabled you to turn around your season?

Just slow the game down and get my pitch and take advantage of it.

6.) You were selected to play in the 2013 Futures game, up in New York City, in July. What was that experience like? What did you take away from the game that you plan to use moving forward?

It was a great experience. I got to play with future big leaguers. What I took from the experience was that there’s a lot great players out there, and I can play with them. My work ethic will be my key. Always improving my craft in all aspects of the game

7.) The Athletics moved you all the way up to Triple-A at the very end of the 2013 season, where you had the opportunity to play in the playoffs. How was the playoff atmosphere different than any other level of baseball you had ever played up until that point?

It’s more hyped up. It’s a big move. I was just blessed to get the experience.

I felt alright. I felt early on I could’ve done things a little better. I finished up the year strong. Looking back, I think I had a good year. My goals for next year is just to make the adjustment early.

My favorite show is ‘Duck Dynasty’, and I absolutely love pizza.

Don’t let people tell you what you can’t do. Work hard everyday. Keep goals, keep achieving them, and strive to be the best you that you can be.

Big thanks to Addison Russell for taking the time to answer my questions.

2 thoughts on “Q and A With Addison Russell”