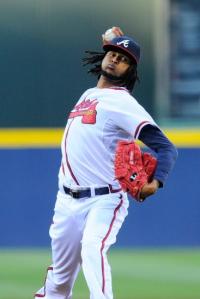 But it didn’t appear that it would turn out that way.

When the Braves announced last month the loss of two of their big name starters, Kris Medlen and Brandon Beachy, for the entire season due to Tommy John surgery, many people felt that it was a crushing blow to the team, and would keep the Braves from doing much of anything this year.

However, despite a few poor games, the Braves currently stand at the top of the division, having had great pitching and an explosive offense leading the way as of late.

A lot of the great pitching is coming from guys you wouldn’t necessarily expect to dominate. With Medlen and Beachy out for the season, and Mike Minor out for a little while longer, the Braves don’t have any front line starters beyond Julio Teheran. But their offseason additions of Aaron Harang and Ervin Santana are proving to be well worth it, as they are pitching like top notch pitchers so far.

For Santana, though it took all offseason for him to find a team, it’s looking like the one-year, 14.1 million dollar deal he agreed to could be a bargain for the Braves. Having so few pitching options heading into the season, the Braves picked up Santana merely because they were weak in starting pitching and needed a boost. Coming off a decent season of a 9-10 record with a 3.24 ERA for the Royals in 2013, Santana certainly had the ability to provide the upgrade.

However, I’m not sure anyone predicted Santana to be so good so soon. In his first start of the season against the Mets, Santana threw eight scoreless innings, earning the win as well as the respect of a lot of people around the baseball world. Going into his second start on Monday night, all eyes were on Santana again, and he was even better, overall. Striking out eleven batters in six one-run innings, Santana dominated, yet again, but had to settle for a no decision, due to poor relief pitching by the Braves’ bullpen.

While there are still a lot of critics who feel that the Braves will fall down behind the Nationals in the division standings as the season goes on, if their pitching can continue to be consistent along with their offense, they could surprise people, with Ervin Santana being a big reason for their success.