Tyler Danish was drafted by the White Sox in the 2nd round of the 2013 draft, after not allowing an earned run over 94 high school innings in Florida during his senior year, in which he struck out 156. 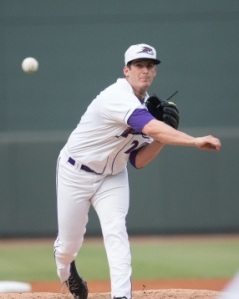 Since the draft, Danish has posted some fantastic numbers between three different levels, proving why he was worthy of a high draft pick. Possessing a good mid 90’s fastball, along with a slider and changeup — a combination that keeps hitters off balance — one of the things that makes Danish so deceptive is his mechanics. Throwing from a 3/4 arm slot, many people see Danish as being perfect for a high-leverage situation major league reliever, but Danish wants to be a starter if at all possible.

Danish certainly made a strong case this past season for being a starting pitcher moving forward, as despite some struggles at times, he went a combined 8-3 with a 2.08 ERA over 25 starts between Kannapolis and Winston-Salem, holding opponents to a .237 batting average.

Either way, as a starter or reliever, it’s likely not going to be too much longer until Danish makes it to the big leagues if he can continue to perform at the level he has to this point in his career.

Tyler Danish — top prospect in the White Sox’ organization — took the time recently to answer some of my questions:

Baseball was my passion ever since I could remember. I started playing at three years old. My parents were huge influences in my baseball career. They [were] there through it all with me.

The Captain [Derek Jeter]. Just the quiet swagger he had on the field. I just loved it.

3.) You were drafted by the White Sox in the 2nd round of the 2013 draft. What was that process like for you? Where were you when you first found out? Initial thoughts?

The draft process is a very stressful process. It’s an interview with 30 teams to show why you should be picked, but it’s also a fun process to go through. It’s a dream at 18 years old to even be considered as one of the best in the country. When I first found out, I was at home watching the draft when I saw my name come across the board. It was one of the best feelings, knowing all this work and time you put in finally showed up.

4.) You were promoted to High-A Winston-Salem in May after performing so well at Single-A Kannapolis. Upon your promotion, you struggled a bit, finally finding your groove towards the end of the season. What about High-A was initially hard to adjust to? What changes, if any, did you make to become effective once again to finish the year?

5.) You were used primarily as a relief pitcher in 2013, but made 25 starts in 2014. Why was it important to you to prove that you could be an effective starter when so many people see you as a future reliever?

This year was huge to show people I could be a starter because so many people doubt me and say I can’t. But with my personality — I love that. I feast on when people say I can’t do something. So that was my thought every time I took the mound this year: “Prove doubters wrong”.

6.) Part of the reason people envision you as a future major league relief pitcher is your unique delivery of throwing out of a three-quarters arm slot. Where and when did you first develop your delivery? How much do you attribute your deceptive delivery to your success on the mound?

That motion came from me playing shortstop since I was little. It was a natural feeling on the mound, but I didn’t start throwing like that until my junior year in high school. I used to be your traditional right hander, straight over the top, but my ball didn’t move, and I was topping out at 86 my sophomore year. One day at practice in a bullpen session I dropped down to the 3/4 arm slot and my ball moved everywhere. So I stuck with it and my velocity went up. I think that there is a little deceptiveness with how I throw just because it’s funky and a new look to hitters.

7.) Talk a little bit about life on the road: What’s the most difficult aspect of it? What do you do to pass the time?

Life on the road has its up and downs. Downs are definitely the bus rides; they can get very long and boring. But other than that you see new places, you play at different stadiums and you’re also playing professional baseball. To pass the time I watch Netflix constantly. That’s what I do all day, every day. Let me just say: Thank God for Netflix.

My 2014 year couldn’t have gone any better. I became a better pitcher in all aspects. I finally failed in pro ball, and I show myself that I can bounce back from that. So later on down the road when I struggle again I know it’s not the end of the world. I also had a lot of success, but I handled that very well too. I didn’t get too high, and I continue to work everyday to be better at what I do. Goal for 2015 is to continue to work and get better. My top goal, though, is to pitch in the big leagues next year.

Favorite TV show has to be ‘Law & Order SVU’. Favorite food is Chipotle.

For kids just starting the dream to hopefully one day play professional baseball — never give up no matter what happens in life. Don’t give up on your dream. Dreams do come true. But always work hard. Always give everything you have, even if you don’t want to. Respect your parents; they do a lot for you. Even if you don’t see it right now, they do. Make good grades, and stay out of trouble!

Big thanks to Tyler Danish for taking the time to answer my questions.