When Derek Jeter homered for his 3,000th career hit, the moment was magical. When Alex Rodriguez did the same on Friday night, the moment was controversial. The fans cheered, they acknowledged the historic moment, but there was a lingering feeling that things just weren’t the same. 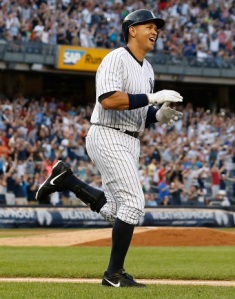 Although Rodriguez has played in 63 games since returning from a season long performance enhancing drug suspension in 2014, the air around A-Rod is still rather bad. The majority of baseball fans have vowed to never get over his PED use and don’t see the milestone as much to celebrate. While I agree to an extent, A-Rod’s 3,000th hit is still something to stop and think about for a moment.

After all, only 28 other players in the history of Major League Baseball have ever recorded 3,000 or more hits in their careers — 28 out of over 18,000 players. In addition, Mike Schmidt and Derek Jeter are the only other players to record their 3,000th hits on a home run. So the hit by A-Rod shouldn’t be completely overlooked.

But at the same time, the moment won’t ever be seen in the same light as it should have been if A-Rod had remained clean. Rodriguez is creeping up towards 700 home runs, and is one of only five players to record 3,000+ hits and 500+ homers, joining Hank Aaron, Willie Mays, Eddie Murray and Rafael Palmeiro. He’s one of the all-time greats. Rodriguez should be getting celebrations around baseball, but instead he’s getting booed by many of the fans everywhere he goes.

And rightfully so. I don’t agree that a player who recorded 3,000 hits clean and one who used PED’s throughout their career should be looked at in the same light, even if it is a remarkably rare achievement. But, thankfully, it shouldn’t be too long before we get the chance to wholeheartedly celebrate a player reaching 3,000 career hits: Ichiro Suzuki, who is just 114 hits away.