Sunday marked the last day of MLB games until after the All-Star break, and although the baseball world is looking forward to seeing baseball’s best sluggers put on a show in the home run derby, I wanted to quickly focus my attention on the players who have posted amazing performances throughout the first half of the season.

For this post, I’m covering the players who I feel stand the best chance right now (given, it’s still early) of winning the three major awards of Most Valuable Player, Rookie of the Year and Cy Young. All three awards have multiple players who can be argued as being deserving, but I have my own opinion as to who deserves each award the most at this point in the season.

After a couple of seasons of getting beaten out for the award by Miguel Cabrera, Trout is finally breaking out into an every season Most Valuable Player. Already having blasted 26 home runs, and well on his way to another 100+ run year, Trout could be picking up another MVP at the season’s end.

I nearly went with Bryce Harper for this category, and when all is said and done, he very well may win it. But there is no ignoring what Paul Goldschmidt is doing for the Diamondback’s. With a .340 batting average, 21 homers and 70 RBI’s, Goldschmidt is having an MVP caliber season.

Rookie of the Year Award 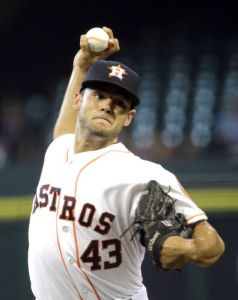 Picking Lance McCullers Jr. was by no means an easy choice, as there are a few other pitchers and position players that have stats that stand out, but I decided that he was currently the leader. With a 2.52 ERA over 11 games started, McCullers is really impressing a lot of people around the baseball world.

It is somewhat difficult to pick between Joc Pederson and Kris Bryant for who deserves the award, but I ended up going with Pederson. Despite batting in the lower .200’s, Pederson’s 20 home runs so far is extremely impressive for a rookie. In my mind, that’s enough to earn him the award.

Although there is a good amount of competition at the break for the American League Cy Young award, Sonny Gray leads the charge. With a 2.04 ERA over 18 games started, and an opponent batting average below .200, Gray is in a good spot if he can keep pitching the way he has.

Once again, there’s a Dodgers pitcher out in front of the candidates for Cy Young award, but this time it’s not Clayton Kershaw. Instead, Kershaw’s teammate, Zack Greinke, is the one dominating the league. With an incredible ERA of 1.39 after 123.1 innings pitched, Greinke would have to fall apart to not win the award.

Whether or not you agree or disagree with my picks for who deserves each award at this point in the season, one thing is for sure: there is still a lot of season left where any player can have anything happen. With 15 of the 30 teams at .500 or better, in terms of wins-losses go, regardless of the award races, the games following the mid-summer classic are sure to make for an exciting second half.