Ever since Babe Ruth burst onto the scene in 1919 with his single-season record breaking year of 29 home runs (more than some entire teams back then) — subsequently leading to his many superstar seasons that included 60 home runs in 1927 — baseball has been in love with the long ball. In fact, ever since 1983 there has been at least one player each and every season to hit 40 or more home runs, showing just how much baseball has come to depend on the big fly.

With 40 home runs no longer being quite the extraordinary feat that it was back when Ruth was in the middle of his Hall of Fame career — nine total players hit 40+ in 2015 — the new number of astonishment has risen to 50 or more homers in a season, which hasn’t been done in the past two seasons.

The most recent player with 50 or more homers in a season was Chris Davis in 2013, when he hit 53 with the Orioles. But I feel that there is a good chance of at least one player basting 50 homers in 2016, with the slightest of chances that multiple players accomplish the feat.

Of all of the player in baseball, there are three who I feel stand the best shot at 50 this season: Giancarlo Stanton, Chris Davis and Bryce Harper.

Giancarlo Stanton was injured for most of the 2015 season, but as history has shown, he has just as much power as anyone in baseball right now, and is right up there with the all time great power hitters. In the 74 games he did play in 2015, Stanton blasted 27 home runs. If you were simply to double those numbers, Stanton would’ve theoretically hit 54 home runs in 148 games played. While those numbers can’t be taken literally, due to them being mere projections, Stanton undoubtedly has 50+ home run potential, and with the Marlins moving in the fences, I think 2016 will finally be his year if he can stay healthy. 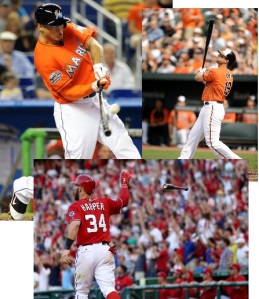 But even though Stanton has the best shot at 50, I think Chris Davis, who is no stranger to big production numbers, has a good chance as well. In 2015, Davis hit 47 home runs, but had 4-5 additional homers robbed by fantastic plays in the outfield over the season. Even so, Davis actually has a 50-homer season under his belt, as previously stated, hitting 53 in 2013. Returning to the Orioles for the next seven seasons, Davis is likely to hit well over 200 home runs over the course of that contract, and I could easily see him popping 50 of them in 2016 alone.

The last of the players on my top three 50 homer candidates list is Bryce Harper. He’s still extremely young, at just 23 years old, but having hit 42 home runs last season, I could envision 50 from him in 2016. His power is undeniable, and with him taking a fantastic approach at the plate last year — either drawing a walk or waiting for his pitch and crushing it — I think Harper will continue to produce MVP caliber numbers for the next several seasons. Whether or not he surpasses 50 homers in 2016 is yet to be seen, but it is certainly not out of the question.

Despite the fact that Spring Training hasn’t even begun, it’s never too early to glance towards the regular season, and I have the feeling that 2016 is going to be an unbelievable year around Major League Baseball. Although there’s the chance that my prediction is way off and no players at all hit 50 or more home runs this coming season, the potential for it to occur is there. That’s more than enough reason to get people around the baseball world excited for the regular season to get underway in less than two months.