Each and every season, there are always players with something to prove. Whether they’re looking to show that they can play at a competitive level that they’ve never lived up to; looking to show that they can be the dominant player they once were; or simply are looking for a good year for their team to have a successful year — there are numerous players that you could categorize as having a very important season coming up when things begin in around a month.

With all of that said, not every player that needs a good 2016 season is on the list I put together below. I can think of a couple dozen players that arguably need to post solid numbers in 2016, but I couldn’t include them all, and had to make some difficult exclusions. Just the opposite, there could be a few players on my list that you don’t think need a good season. Either way, this is just a list of ten players — not necessarily the “top ten” — that I feel need a good 2016 season for one reason or another:

In 2015, Giancarlo Stanton got off to a superstar start. Blasting 27 home runs in his first 74 games, Stanton posted numbers equal to what you would expect out of a player with a 325 million dollar contract. However, things quickly came to a halt for yet another season when Stanton suffered an injury that would see him missing the remainder of the year. While Stanton’s ability to put up historic numbers is absolutely there (Stanton holds 50+ homer potential), he needs to stay on the field in order to produce in historic fashion. With the Marlins standing the slightest of chances to compete with the division favorite rival Nationals and Mets, they need every single player on their roster performing to the best of their ability, and that includes Stanton more than anyone else. 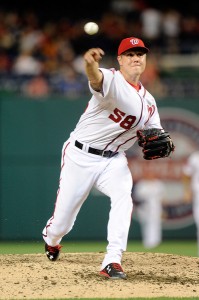 Over the course of the past few seasons, Jonathan Papelbon has very quietly remained one of the top relievers in baseball, and he had a great season in 2015. For that reason, poor stats aren’t the reason Papelbon needs a good year in 2016; it’s his personality that needs to become part of the past. Quite simply, Papelbon can be a distraction to any team he’s on, and has had his share of controversy over his career. The biggest example of that came just last season, when a dugout altercation between Papelbon and Bryce Harper ended up seeing Papelbon’s hands around Harper’s neck. Therefore, although he is a valuable part of the Nationals’ bullpen, with a 2.13 ERA last season, Papelbon needs a good, drama-free upcoming season to put the past in the past for good.

When Yu Darvish came to the United States for the 2012 season, he had a ton of hype hung over him as to the kind of pitcher he was back in Japan. In his rookie season, Darvish lived up to the high praise, and was even better in 2013. But after another great season in 2014, Darvish was shut down due to an arm injury which resulted in a subsequent Tommy John surgery that kept him out of the Rangers’ rotation all of last season. With that said, Darvish appears to have successfully rehabbed from the surgery and should help out the Rangers a great deal once he returns around May. After amazingly squeaking their way into the postseason last year, if the Rangers can get a fully healthy Darvish that performs the way he did to begin his career, they could be looking at a special season.

Of all of the players on my list, Ryan Howard is the only player who was on my 2015 version of this blog post. But he may also be the one who needs a good season the most — for his sake alone. Howard is essentially the last remaining player of what was once a Phillies dynasty that included the likes of Chase Utley, Jimmy Rollins and Cole Hamels, but he is most likely in his final season in Philly. With a vast number of talented youngsters in the minors just a season or two away from cracking the big leagues, this very well could be the last shot for Howard to prove that he can still perform at a high level. Although he hit 23 homers last season, he has failed to hit 30 or more since back in 2011. The Phillies aren’t predicted to do much this coming season, but hopefully Ryan Howard will emerge as the bright spot.

In Pablo Sandoval’s six full seasons with the Giants, he was one of the top slugging third basemen in baseball. For that reason, the Red Sox locked him up on a 5-year, 95 million dollar contract beginning last season, but he failed to live up to expectations. In 2015, Sandoval recorded a career low in batting average, RBI’s and home runs, leaving many looking for him to take things up a notch this season. But after reporting to Spring Training in subpar shape, your guess is as good mine for how Sandoval will fare in 2016. Perhaps 2015 was a mere fluke and Sandoval will return to his former All-Star self. Only time will truly tell if he can make the last four years of his contract worth the Red Sox while. But with the Red Sox looking to make another playoff push in 2016, Sandoval needs to be a big part of their team.

A quick glimpse at Yoenis Cespedes’s stats from 2015 would undoubtedly leave you wondering how I could place him on a list of players who need a good season this coming year. Hitting .291 with 35 home runs and 105 RBI’s last year, there’s absolutely nothing more that could be asked of Cespedes; especially from the Mets, who acquired Cespedes for the second half and proceeded to make a run to the World Series. Even so, he needs a really good year equal to his most recent one for the Mets to hold off the Nationals, who, despite losing some key pieces, will still likely be very competitive this year. Without Cespedes and his superstar numbers, the Mets still hold a good chance at another playoff run. But with him performing well, it’s all but a guarantee in the minds of many.

As with Yoenis Cespedes, Shelby Miller had a career year in 2015, but still managed to make his way onto my list. After a few under the radar seasons with the Cardinals, Miller proceeded to breakout as one of the best young starters in all of baseball last season. Posting a 3.02 ERA over 33 starts, Miller found himself as a very valuable asset — so much so that he was traded for 2015 number one overall draft pick Dansby Swanson during the offseason. Joining fellow newcomer, Zack Greinke, in the Diamondbacks’ rotation, there are a lot of expectations out of the D-backs in 2016. Thus, Miller needs to post numbers similar to — if not better than — the ones he recorded last year. If he can do that alongside Greinke, the D-backs could be in for a major turnaround in Phoenix.

The past three seasons have been fairly rough for CC Sabathia. Posting the best ERA of those seasons this past year of 4.73 is enough to prove just how bad things have been (not even including his off-the-field battles). However, there is seemingly hope for Sabathia in 2016, with many people even going as far as to envision him becoming the comeback player of the year. That doesn’t mean there isn’t a lot of uncertainty moving forward for Sabathia, though. At 35 years old, and with his best numbers likely in the past, Sabathia is in need of a good season to get his career back on track. The Yankees actually have a fairly good team heading into this season, but it is going to take a team effort, including solid numbers from Sabathia, for them to get any sort of postseason run together.

Going from former first round draft pick and top five prospect in all of baseball to an injury-plagued player who has yet to live up fully to the type of numbers many predicted he would post, Wil Myers needs a fully healthy 2016 to show what he’s truly capable of. Myers showed a glimpse at his potential back when he first came up in 2013 with the Rays, going on to win the Rookie of the Year award, and theoretically has 30+ homer power, if he can only find a way to tap into it. This season with the Padres, Myers is making the switch to first base full time, so hopefully some stability will allow him to get into the zone for the length of the season. Having yet to play even 100 games in a single season over his career, Myers could finally break through if he can simply play the majority of games this coming year.

Possessing all the talent in the world, this is a make-or-break season for Matt Moore in my mind. Although he has shown flashes of greatness over his career, Moore suffered an arm injury that lead to him having to undergo Tommy John surgery in 2014. Following his return this past season, Moore was a bit shaky, posting a 5.43 ERA on the year and spending a good bit of time down in the minor leagues in an attempt to re-establish his dominance. The Rays need him to return to form in order for Tampa to compete in the strong American League East division. Although not everyone sees the Rays doing much of anything in 2016, there are some who are predicting big things. For me, it all comes down to their starting pitching, with Moore being a big key to that success.