Joe Kelly was drafted by the Cardinals in the 3rd round of the 2009 draft, despite recording a 5.65 ERA his final year at the University of California-Riverside. 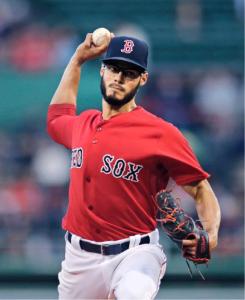 Following the draft, Kelly performed well in the minors and made a steady progression through the ranks from 2009 to 2012, earning a mid season call up in 2012 to the Cardinals, where he proceeded to post a 3.53 ERA over the course of 107 innings pitched.

Kelly had a terrific following year in 2013 with the Cardinals, recording a 2.69 ERA over 124 innings and looked to be on his way to becoming one of the Cardinals’ top pitching options in their rotation. But after a 4.37 ERA seven game start to the 2014 season, Kelly was traded to the Red Sox where he has remained ever since.

The 2015 season saw Kelly take the mound for the Red Sox 25 times, but his outings varied in consistency and his overall results were subpar. Following the up and down year, Kelly was shut down for the final portion of last season due to shoulder soreness, after a cumulative 4.82 ERA.

Despite the poor year for Kelly in 2015 and subsequent talks that he may be moved to the bullpen full time, many people still feel that he can turn things around to become an effective major league starting pitcher once again. After all, he still owns a decent career ERA of 3.82, and there have been plenty of signs in the past that he has the potential to still pan out.

Joe Kelly — pitcher for the Boston Red Sox — took the time recently to answer some of my questions:

I became most interested when I was about 5 years old. Growing up, my biggest influences were my parents. They were always so supportive and loving.

My favorite baseball player was Ken Griffey Jr. He was the best player in the league. Everyone loves a winner.

3.) You were drafted by the Cardinals in the 3rd round of the 2009 draft. What was that process like for you? Where were you when you first found out? Initial thoughts?

It was an awesome feeling. I was with my family and closest friends at a local pizza parlor. It was also my 21st birthday, and we had a great time celebrating all night.

4.) You made it to the World Series in 2013 with the Cardinals, and started game three. What was that overall experience like for you?

Being in the World Series is a great experience that I will never forget. I can’t wait to hopefully make it back and get a ring.

5.) For the Cardinals, you pitched in around 70 games before being traded to the Red Sox midseason in 2014. What were the biggest differences you noticed about switching to pitching in the American League? How difficult was it to make the transition during the season?

The biggest difference is that you don’t get to face the pitcher hitting. You actually have to focus on the number nine hitter and work for your out. It was hard in the middle of the season, because it was such short notice. I had to live in the hotel for two months in Boston.

6.) Throughout your career in the minors and majors, you’ve made the switch back and forth between the bullpen and starting rotation numerous times. How do you enable yourself to thrive in whatever role you are placed in?

I just try to keep pitching simple, whether it’s in the pen or being a starter.

7.) The Red Sox made the major additions of David Price and Craig Kimbrel this past offseason to bolster your rotation and bullpen. How do you feel their presence will impact the overall makeup of the Red Sox in 2016?

I think we have a really good team, and should compete for the top spot in the AL East. Adding those two guys is huge. They are great teammates and leaders. I can’t wait to play with them.

8.) After a somewhat poor start to 2015, you won eight consecutive starts from August through September before being shut down due to shoulder soreness. What do you feel you were doing differently that allowed you so much success?

I just started to locate my fastball with more consistency and mixed my off speed pitches well. I hope that I will pick up right where I left off at last season.

Favorite show is ‘Breaking Bad’, and favorite food is ‘In-N-Out’.

Big thanks to Joe Kelly for taking the time to answer my questions.