A quick glance at the box score of Tuesday night’s Tigers game versus the Marlins wouldn’t necessarily leave you to believe it, but Justin Verlander was terrific on the evening. Yes, he gave up three earned runs; and no, he didn’t strike out a ton, or receive the win for that matter. But he showed flashes of the old Verlander that the baseball world has come to miss. 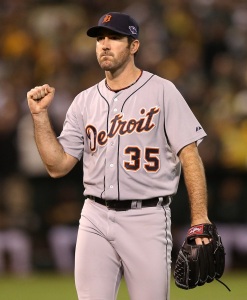 Following a 67 start stretch over the course of 2011 and 2012, in which Verlander went 41-13 with a combined 2.52 ERA, winning a Cy Young and MVP award, he has recorded a 3.84 ERA ever since. Heading into this season, you truly didn’t know what to expect from the six-time All-Star, but he hit the ground running right out of the gate in game one of the year for his 2016 campaign.

Verlander carried a no-hitter all the way into the sixth inning on Tuesday night. But, unfortunately, that’s when things began to fall apart. After surrendering hit number one, in the form of a double to Dee Gordon, Verlander proceeded to give up an RBI-single to Marcell Ozuna and a two-run homer to Giancarlo Stanton, which brought the score up to 5-3, Tigers. However, despite the poor inning, it was just that — one inning. Verlander had already proven in the previous five that he still has a ton of talent remaining.

It’s been quite some time since Justin Verlander performed anywhere near the caliber of pitcher he was just a few seasons ago. However, if his first start of the year is any indication, the old Verlander could be on the verge of breaking out once again. For the Tigers’ sake, they better hope so. Detroit’s lineup is more than good enough to produce a very special season, but their starting rotation has a few question mark; the biggest of which being Verlander heading into this season.

Even so, if Justin Verlander can continue to build upon his outing on Tuesday night, the Tigers could end up surprising quite a few people around the baseball world when all is said and done.