If you’ve been following this blog for any extended period of time, or if you’ve simply taken the time to peruse through the hundreds of posts I’ve written, you know that one of the many things I enjoy doing during any given baseball season is going out to the ballpark and getting autographs from some of baseball’s up-and-coming top talent.

This season, I’m planning to be much more selective than I have been in the past with which games I go to (due to a number of factors), but I still plan on making it out to my fair share of games in 2016. 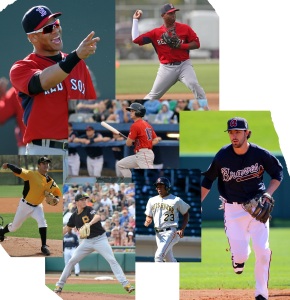 Tuesday kicks off my baseball season, as I’m heading out to watch the Mudcats take on the Salem Red Sox. The top three prospects of the Red Sox farm system — Yoan Moncada, Rafael Devers and Andrew Benintendi — are all apart of the current Salem team, so I’m really looking forward to attending this game.

On the other side of things, the Mudcats have their top prospect, Dansby Swanson, as well as 2014 first round draft pick, Braxton Davidson. With so much talent, I’ll either leave the game very elated — having gotten an autograph from most if not all of them — or very disappointed.

But while that game features four of the top 25 prospects in all of baseball, making it one of the best minor league games I’ve ever been to (talent-wise) in my life, the next game on the docket for me isn’t far behind.

On the following Sunday, April 24th, I’m planning on heading out to Durham to see them take on the visiting Indianapolis Indians — the Pirate’s Triple-A affiliate. I’d been looking forward to seeing this team since last season, when I projected so many good players to be apart of their roster. Three of their top four prospects makeup this team, in Tyler Glasnow, Josh Bell and Jameson Taillon, in addition to Alen Hanson, their number ten prospect. Thus, it should turn out to be a great game.

All in all, this coming week, I’m planning to see eight of the top 53 prospects in person (including Blake Snell for the Bulls). With this season so uncertain as to how often I’ll be out at the ballpark, it’s nice to get off to such a great start to the year. No matter how the season winds up panning out for me autograph-wise over the next five months, I’m still planning to blog about it all (as I have in the past) after I’ve attended my last game sometime in September.