Nothing is guaranteed in baseball. From one season to the next, you never know which teams will go from last to first or first to last, or which players will have a bounce back year or a season far disastrous from the one they posted just a year prior. 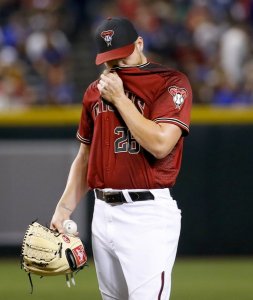 Shelby Miller is a prime example of that.

Last season with the Braves, Miller made himself known as a true star pitcher in baseball, giving Atlanta 205.1 strong innings, totaling up to a 3.02 ERA on the season. For his efforts, Miller received a ton of recognition — so much so that he was the key piece of a huge trade this past offseason.

Sending their top prospect (and first overall draft pick in 2015) Dansby Swanson, along with two other pieces, to the Braves, the Diamondbacks received back Shelby Miller to join Zack Greinke in what looked to be a strong pitching staff; one predicted to be more than capable of competing for the National League West title.

However, things have gone far from perfect in Arizona.

With Greinke being injured at times this season, Paul Goldschmidt not getting off to a hot start, and with 2015 breakout star, A.J. Pollock, being lost for the year in Spring Training, not a lot has gone right to help the D-backs perform the way they had been expected to.

But while it’s not completely Miller’s fault (it’s never fair to point the finger at any one player as the sole reason for a team’s losing season), he certainly has played a big part in their demise.

Going 2-9 with a 7.14 ERA over 14 starts this season, Miller was sent down to Triple-A on Thursday, with the hopes of getting him back on track in the minors. But even if he gets it going again down in Reno, things are too far gone for the Diamondbacks to regain momentum and make something special out of this season.

Sitting in last place in their division, 19 games back of the first-place Giants, the Diamondbacks haven’t had much to be excited about this season. While Miller was supposed to give the D-backs a great shot at a memorable year, he hasn’t been anywhere close to the pitcher he was last season with the Braves. But you truly never can tell how any given trade will pan out.

Even so, with the trade deadline slowly approaching in two weeks, it will be interesting to see which teams will take a gamble and make a trade for a star player. It may pay off, giving them what they need to make it to the postseason. Or it could turn out to make little to no difference, as the Shelby Miller trade has for Arizona.

3 thoughts on “Shelby Miller: A Tale of Two Seasons”