It took him a bit longer than expected, sitting on 2,998 hits for seven straight games, but Ichiro Suzuki finally tallied his 2,999 hit on Saturday and promptly recorded knock number 3,000 on Sunday, making him the 30th player all-time to reach the incredible mark. 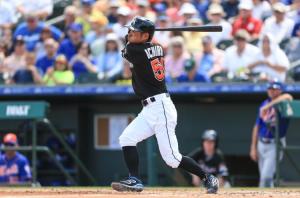 With the hit, Ichiro has all but locks himself in as a first-ballot Hall of Famer. Although Ichiro’s batting average for this season has taken a bit of a dive recently, due to his several hitless games in a row, he’s still batting .317 on the season and holds a .314 lifetime average.

It’s that type of consistency that has ultimately given Ichiro so much success over his career. Spending most of his “prime” years over in Japan before coming to the United States in 2001, Ichiro absolutely burst onto the scene, hitting .350 with 56 stolen bases his rookie year. That would turn out to be just the beginning of what would turn into ten straight 200-hit seasons and subsequently 3,000 hits.

Whether Ichiro retires in the next year or two, or decides to play until age fifty is yet to be seen. But one thing is for sure. As long as Ichiro continues to don a uniform, he’ll continue to do what he does best: Get hits — lots of them.