Each year there are usually several pitchers from each league who have incredible seasons, making it difficult to choose between them for who most deserves the Cy Young award. This year is no different. The American League saw Rick Porcello, Zach Britton, Corey Kluber, Masahiro Tanaka, Aaron Sanchez and Justin Verlander all having great seasons. 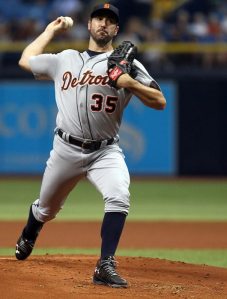 However, in the end, only one player can take home the Cy Young award.

Although Rick Porcello had a great season that helped carry the Red Sox into the postseason, I don’t feel he’s one of the top few candidates for the Cy Young award. His 3.15 ERA on the year is really good, and his 22 wins — given, wins aren’t as big of a deal as they used to be — stand out, but Porcello didn’t quite do enough all around to earn my vote.

Holding the same fate, Masahiro Tanaka also had a fantastic year, posting a 3.07 ERA over the course of nearly 200 innings pitched for the Yankees. However, his all around stats don’t really hold up when compared to the others in the running. Even so, Tanaka looks to be the ace of the staff moving forward.

Aaron Sanchez’s season was also something special, recording an American League best 3.00 ERA, and virtually taking the Blue Jays to the postseason. With that said, he still didn’t do enough to win the award, as he made a handful of starts fewer than the frontrunners, leading to his strikeouts being lower.

Finishing third on my list is Corey Kluber, who had an amazing year despite it not being on the level we have seen before from Kluber in the year he won the Cy Young. Kluber struck out 227 batters over 215 innings pitched, and held opponents to a .216 average on the year, but likely won’t win the award when all is said and done.

Happening only a handful of times in baseball history, I’m not completely against a reliever winning the Cy Young award, but they have to have posted an unbelievably historic year. Zach Britton certainly fits that category, recording a 0.54 ERA on the season while notching 47 saves, but I don’t see him as more worthy than a certain Tigers’ ace.