As I stated in my American League Cy Young post, each season there are usually several pitchers from each league who have incredible seasons, making it difficult to choose between them for who most deserves the Cy Young award. This year was no different. Max Scherzer, Jose Fernandez, Tanner Roark, Johnny Cueto, Madison Bumgarner, 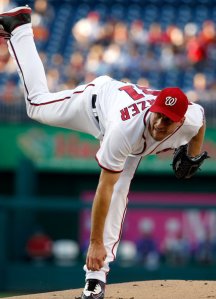 Noah Syndergaard, Jon Lester and Kyle Hendricks all had years worthy of recognition, but in the end only one can with the National League Cy Young award.

Admittedly, there are a few others with unbelievable stats from 2016 in the National League not included on my list, but I decided to begin the discussion with Tanner Roark, who is one of the eight pitchers in the NL with an ERA below 3.00. Roark’s 2.83 ERA over the course of this season is quite remarkable, but with so much competition, it quickly leaves him on the outside looking in.

Another pitcher in Roark’s position is Johnny Cueto, who had an unbelievable year but still didn’t do enough to earn the Cy Young. Even so, Cueto’s 18-5 record with a 2.79 ERA helped get the Giants into the postseason once again, despite some offensive struggles, and he will be a big part in their success moving forward.

Jose Fernandez is the next pitcher I’m taking off the list, which is truly unfortunate. With the stunning news of his untimely death coming back in September, it would be fantastic to see him win the award. However, while I’m all for honoring his memory, there are other candidates who deserve the award more when you take a close look at the stats.

Despite getting the Mets into the postseason for the second straight season, Noah Syndergaard won’t wind up with the Cy Young award when all is said and done. But his 2.60 ERA and 218 strikeouts certainly stand out on a pitching staff that saw a plethora of injuries, and Syndergaard will likely continue to be the ace of Queens.

Three-thousand miles away, out in San Francisco, Madison Bumgarner had yet another great season of what has become a great career to this point. Bumgarner managed to strike out 251 batters over the span of 34 starts this season, and combined with Johnny Cueto to make on of the best one-two punches in all of baseball, but won’t take home the award when the voting is revealed.

Speaking of one-two punches, John Lester made up one half of perhaps the best duo in all of baseball for the Cubs. His 2.44 ERA was second best in all of baseball, and his .211 opponent batting average definitely jumps out, but so does Lester’s less than one strikeout-per-inning, making him fall short of the Cy Young award.

It came down to a couple of aces this season. But while Kyle Hendricks and his MLB-best 2.13 ERA initially makes him the heavy favorite, I couldn’t select him to pick up the award. His strikeout numbers are subpar at best, and while that isn’t always a deciding factor in the voting process, it is in this case.

For that reason, I went with Max Scherzer to win the National League Cy Young. He has the worst ERA of all the players on my list, at a dismal 2.96, but it’s his strikeout numbers that give him the edge in my mind. The Cy Young award is about utter dominance, and Scherzer’s 284 K’s (including a 20-strikeout performance this season) makes him the number one choice. Striking out 114 more batters than my runner up Kyle Hendricks, I made the tough but correct decision for the award this season.