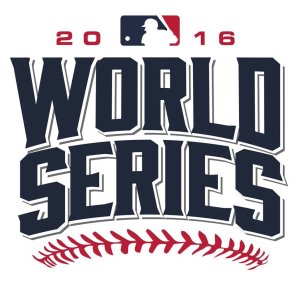 teams in which it’s a true toss-up as to which team will come out on top. This season has that playing out once again.

Although the Cubs are a better team on paper, the Indians have repeatedly proven people wrong all season long, making it truly impossible to predict the winner when all is said and done.

But there’s an added element to the 2016 Fall Classic that makes this one far more exciting and interesting, and it’s the fact that the Cubs and Indians — the two teams in the World Series — haven’t won a World Title in a combined 176 years (the last titles coming in 1948 for the Indians and 1908 for the Cubs). To say the fans of these squads have been waiting for the feeling of having won it all for quite some time would be a vast understatement.

The first game in a race to four wins and an end to a generational drought for both teams began on Tuesday night in Cleveland, with Corey Kluber and his 0.98 postseason ERA going up against Jon Lester and his October mark of an 0.86 ERA. For many, a pitchers dual was all but guaranteed to happen, but it quickly became evident that things wouldn’t turn out that way.

Kluber began the game strong, striking out two of the first three batters he retired and looked like the Kluber of old who has become known as one of the game’s best pitchers, despite some rust at times this season. However, on the

other side, Lester was a bit shaky out of the gate, allowing a hit to Francisco Lindor (his first of what would be three on the night) as well as a subsequent stolen base in the very first inning — a steal which earned everyone in America a free taco from Taco Bell on November 2nd.

Lester proceeded to walk the next two batters and load the bases for Jose Ramirez, who would hit a weak tapper that was unable to be fielded, allowing the first run of the series to score. Soon after, Lester hurt his cause even further, hitting Brandon Guyer to force in a run and make the score 2-0.

Although Lester was able to work out of further trouble, thanks to David Ross making a great play behind home plate, the Cubs didn’t do anything to capitalize on it. To make matters worse for the Cubs, Kluber was absolutely on top of his game, striking out eight batters through the first three innings, setting the all-time record in the 1,503-game history of the postseason for the most batters struck out by a pitcher in the first three innings.

The Indians would rally once again in the next inning, as Roberto Perez launched a line-drive homer to give the Indians a 3-0 lead. Having previously won 60 straight games when leading by three or more runs, things were getting late early for the Cubs.

One of the first bright spots for the Cubs came in the seventh inning, when Corey Kluber was removed from the game after allowing a hit to the first batter of the inning. Normally his replacement Andrew Miller would strike fear into the hearts of the opposing team, but things didn’t begin that way upon his arrival. The bases quickly became loaded against Miller with no outs, giving the Cubs their best scoring opportunity of the night. But once again they failed to record a run-scoring hit, letting Miller off the hook without a single runner crossing the plate.

The Cubs would continue to give things a valiant effort into the late-innings, but in going 1-11 with runners in scoring position, they simply couldn’t get the job done. The death-blow came in the eighth inning, when Roberto Perez blasted his second home run, giving the Indians a 6-0 lead, and making Perez just the third player in Indians postseason history to hit multiple homers in a single game, joining him with Jim Thome and Manny Ramirez.

That 6-0 lead would turn out to be the final score, and marked the first game one shutout in a World Series since the A’s failed to tally a run in the 1990 series.

With such a commanding win by the Indians, you began to wonder whether or not the Cubs simply weren’t able to do much of anything against a masterful pitching performance or if their bats were once again falling cold, as they had earlier in the postseason. After all, this is the time of year when every single out counts, and low production absolutely can’t be afforded.

Citing that the team to win game one has won 12 of the last 13 World Series, the Cubs needed to make a statement in game two to get the momentum back on their side, and you had to figure they would come out trying to make something happen very early the next night.

Heading into game two, which had its start time moved up an hour due to the threat of rain, Trevor Bauer was set to face off against Jake Arrieta, both of whom had been back and forth all season long in terms of their quality of pitching. You didn’t really know what you were going to get out of them on Wednesday night, but you got the feeling each would be on top of their game. 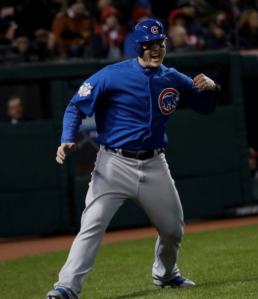 As it would turn out, however, it wasn’t Bauer’s night at all, as the Cubs got off to the aforementioned hot start they needed, scoring a run via an Anthony Rizzo RBI-double in the first inning.

The Cubs would score again in the third off a couple of singles that advanced Rizzo all the way home, giving the Cubs an early 2-0 lead. Due to the runs allowed, Bauer wouldn’t last even four innings, getting pulled in the third for a reliever — vastly different than Kluber’s outing some 24 hours prior.

However, the switch didn’t cool down the bats of the Cubs by any means. If anything, it energized them even further, as they proceeded to score three more runs in the fifth inning, off of a Ben Zobrist RBI-triple (helped in large part to Lonnie Chisenhall falling down while in pursuit of the ball), yet another RBI from Kyle Schwarber and a bases-loaded-walk of Addison Russell that forced in a run.

Up 5-0 with still half the game to play, things were virtually flipped from the game before in terms of the team who had control of the game.

Equally swapped was the teams’ pitching dominance, as following the Indians’ Corey Kluber dominating in game one, the Cubs’ Jake Arrieta was even better, failing to allow a hit through 5.1 innings pitched, setting the longest such streak in World Series play since back in 1969. 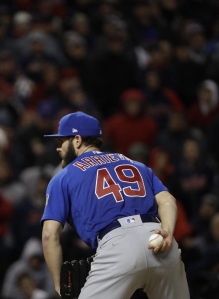 The double that broke up the no-hitter was notched by Jason Kipnis who proceeded to advance down to third before a wild pitch by Arrieta allowed him to jog home for Cleveland’s first run of the game.

Mike Montgomery would come on in relief to settle things down, and he was absolutely terrific, giving the Cubs two strong innings, before being replaced by the flame-throwing Aroldis Chapman. As per usual, Chapman slammed the door on the Indians, hitting 104 on the gun and evening up the series at a game apiece.

The World Series now heads to Wrigley Field where the next three games will be played. Although a three-game sweep would win either of the teams the World Series, such an occurrence isn’t all that likely. Given, this is the postseason, and anything can and usually does happen. But from the back and forth dominance we’ve seen to this point, this series has all the makings of a six or seven game affair.