Another year has nearly come and gone, and so goes the previous twelve months of blogging. After nearly giving up my baseball blog at the end of last year, I decided to continue it into this year, but am leaning towards making early 2017 as the expiration date for my blog. 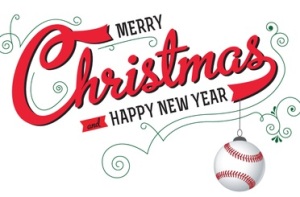 No matter what I decide, though, this will definitely be my final blog post until next year arrives in 9 days. With Christmas time upon us, I don’t want to have to worry about hoping on here to post a blog entry every fifth day, and therefore will be holding off until the new year.

Regardless, after that will come my unofficial Hall of Fame vote, with the official election results being written about in a post when things are announced on January 18th. It should be interesting to see who gets inducted with such a strong class this year.

January 20th will mark the sixth year of my blog, and that’s the make-or-break point for the entire year. I’ll either decided to make that my final post ever or I will continue on for as long as I can. It has yet to be determined.

Should I decide to keep going, I’ll likely post another entry towards the end of the month regarding the release of the 2017 Top 100 Prospects list by MLB.com. I always find it interesting to talk about and review, and will be sure to write about it if I’m still going.

But no matter what I decide to do beyond January 20th, the first three weeks will be fairly straightforward blogging, assuming no big baseball news takes place.

Until then, Merry Christmas, and best wishes for a Happy New Year.