My dad and I arrived at Five County Stadium, home of the Carolina Mudcats, at around 6:30. The gates had been open for 15 minutes, and there were already several dozen cars in the parking lot.

I was worried that batting practice was already going on, and that I had missed a chance at a baseball or two. But I didn’t hear any cracks of the bat. What? I walked inside the stadium only to find that there was indeed NO batting practice going on. I was upset that there was no BP, but at the same time happy to find out that my ears hadn’t failed me.

I could of tried to get a player to throw me a baseball, but there are large nets that go all the way from foul pole to foul pole. So instead, I wandered around with my dad.

Before we took our seats we stopped by a concession stand where my dad bought a BBQ sandwich and drink. NINE DOLLARS! (Is anything cheap any more? I mean with gas soon to be like 20 dollars a gallon, who can afford this kind of stuff?)

I almost forgot to mention that tonights promotion at Five County Stadium was “Thirsty Thursday”. AKA, 12 oz. soda and beers were just a dollar. (Finally affordability!!) Guess what I got to drink on this fine Thirsty Thursday….. (Really……go ahead…….guess.)

If you said (A), sorry……you’re incorrect.

That leaves us with (C). (The correct answer.)

That’s right. After complaining about everything being SO expensive, I passed up on a dollar soda. Sue me!

After a 15 minute walk around the stadium we finally took our seats in the FRONT row. (Section 106-Row A-Seats 4 and 5, to be exact.) After the national anthem (which included a few bombs bursting in mid air–AKA fireworks) it was finally my favorite time of any ballgame. GAME TIME!!!

The Smokies half of the first wasn’t much to write home about. As they went down 1, 2, 3. The Mudcats however scored 2 runs on 3 hits. (Two of which were doubles.)

The Smokies finally got on the board in the top of the third inning by scoring 2 runs. The mudcats didn’t answer in the bottom half, but scored a run in the fourth, fifth and sixth innings.

The Smokies then made things interesting by getting within 2 runs in the seventh. The score was 5-3, with the Mudcats on top, going into the eighth inning.

And that is were things stayed. As the final score was 5-3. THE MUDCATS WON!!

I tried for a baseball from the bat boy after the game, but failed in doing so. (No baseballs for me.) But hey…..I got a souvenier cup. (Cue a sarcastic, “OH BOY!”)

So, I promised photos in my last entry, and here they are…….

(Sorry about the netting.)

Remember in my last entry when I said that a lot of past and present MLB players have come from the Carolina Mudcats? (Tim Wakefield, Miguel Cabrera, etc.) Well anyway, here’s an example: 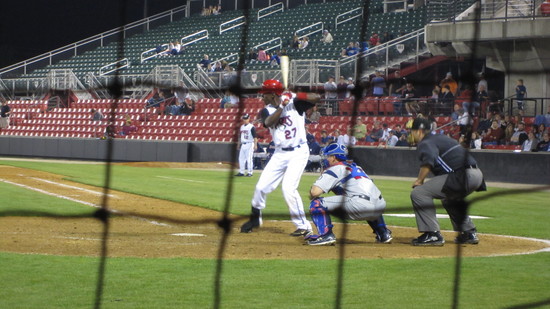 Who’s that you ask. That’s Fred Lewis. A player for the Cincinnati Reds, who is down in the minors for rehab. (I think.) Did you notice his red batting helmet? Everyone else on the team had a black helmet, but he had a Cincinnati Reds batting helmet with the number 15 on it. See Fred Lewis in the majors below: 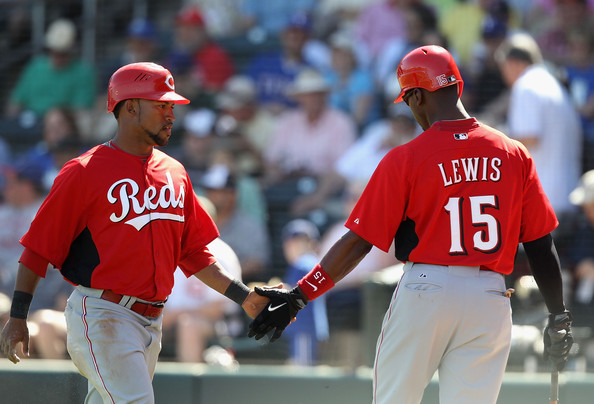 Here’s a better perspective of the view from our seats: 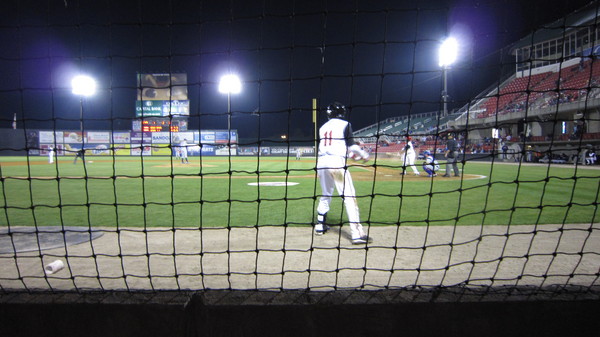 I’m going to let you guess what the next picture is: 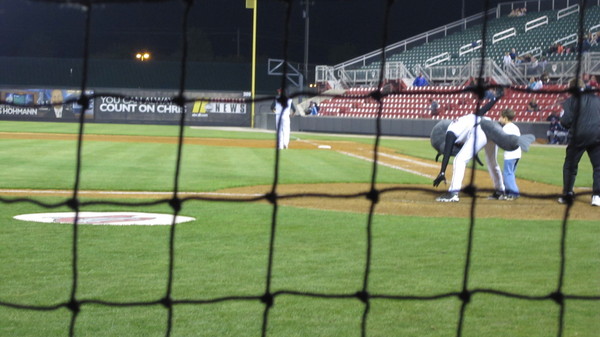 Give up? It’s the Carolina Mudcats mascot, a mudcat. (How original.) Muddy the Mudcat to be exact. In the photo above he’s about to race the kid around the bases. Guess who won. Yep. The kid. (I personaly think the whole race was rigged.)

That wasn’t the only action that took place inbetween innings. There was a T-shirt toss. (No I didn’t get a shirt.) A sack race. And of course the Seventh inning stretch. (That’s always a crowd favorite.) Now for more pics.

Five County Stadium has many unique design features to it. Here are two of them: 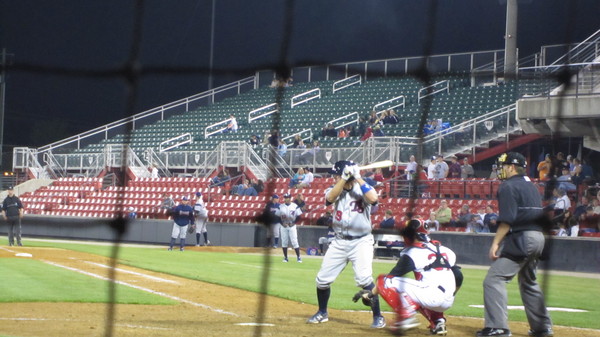 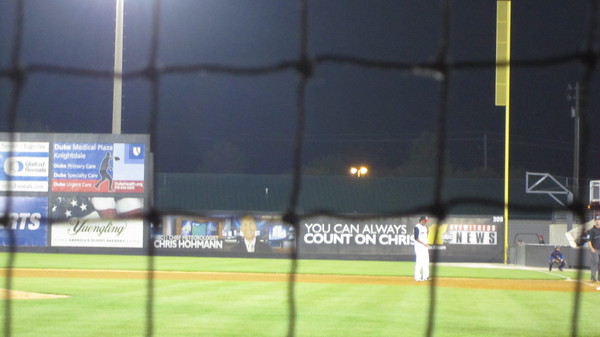 The first picture is of the General Admission seats. (Notice that they’re green.) The second picture is of the right field wall. It is dramatically short, and very close. This makes it VERY easy for a lefty to hit a homer. Oddly enough, no lefty even came close. Hmmm.

I guess that’s for the people who want to eat in warmth (yes it was freezing cold) and enjoy a ballgame at the same time.

The most action packed thing that happened all night was in the bottom of the seventh inning. After striking out, Mudcats right fielder, Denis Phipps, was ejected from the game for throwing his bat to the ground in fustration. I think the home plate umpire jumped the gun. I mean, give the guy a warning. Don’t just give him a “YOU’RE OUTTA HERE!” (That umpire had problems all night with making good decisions on calls. And the crowd let him know it. It was quite hilarious actually.)

Here’s Denis after the ejection was made: 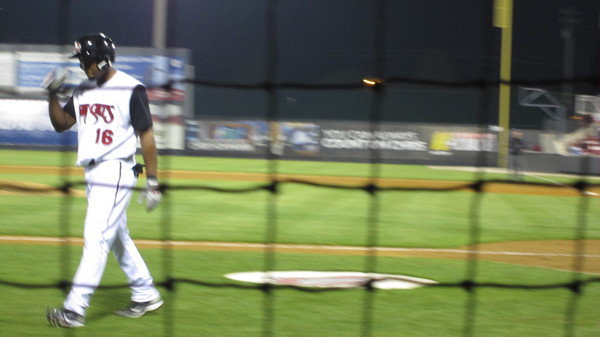 And here’s the “necessary” discussion between the home plate ump. and a Mudcats coach over the call: 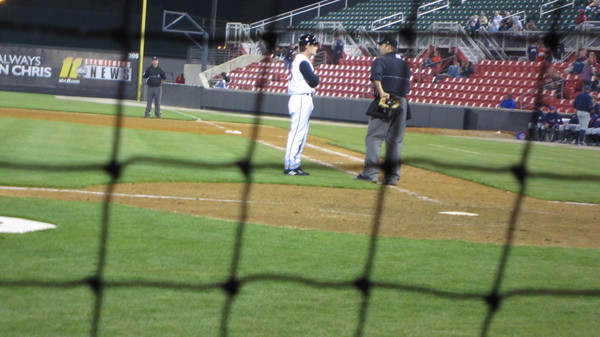 All in all it was a GREAT game. And I had a GREAT time. This was my first Mudcats game in over 5 years. It was good to be back. I might have to go back very soon. Hmmmm……