Around a month ago, I blogged about the through the mail (TTM) autograph requests I was planning to send off to players during Spring Training. At the end of the post, I stated that I was going to be publishing a blog post every time I received back a few autographs, and now that I’ve successfully gotten back some of the requests I sent, I figured I’d go ahead and type this entry up. Of the fourteen total TTM requests I sent off, I’ve received four of them back, with them being from: 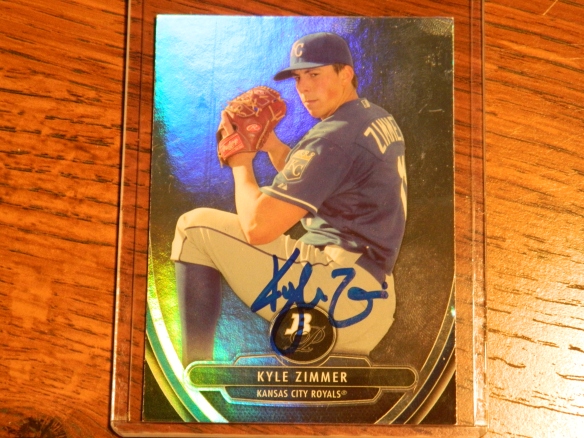 Kyle Zimmer is the number 25 overall prospect in all of baseball. Although he didn’t have a fantastic 2013 season, going 6-9 with a 4.32 ERA, Zimmer has a ton of upside moving forward, and has many people excited for Kansas City’s future. With a fantastic fastball, in addition to an arsenal of a curveball, slider and changeup, Zimmer could, potentially, see his first big league time at some point towards the end of this season.

Albert Almora is the number 18 overall prospect in all of baseball. Though he played in just 61 games last season, Almora is one of the Cubs’ highly coveted core prospects — consisting of Kris Bryan, Javier Baez, Jorge Soler, etc. — that are making their way to Wrigley Field. Almora is still several years away from the major leagues, but by batting .329 last year, hopes are high that he will develop into the talented outfielder that he has the ability to become. 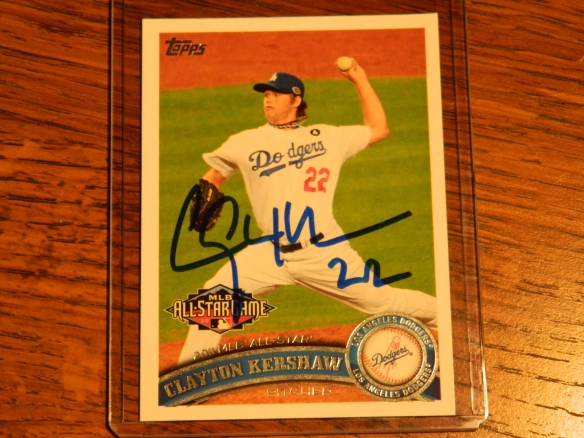 This one doesn’t need too much explaining. Clayton Kershaw has become one of the biggest superstars over the course of the past few seasons, winning two Cy Young awards in that time frame. Going 16-9 with a 1.83 ERA in 2013, Kershaw should continue to be, arguably, the most dominant pitcher in all of Major League Baseball. He’s set to get his first start of the season on March 22nd, in game one of the Opening Series against the Diamondbacks down in Australia.

Eddie Butler is the number 41 overall prospect in all of baseball. Pitching in the 2013 MLB futures game up in New York City, in July, Butler went a combined 9-5 with a 1.80 ERA last season, really putting himself on the map around the league. He held opponents’ batting average to a mere .180 for the entire season, and combined with other top Rockies pitching prospect, Jonathan Gray, the Rockies have a fairly good pair of young arms coming their way in the next couple of years.

I still have autograph requests out for Archie Bradley, Taijuan Walker, David Robertson, Mark Appel, Cody Asche, Kris Bryant, Kolten Wong, Mike Napoli, Jake Marisnick and James Paxton. When/if I get any of those back, assuming it’s before Opening Day on March 31st, I’ll be sure to post another update. Though, there’s no guarantee I’ll get any more back at all.

After receiving his highly anticipated call-up to the Majors on September 2nd, Billy Hamilton finally got a chance to show off every aspect of his game on Wednesday, against the Astros, as he was placed into the lineup for the first big league start of his career.

And he wouldn’t disappoint.

Going 3-4 on the night, Hamilton would also go 4-4 in stolen base attempts — one on a pitchout — becoming the first player to have four stolen bases in their first career start since the live ball era began in 1920.

The last Reds player to record four steals in a game was Felipe Lopez, back in 2006. Though, I have a feeling this isn’t the last time you’ll see Hamilton tally a four bag night. There’s much more to come from Hamilton in the future.

But Hamilton is focused on the present, saying, “My job is to steal bases, no matter how many I get. That’s an accomplishment to get four in one game. Who knows what comes next?”

The four stolen bases Hamilton recorded on Wednesday night make a total of nine for his big league career, in just eight games — fastest to that mark since 1900. The crazy part being that he’s yet to be caught.

Showing the kind of incredible speed he possesses — stealing a total of 155 bases in 2012 — some argue Hamilton is the fastest player the game has seen since Rickey Henderson.

It’s hard to argue with that — proving his speed over and over again.

But more importantly, Billy Hamilton proved to the world on Wednesday that he can perform at the Major League level, and perform incredibly well. If his career to this point is any indication, Hamilton is going to be an extremely special player for the Reds for a very long time.