The Yankees officially fell out of playoff contention on Wednesday, making it just the first time since the 1992-1993 seasons that they have missed the playoffs in back-to-back years. But at Yankee Stadium on Thursday night, no one cared. There was a far more important reason that 48,613 fans (the most at any game this season) spent thousands upon thousands of dollars to jam pack the ballpark.

The reason was Derek Jeter.

Playing in his first home game in which the Yankees were eliminated from the playoffs, Jeter went into this game knowing it would be his final 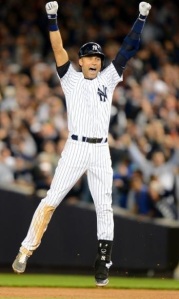 game in New York of his career.

Even with that on his mind, the .313 career hitter at Yankee stadium was still able to block out his emotions for the most part (something he’s been able to do extremely well over his career) and focus on the one thing he’s been concerned about for years — winning.

But things didn’t start off as planned, as the first two batters of the game went deep to give the Orioles a quick two-run lead. Taking the fans from an electric crowd to a somewhat stunned crowd, you still figured this was far from where things would end. Not in Jeter’s final game in the Bronx.

As has happened from stadium to stadium throughout this season, due to his preseason announcement that 2014 would be his final year, Jeter received a standing ovation when he made his way to the plate for his first at-bat of the night. The fans knew this would be one of their final opportunities to thank Jeter for the memories, and they took full advantage of it. But the memory making wasn’t done. Not by a long shot.

After working the count a bit, Jeter drove a 3-1 fastball from Kevin Gausman deep to left center, and although everyone immediately thought it was a home run, the ball hit off the wall, allowing Jeter to coast into second with an RBI double — the 544th double, 3,462nd hit and 1,308th RBI of his career. You got the feeling that this was going to be a magical night.

However, the second and third at-bats of the night weren’t much to write home about for Jeter. A weak ground ball which resulted in a a fielder’s choice and a swinging strikeout, respectively, Jeter appeared to be headed for a memorable but fairly uneventful evening as the game rolled on.

But things would quickly change for The Captain.

Coming up with the bases loaded in a 2-2 ballgame for his fourth time at the plate, Jeter grounded to fellow short stop, J.J. Hardy, who made a wide throw to second base, allowing two runs to score on the throwing error. The score became 4-2, Yankees, with Jeter being responsible for two of the Yankees’ four runs. A sacrifice fly by Brian McCann then took the score up to 5-2, which is where things stood when the game moved into the ninth inning.

Before the game even began, many people speculated as to when Derek Jeter would be removed from the game. Many felt it would be with one or two outs in the top of the ninth, but the chance to replace him never occurred. Yankees’ closer, David Robertson, came on and gave up a two-run home run to Adam Jones, followed by a solo shot by Steve Pearce, and just like that the game was tied.

But no one seemed to panic as they normally would.

One look at the lineup card showed that Jeter was due up third in the bottom half.

After a single by Jose Pirela to lead off the bottom of the ninth (Pirela was promptly replaced by a pinch runner), Brett Gardner bunted the runner to second, bringing up Derek Jeter in a tie ballgame with one out.

Wasting no time, Jeter took the first pitch of the at-bat the opposite way into right field, bringing around the game winning run — the first walk off hit for Jeter since June of 2007. With everything having to go exactly right, there’s absolutely no better way the game could’ve ended for Derek 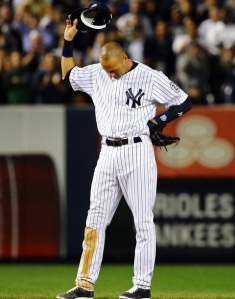 He’s a legend — simple as that.

Going down as one of the best short stops in history — right up there with Ozzie Smith, Cal Ripken Jr., etc. — Derek Jeter will be remembered forever.

And the fans let Jeter know it when he walked back onto the field after getting the game winning hit. Joined by fellow Yankees legends, Mariano Rivera, Joe Torre, Jorge Posada and Andy Pettitte, among others, Jeter took the time to thank the fans for their support, tipping his cap before taking off down the dugout steps and through the tunnel for the final time of his career.

Playing his entire twenty year career for the Yankees, the first ballot Hall of Famer didn’t have a whole lot to say after the game. As has been the case over his career, Jeter never says more than he wants to say. But he did let his emotions show through a bit, tearing up a bit at times. When asked what he would miss most, Jeter responded, “Everything. But most importantly, I’m going to miss the fans. They’re what made this special”.

The 1996 American League Rookie of the Year, fourteen time All-Star, five time World Series champion, and sixth place player on the all-time hit list accomplished nearly everything he ever dreamed of doing on a baseball field. Growing up, all Jeter ever dreamed of was being the short stop for the Yankees, and he was able to do just that. Dreams really do come true.

With that being his ultimate goal, Jeter made it official after the game that he will never again play short stop, saying he’s going to play in the final three games of the year up in Boston out of respect for the fans, but merely as the designated hitter.

As such, Jeter will undoubtedly get a standing ovation each and every time he steps to the plate up at Fenway park until his final at-bat occurs on Sunday. For a New York Yankee to get that type of respect from rival Red Sox fans, you know he had a truly remarkable career. As he always does, Derek Jeter put it best on Thursday night, simply stating, “I’ve lived the dream.”

It’s well known that the Yankees and Red Sox have been big-time rivals for years, but that didn’t stop the Red Sox from honoring the great Mariano Rivera before Sunday night’s game versus the Yankees.

Commemorating an incredible career, on the night that will likely go down as Rivera’s last game at Fenway Park, the Red Sox joined the list of teams that have given Rivera gifts throughout the season, in this his final year.

Nothing new, but the Red Sox’ ceremony might have been the most impressive of them all.

After a brief video was played, remembering October 17, 2004, when Rivera blew the game to the Red Sox — “less of a toast and more of a roast,” as Dave O’Brien put it — Rivera was given the following: A painting of himself, from David Ortiz; the number 42 sign that had been posted on the ‘green monster’ every time he made an appearance, from Dustin Pedroia, signed by the whole team; a blue 1934 Fenway Park seat with the number 42 on it, from Jon Lester; and the visiting bullpen’s pitching rubber, with an inscribed plaque, from Koji Uehara. 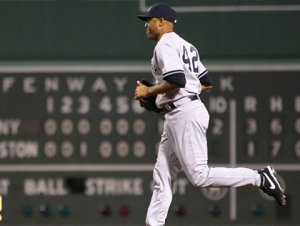 Perhaps none of these gifts were as great as the chair of broken dreams Rivera was given up in Minnesota earlier this season, but the Red Sox did one of the better jobs of paying tribute.

Rivera saw a lot of Fenway Park over the course of his Hall of fame career, pitching there in 60 games — more games than any visiting relief pitcher in the park’s history.

When you’re talking about a ballpark that’s over 100 years old, that alone makes you aware that Rivera is someone special. And therefore, with plans to retire after this season, it’s important to enjoy Rivera’s greatness in the little time that remains. Players of his caliber don’t come around too often.

However, stating that “hopefully it’s not the last time”, in response to playing at Fenway Park, Mariano continues to remain optimistic of the Yankees’ fate for the 2013 season. Though it’s going to take a lot for them to make the postseason, as the Red Sox swept them in their recent series, certainly not helping their cause any. But if there’s a team that can do it, I believe it’s the Yankees.

For Mariano Rivera’s sake, I hope they can.

One of those players that you never want to see retire, Rivera isn’t just the best closer the game has ever seen — the record holder for most saves, with 651 — he’s one of the best people the game has ever seen. Carrying himself with class everywhere he went, Rivera is well respected by baseball fans around the country — even fans of the Red Sox. The last player to wear the number 42, Mariano is truly a remarkable player and person.

Rivera has had his share of ups and downs this season, but overall it’s been another stellar year. Whether or not the Yankees can make the postseason, and eventually return to Fenway, is yet to be seen, but Rivera made sure his gratitude was known, saying, “I definitely appreciate what the Red Sox organization did. I will never forget that.”

And we will never forget Mariano Rivera — the greatest closer in baseball history.