It’s hard to believe, but the 2014 Major League Baseball regular season is almost over. Today marks exactly one month until the final games of the season, on September 28th, and teams are making their final push towards the postseason, with every player doing their best to finish out the season strong. With all of this going on, I thought I’d post an entry on the five main storylines I plan to watch throughout the final stretch.

Leading all of baseball in batting average (.332) and with 14 more hits on the season than the player with the second most hits, Jose Altuve is well on his way to recording his first 200 hit season of his career. With 181 hits this year, Altuve should easily make it to what has become a somewhat rare achievement.

The last time any player recorded 200 or more hits in a season was back in 2009, when Derek Jeter, Ichiro Suzuki, Ryan Braun and Robinson Cano all did it. For Altuve, he’s set to become only the second Astros player to ever record 200 hits in a season, with Craig Biggio, doing so in 1998, being the other.

Though Altuve is too far back to break Ichiro Suzuki’s all-time hit record for a season of 262 hits, it should be interesting to see how many hits he can amass in this final month.

Race for Stolen Base Lead

After Billy Hamilton set the all-time single season stolen base record for the minor leagues back in 2012, stealing 155 bases that year, many people began to proclaim Hamilton as the next Rickey Henderson. Those are some lofty expectations that Hamilton hasn’t quite been able to live up to, with Hamilton sitting on 50 stolen bases (the youngest Reds player to ever reach 50 stolen bases in a season) for the season and Rickey Henderson having stolen 100 bags in his first full year.

Hamilton currently sits eight stolen bases back of the leader, Dee Gordon, so he definitely has some work to do if he wants to finish out the year on top. But despite not running away in the stolen bases category like many people initially believed he would, Hamilton has done a phenomenal job of making adjustments this year. After a horrid start to the season, Hamilton has really turned things around, and if he can continue to get on base, he has the potential to rack up a ton of stolen bases in a short period of time.

How Jose Abreu Finishes the Year

Proving to have been one of the most valuable offseason pickups, Jose Abreu is posting one of the best rookie seasons we’ve seen in years.

Currently sitting on 33 home runs (he has a good shot at winning the home run crown, tied with Chris Carter and Giancarlo Stanton, and one back of only Nelson Cruz), 96 RBI’s and a .312 batting average, Abreu has done nothing but produce all season long, leading many to believe that he has the American League Rookie of the Year award completely locked up.

At one point in time, there was a good chance that Abreu would break the all-time home run record for a rookie, set by Mark McGwire back in 1987, when he blasted 49 home runs. But Abreu will inevitably come up just short of that mark, due in part to a brief stint on the disabled list earlier in the year.

Even so, Abeu will likely wind up with around 40 home runs for the season, and will be a major asset for the White Sox for years to come.

It can’t much tighter than it currently is in the American League West, as the Angels lead the Athletics by a mere game in the standings. With just a few more weeks of games, this is undoubtedly the division to watch most closely throughout the rest of the season. However, the wild card spots are looking to be just as intriguing, in both leagues.

On the American League side of things, whichever team doesn’t win the AL west between the Angels and A’s will end up taking the first wild card spot, but the Mariners, Tigers and even the Yankees are going to be fighting hard for that second wild card spot. In the National League, the Cardinals hold a slight lead for the first wild card, but the second one is anyone’s for the taking between the Giants, Braves, Pirates and Marlins, if they can keep pace through the month of September. It should be interesting to see which teams get the job done. 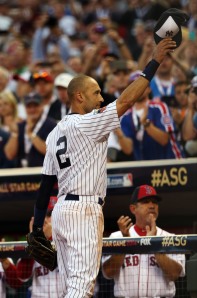 After having a disastrous 2013 season, in which he was injured and posted measly stats, Derek Jeter announced at the beginning of the year that 2014 would be his last. Therefore, all eyes are on Jeter to see how he performs in the final month of his farewell season. So far, Jeter isn’t doing terrible, but he’s not doing all that great either, batting just .267 with 3 home runs and 36 RBI’s.

But although Jeter isn’t producing all that much, he will still go down as one of baseball’s all-time greats, with over 3,400 career hits.

The one thing on everyone’s mind, however, is whether or not the Yankees can make the playoffs to give Jeter the chance at a sixth career World Series title.

Sitting 2.5 games back of the second wild card, there’s still a shot that the Yankees make it in, but it’s going to take a good amount of terrific play for them to reach the postseason.

It’s hard to believe but the 2013 MLB regular season is almost over. (Today marks exactly one month until the final games of the season, on September 29th.) Teams are making their final push for the post season, and every player is doing their best to finish out the season strong. With all of this going on, I thought I’d post an entry on the five main story lines I plan to keep an eye on throughout the final stretch.

It’s a two-man race, between the Orioles’ Chris Davis and the Tigers’ Miguel Cabrera, for who will receive the title of 2013 home run champion. But more importantly for Cabrera, he’s not just chasing down Davis for that title alone; Cabrera is trying to do what no one in the history of the game has ever been able to do: Win back-to-back Triple Crowns.

Davis currently holds a four home run lead over Cabrera (who is day-to-day, after suffering an injury in Thursday’s game) — Cabrera leads all of baseball in batting average and RBI’s — and with a mere month left of the season, it’s going to take a real display of power for Cabrera to overtake Davis. But if anyone can do it, Miguel Cabrera can.

Candidates for Rookie of the Year Award

The Rookie of the Year award is going to be a difficult award to decide, for both the American League and National League. Both leagues have several players that have strong cases, so it’s going to be interesting to see which player will have a great final month to move themselves above the rest.

Currently, top candidates from the American League, for the R.O.Y. award, include Wil Myers, Chris Archer and David Lough, while the National League has quite a few more top candidates, in Yasiel Puig, Matt Adams, Nolan Arenado, Jedd Gyorko, Evan Gattis, Hyun-Jin Ryu, Jose Fernandez and Shelby Miller, among others. Making this a story line well worth watching. 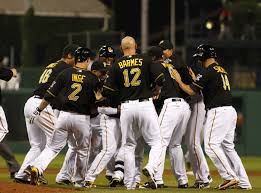 The National League Central is currently the closest of all the divisions in Major League Baseball. Less than four games separate the top three teams, being the Cardinals, Pirates and Reds. (This is the first season in 21 years that the Pirates will finish with a winning record.) With the Diamondback’s slowly falling out of the race to catch up — though there’s still a slight chance they could — it would appear to be between these three teams for who will win the division.

No matter which team is able to hold on in the final month of the season, to win the division, all three are likely to make the post season, with the extra Wild Card spot, that was added last season. 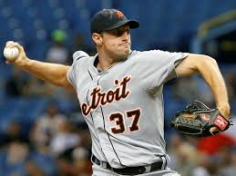 Of all of the great pitchers in the American League none have been as dominant throughout the entire season as Max Scherzer. Having gone 19-1 — only the third pitcher to ever start a season winning 19 out of their first 20 decisions — with a 2.90 ERA, Scherzer is well on his way to winning the Cy Young award, if he can keep up the great performance.

Though I think Yu Darvish will get a lot of consideration for the award — rightfully so, currently sitting at 12-5, with a 2.68 ERA, leading all of baseball in strikeouts — the award is currently Scherzer’s to lose, in the minds of many around the baseball world.

With 30 games left to play, the Houston Astros hold a win-loss record of 44-88 — the worst record in all of baseball. They currently sit 33.5 games out of first place in their division, and look to have a losing record for the fifth straight season. Having lost 107 games in 2012, and 106 in 2011, it will be interesting to see if the Astros can finish with fewer than 100 losses this season.

They’ll have to go 19-11, in their final 30 games, which isn’t impossible, but with it being the Astros, it’s not all that likely. It should be interesting to see if the Astros can at least finish out the year on a high note, after yet another disappointing season.

What’re you looking forward to? Leave a comment below.