Patience is a virtue — especially in baseball.

Max Scherzer proved that on Wednesday afternoon by officially inking a seven-year, 210 million dollar contract with the Nationals that’s set to keep him in D.C. through the 2021 season. Coming after Scherzer took the gamble of turning down a six-year, 144 million dollar offer from the Tigers last year, waiting things out until free agency, and betting on his abilities, paid off extremely well for him, with Scherzer netting a total of 66 million extra dollars.

But the money is well deserved, as Scherzer has quickly become one of the most feared pitchers in baseball. While Scherzer didn’t start off his career with fantastic pitching performances — posting a 4.43 ERA over 33 starts with the Tigers in 2011 — over the past two seasons he’s been one of the best. Going a combined 39-8 with a 3.04 ERA between 2013 and 2014, it’s no mystery why the Nationals wanted Scherzer so badly.

Heading to D.C. after five years in Detroit, Scherzer’s mega contract sits second all-time in amount given out to a pitcher, behind only Clayton Kershaw’s 215 million dollar deal with the Dodgers. (Kershaw, however, is in a class all his own.)

Choosing to receive his contract over the next 14 years, coming out to 15 million a year, the structure of Scherzer’s contract allows the Nats to use the money saved per season to lock up other talented players around him, making this an even better deal in the end.

With Scherzer joining a rotation that already consisted of Stephen Strasburg, Gio Gonzalez, Jordan Zimmermann and Doug Fister, the Nationals now have one of the best — if not THE best — rotations in baseball. (The Nationals also have a couple promising pitching prospects in A.J. Cole and Lucas Giolito in the minors who will be making major impacts over the coming years, so they will have additional pitching options for years to come.)

Although their bullpen could use some work after the loss of closer Rafael Soriano — there’s still plenty of time to improve that aspect of the team — the Nationals’ lineup is equally as talented as their pitching staff. From Ian

Desmond and Anthony Rendon to Jayson Werth and Denard Span, along with a hopefully healthy Ryan Zimmerman and Bryce Harper, the Nationals are going to score a lot of runs.

With the Nats likely setting themselves up to produce runs night after night, and a rotation filled with pitchers capable of giving up a few mere runs a game, the Nationals have a nice combination that should lead them to a ton of wins in 2015.

After going 96-66 last year — good enough to earn Nats’ skipper, Matt Williams, the National League Manager of the Year award — there is truly no reason they couldn’t post a 100-win season this year. If that happens, it will make them the first team since the Phillies in 2011 to win 100+ games in a season.

And therefore, after winning the National League East division by a staggering 17 games a year ago, the Nationals could be looking at the same type of dominance in the foreseeable future. The Braves, who finished in second place for 2014, are in the process of rebuilding and currently seem to be out of the postseason picture for 2015, as do the Phillies who are theoretically trying to find their new identity. That leaves just the Marlins and the Mets to challenge the Nationals for the divisional title — though both teams, especially the Marlins, could make a big push towards the playoffs this year.

Even so, the Nationals are nearly a lock to make the postseason for the third time in four seasons, with an aforementioned 100-win season not completely out of the question. They have all the talent in the world, with great pitching and a good mix of young and veteran star players. But in the end, making the playoffs is only part of the goal. The one question on everyone’s mind is whether or not the Nationals have enough with the addition of Max Scherzer to lead them to the World Series and a subsequent World Title?

The unfortunate truth is, only time will tell. All too often does a team expected to dominate fall into a slump and not do much of anything for the season, while a team that was predicted to go nowhere exceeds expectations and makes a playoff push. That’s baseball. That’s what makes things fun each and every season.

But regardless, I have to agree with the majority of people that the Nationals are going to be terrific, and therefore anything short of a World Series appearance for them would be a disappointment with all the promise they have of putting out an effective winning machine this season.

After all, it’s that very expectation of winning (I’m sure the money was a factor as well) that ultimately led Scherzer to sign a deal with the Nationals, saying, “I think this team is capable of winning and winning a lot. When you look at near term and long term, this is an organization you want to be a part of . . . . I want to win and that’s why I’m here.”

With Max Scherzer now on board, it looks to be an exciting season in D.C.

Monday was a busy day for Major League Baseball’s Hot Stove. Several players either signed or were traded, making an otherwise slow offseason pickup a bit. I won’t take the time to go over every single deal that has taken place recently, however, I do want to give my thoughts on the main deals that took place on Monday — and one from today.

The biggest deal, by far, was the Tigers trading Doug Fister to the Nationals, in exchange for Minor League player, Robbie Ray, along with Nat’s second baseman, Steve Lombardozzi, and rookie pitcher from 2013, Ian Krol. This deal helps out the Nationals most, as they have a young prospect, Anthony Rendon, who’s ready to take over at second full time, and Krol and Ray aren’t a lot to lose for a pitcher of Fister’s caliber. (Fister went 14-9 with a 3.67 ERA in 2013.)

On the Tigers’ side of things, while it doesn’t seem to make a ton of sense, they’re going to use the money saved by getting rid of Fister to sign Joe Nathan to fill their closer role. The Tigers are still left with a rotation of Max Scherzer, Justin Verlander and Annibal Sanchez, and the signing of Nathan will help them out tremendously.

Theoretically, this furthers the case for the Tigers hanging onto Scherzer, instead of trading the 2013 Cy Young award winner, but it’s still possible that they will. What the Tigers really needed was a closer, and they’re getting a good one in Joe Nathan, who recorded 43 saves in 2013.

As far as closers go, Jim Johnson is one of the games best at the moment, and he was part of a deal between the Athletics and Orioles that sent him out to Oakland for Jemile Weeks — a low-end player who only spent eight games in the Majors last season, batting .111 — and a player to be named later. Johnson, who posted a 2.94 ERA last season while recording 50 saves, has achieved at least 50 saves for the past two seasons. (His 101 saves over the past two years is the best in baseball.) He should improve the A’s bullpen drastically. 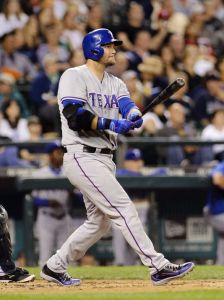 The Athletics also signed Scott Kazmir to a two-year deal, who was decent in 2013, having the best season of his career since 2008, and will join a pretty good rotation of players such as Sonny Gray and Jarrod Parker.

This signing likely ends their pursuit of Bartolo Colon, who was great last season, going 18-6 with a 2.65 ERA, but was asking for more money than the A’s were willing to give him. But even if Colon leaves, the signing of Kazmir and Johnson makes them a much better team, at least as far as their pitching goes.

After the great season he had with the Rangers in 2013, batting .272 with 17 home runs and 70 RBI’s, the Red Sox signed free agent A.J. Pierzynski to a one-year contract on Monday.

This more than likely means that the Sox’ catcher from this season, Jarrod Saltalamacchia, will be headed to another team, despite posting decent stats of 14 home runs and 65 RBI’s to go along with a .273 batting average in 2013. As I stated in a previous post, I feel the Rangers would be a good fit for Saltalamacchia, however, it all depends on what the Rangers are looking to do.

With four months remaining until the 2014 season, anything can happen.

This is the third in a series of four blog posts that I plan to type up between now and Friday; all of which will focus on who I feel should win the three major awards of Most Valuable Player (MVP), Cy Young and Rookie of the Year (ROY). (If you haven’t read my posts on who I think should win the AL MVP, NL MVP and AL Cy Young, go ahead and check those out now.)

If you’ll remember back to my post on American League Cy Young, I tend to rely purely on stats when making a pick for which player most deserves the Cy Young award. In fact, there were SO many good candidates for National League Cy Young that I ended up letting the stats make the decision for me.

I took the National League starting pitchers with ERA’s below 3.00 (seven pitchers in all) and compared them from 20 different statistical angles. (I chose to use so many different stats to compare them because I felt that using Wins, ERA and strikeouts alone didn’t tell the whole story of how good a particular pitcher was.)

My method works as follows: The pitcher with the best numbers in a given category receives 1 point; with the 2nd, 3rd, 4th, etc., place pitchers receiving the corresponding point amount. (The occurence of a tie in a particular category results in the tied players receiving the same point amount.) In the end, the pitcher with the lowest combined total would be my pick for the Cy Young award.

It took me awhile to crunch all of the numbers, but once I finally finished, this was the result:

(I realize it’s a bit blurry. You can click it for a clearer look.)

For those of you that still can’t read the chart (even after clicking on it) here are the results of the comparison:

As you can see, Clayton Kershaw came out on top, thus making him the statistical winner (and my pick) for the 2012 National League Cy Young award. (This would make his second straight Cy Young; as he won it in 2011.)

Though Kershaw’s record of 14-9 would argue against it, he had an outstanding year; leading all of MLB starting pitchers in ERA. While we’re on the subject of the win-loss record: I feel it can be a bit misleading.

Though 15 other National League pitchers had more wins than Kershaw (with Gio Gonzalez recording 21) the win-loss record is one of those stats that’s out of the pitcher’s hands for the most part. As the pitcher, you can go out there and throw a gem of a game–giving up only a couple runs–but if the lineup isn’t clicking on that particular day, you’re not going to get the win.

So, while it would appear at first glance that Kershaw didn’t have a Cy Young worthy year, if you take the time to look closely you can clearly see that Kershaw was the NL’s best all-around pitcher of the season; and as such, is my pick for 2012 National League Cy Young.

Do you agree or disagree with me?

As always, feel free to leave a comment below.