He’s not in the top 100 prospects. He’s not a well known name around the baseball world. But Francisco Mejia is a name that every baseball fan needs to become familiar with. 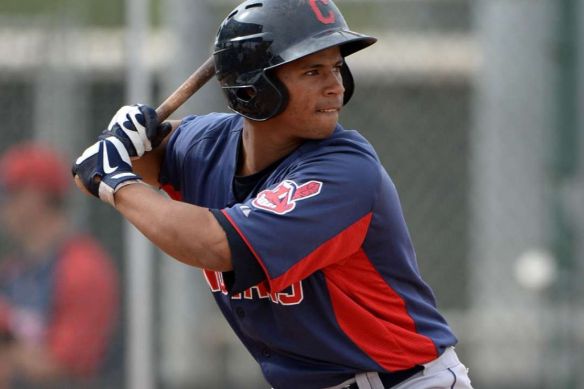 To this point in the season, as part of the Indians’ farm system, Mejia is hitting .345 with 9 homers and 67 RBI’s combined between two different levels. While those stats are impressive in themselves, it’s his current 40-game hitting streak that is beginning to cause people to pay attention.

Although not as publicized as Major League Baseball’s all-time hit streak record of 56 games, set by Joe DiMaggio back in 1941, the minor league all-time hit streak is even more impressive in terms of the overall number. While the hits usually don’t come against major league level talent, making it not quite the feat of the big league milestone, the record of 69 straight games with a hit notched by Joe Wilhoit back in 1919 is still something very historic as a part of baseball history as a whole.

The last time Mejia didn’t record a hit in a game was over two months ago, back on May 25th. Since then, he’s been on a tear, and is making his name more known around the baseball world, becoming just the 16th player to record a hitting streak of 40 or more in minor league history. The most recent run at the record was in 2009, when James McOwen reached 45 games, but no one has come close to challenging the top mark in a very long time.

At just twenty years old, Mejia is still developing as a player, which is exciting when you think about it. While he may not go on to break the all-time hit streak record in the minors, Francisco Mejia is definitely on his way to become a very special player for the Indians.

Tallying yet another hit on Thursday night against the Rangers, Nolan Arenado pushed his average for the season up to .322, but more importantly extended his league-leading hitting streak up to a respectable 28 straight games. That puts him first in Rockies’ history in terms of 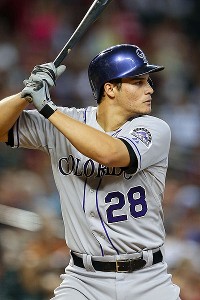 consecutive games with a hit, surpassing Michael Cuddyer’s mark of 27 games, which he set last season.

Sitting halfway from Joe DiMaggio’s all-time hitting streak record of 56 games, it’s far too early to begin talking about Arenado charging past, arguably, the most impressive baseball record of them all — one that many people believe will never be beaten. (If it were to happen, Arenado’s 57th straight game with a hit would come on June 11th in Atlanta).

Nonetheless, what Arenado has been able to do over the past month or so — getting at least one hit in every game since April 9th — has been nothing short of remarkable.

But hitting streak aside, at just 23 years old, Arenado is quickly earning the recognition and respect that he deserves as one of the top young players in the game today.

After becoming just the tenth rookie to ever win a Gold Glove award, for his defense at third base in 2013 that rivals nearly every other infielder in all of baseball, Arenado is on his way to becoming a full on superstar.

And therefore, if you aren’t familiar with Nolan Arenado — perhaps you hadn’t ever heard of him until reading this post? — start paying close attention. Arenado is an extremely exciting player, and from what he’s been able to accomplish so far in his young career, the future would appear to be bright for Arenado (and the resurging Colorado Rockies) moving forward.