While a twenty win pitcher occurs seemingly every year, and a player (or several) always reaches the aforementioned magic numbers for a hitter, it is becoming more and more rare for a team to pick up 100 wins in a season. In fact, there hasn’t been a single 100-game winner in all of baseball since the 2011 Phillies. Taking things even deeper, two or more teams haven’t reached the 100-win mark in a single season since 2004, after a streak of multiple 100-game winner from 1998 through 2004 (with the exception of 2000).

It would appear, however, that both droughts could be broken in 2015.

With that in mind, I decided to take a look at the division winners from 2014 — the teams with the best shot at making a strong run in 2015 — and attempt to project how many, if any, of the teams could potentially obtain 100 wins in 2015:

East – Orioles (96-66): The Baltimore Orioles completely blew away all of the competition in the American League East

last season, winning by a total of twelve games over the second place Yankees. But while they were a terrific ball club last season, things are likely going to take a bit of a downfall in the coming season.

The biggest reason for the fall being that they O’s lost a good chunk of their offense via trades and free agency throughout the past few months. No longer possessing slugger Nelson Cruz, veteran outfielder Nick Markakis or reliever Andrew Miller, things are sort of up in the air for how the Orioles will perform in 2015.

Therefore, even if they surprise some people, I don’t think they’ll be able to pull off the stunning feat of winning 100+ games.

Central – Tigers (90-72): For the Detroit Tigers, they are a particularly intruiging team. For the past couple of years, there’s no reason they shouldn’t have been able to pull off a 100-win season, playing in somewhat of a weaker division, however, the Tigers have disappointed to a degree.

Having a great lineup and pitching staff, the Tigers have recently been in the preseason World Series predictions by a number of people throughout the baseball world. But things just haven’t panned out.

Having lost Max Scherzer — their undeniable ace of the pitching staff — to the Nationals, and with certain players not performing up to their potential, I’d say it’s going to be tough for the Tigers to even hold off the Royals from taking the division crown. A 100-win season was doable over the past few seasons, but the opportunity for them has come and gone.

West – Angels (98-64): The Angels fall into a category much like the Tigers. The slightly more successful version of Detroit, many people saw the Angels winning it all in 2012 after the acquisition of Albert Pujols, but injuries and underperformance in general have caused the Angels to come up short. 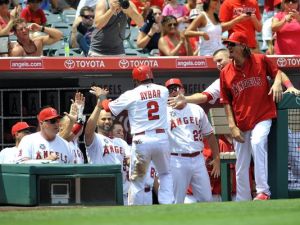 But falling just two wins shy of the coveted 100-win plateau in 2014, things look promising that the Angels could become the first team in four years to hit triple digits.

Their lineup is there — with the exception of Josh Hamilton, who is a huge question mark — and their pitching is good as well.

The only thing standing in their way are the other teams in the West. The Athletics — despite an offseason deconstruction — always seem to be in the mix, and the Mariners are very good as well. It will be exciting to see what happens.

East – Nationals (96-66): Without question, the number one team to watch throughout the 2015 season is the Washington Nationals. After

putting together a 96-win season last year — winning the National League East division by a major league best 17 games over the Braves — the Nationals could likely make a run at 100 wins if they put out the exact same roster from 2014. But their roster is better than last season — much better.

Picking up Max Scherzer who has gone 39-8 with a 3.02 ERA over the past two seasons, their pitching staff is the top one or two in all of baseball. If Scherzer can continue to pitch as he has over the recent history of his career, and if supposed phenoms Bryce Harper and Stephen Strasburg can finally put up super star caliber numbers, the sky is truly the limit for what appears to be an extremely dominant Nationals team.

Central – Cardinals (90-72): I am a strong believer that the National League Central Cubs will make a run at the postseason as soon as 2015, but they by no means will win 100 games. The Cardinals, though, stand a chance, however slight it may be. Given, it would have to be a ten win jump from their record in 2014, the Cardinals are one of those teams that could surprise some people.

With a decent rotation that includes the always reliable Adam Wainwright, and a lineup that possesses All-Star catcher Yadier Molina, who can make any pitcher look like a former Cy Young winner, the Red Birds will win a lot of games moving forward. The division isn’t extremely strong, and their track record has proven that the Cardinals can go on a run with the best of them. Still, it won’t likely add up to a 100-win year for them.

West – Dodgers (94-68): A pitching rotation that includes Clayton Kershaw is always sure to be a terrific one. But

the Dodgers’ staff doesn’t begin and end with Kershaw. He’s their best pitcher, no doubt, but the addition of Brandon McCarthy to go along with Zack Greinke and Hyun-Jin Ryu will go a long way in a 2015 quest for 100+ wins.

But the Dodgers will be without on and off superstar Matt Kemp in the outfield — the hope is that Joc Pederson will fill the role there — and the loss of Dee Gordon and Dan Haren will certainly have an impact. The lack of those players could be enough to keep them from winning the division like they were able to do in 2014.

Nonetheless, despite all of the losses, the pickup of veteran infielder Jimmy Rollins in addition to promising backstop Yasmani Grandal should lead to a decent enough lineup. If I had to guess, though, the Giants will be riding them too closely for the Dodgers to break 100 wins.

In conclusion, while every season is unpredictable, this year could see a 100-game winner (or two) for the first time in four seasons. But even if that doesn’t happen, there are teams such as the Cubs, White Sox and Padres who will make legitimate playoff runs after failing to do so in quite some time. That alone is enough to cause any baseball fan to continue counting down the days until Opening Day.