The 2014 Major League Baseball Hall of Fame ballot is loaded with stars. (There are 36 players in all, with 19 of them being first ballot players.) Whether the player has been on the ballot for numerous years or is a newcomer, there are far too many players for me to give my take on them all. Therefore, I’m only going to be discussing the players I’d vote for if I had a vote, and provide my reasoning for each.

The first player on my ballot would have to be Greg Maddux.

Maddux, who will go down in history as one of the best pitchers the game of baseball has ever seen, racked up a total of 355 wins over the course of his 23-year career. As if that wasn’t enough to make him a first-ballot Hall of Famer, Maddux also put together a stat line of 3,371 strikeouts, to go along with an ERA of 3.16, and 4 straight Cy Young winning seasons. In addition, Maddux holds the record for most Gold Glove awards with 18, and should be one of the highest vote getters in Hall of Fame voting history.

The second vote on my ballot goes to Frank Thomas.

Thomas put together an incredible career, and would be an automatic pick for the Hall of Fame if it wasn’t for the steroid era in which he played. But despite that, I feel Thomas will get in as a first ballot player, and rightfully so, seeing that he was never directly connected to PED’s. Blasting 521 home runs in his 19-year career, totaling 1,704 RBI’s, “The Big Hurt” has some of the best stats seen on the ballot in years (with the exception of Barry Bonds). With a .301 batting average to go along with his amazing numbers, and two career MVP’s, Thomas should receive the second most votes from the 2014 ballot, after Greg Maddux.

The next player I have is Tom Glavine.

Glavine, as with Greg Maddux, is one of only 24 pitchers to have put together 300 or more career wins (305), done in his 22 seasons in the major leagues. Anytime a pitcher accomplishes this great feat, it’s almost a no brainer that they’re a Hall of Fame player, as a 300 game winner is nearly unheard of nowadays. Glavine also has two Cy Young awards and 2,607 strikeouts to go along with his other impressive numbers, and that, in my mind, should earn him a spot in Cooperstown.

The fourth player on my ballot is Mike Piazza. 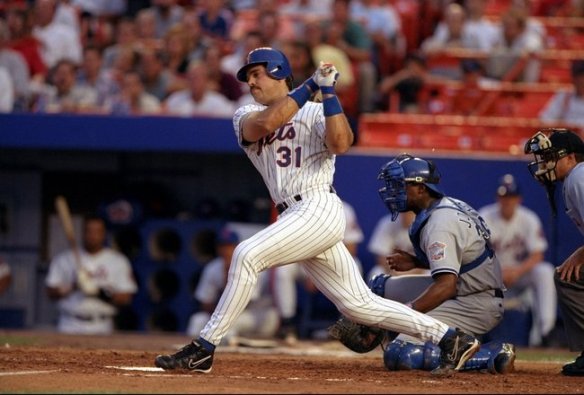 Piazza doesn’t have the most impressive numbers of the players on this year’s ballot, however, the stats that he put together over his career, although not good enough for a first ballot vote, are good enough for the Hall of Fame, in this his second year on the ballot. In my mind, despite barely surpassing the 2,000 hit mark and sitting 90th all time in terms of RBI’s, Piazza put together one of the best ever careers for a catcher. He is fourth on the list of catchers in baseball history for most RBI’s and leads all catchers in home runs. When you combine it all together, it makes Piazza a Hall of Fame player.

The final player I would vote for from this year’s ballot is Craig Biggio.

Biggio was the top vote getter of the players on the 2013 Hall of Fame ballot, receiving 68.2 percent of the vote, which saw no players getting the necessary 75 percent to be elected. Biggio should get in this time around — many believe he should’ve been a first ballot Hall of Famer — as his 3,060 career hits put him on a list with just 27 other players who have compiled 3,000 or more hits. Biggio’s 291 career homers and 1,175 RBI’s are low for a Hall of Fame player, however, there is a very good case for making an exception for Biggio making it into the Hall.

Unfortunately, with all of the great players this year, I decided to leave off a few of the really good players from my ballot, including Jack Morris (who is in his last year of eligibility), Tim Raines, Don Mattingly, etc., even though I could’ve easily included them. I just didn’t think they were good enough to make the cut this year. In addition, I’ve excluded Barry Bonds, Mark McGwire and Rogers Clemens, among others traced to PED’s, not based solely on their PED use, but merely because I don’t feel they should get in this time around. Not yet. Maybe not even at all. I haven’t fully decided how I feel.

Though you may disagree with some of the players I feel are Hall of Fame worthy and with some of the players I left off my ballot, it’s just the way I feel and how I see things. Now, I want to hear from you. Of the players on the 2014 ballot, who do you want to see get elected along side of Bobby Cox, Joe Torre and Tony LaRussa in July? Cast your vote below for the number of players from the 2014 ballot that you would vote into the Hall of Fame, and feel free to leave your thoughts below.