Monday was certainly a big day in the baseball world.

Not only did one of the game’s biggest stars sign a contract unprecedented in the history of the sport — or any sport anywhere for that matter — but a catcher from the Steel City was locked up by the Blue Jays long term, and the Cardinals and Braves swapped players to help fill each others needs.

Giancarlo Stanton kicked off the news filled day, finally signing the mammoth contract that everyone knew would eventually come. While many 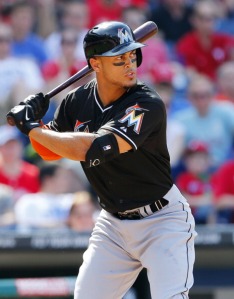 people predicted it would come from a team other than the Marlins, the Marlins were in fact the team that got a deal with Stanton done.

A team that was at the bottom, in terms of team combined payroll, this past season, the Marlins locked up Stanton to a 13-year, 325 million dollar deal (the largest in the history of North American sports).

In addition to being so large, Stanton’s deal comes with a full no-trade clause — previously unheard of for the Marlins’ franchise — as well as an opt-out clause after the 2020 season. Having just turned 25 year old, the Marlins logic behind this major contract to such an impact player, who has legitimate 40+ home run a season potential, can easily be understood.

Despite a season ending injury in September, Stanton posted career numbers this year, batting .288 with 37 home runs and 105 RBI’s, and finishing second in National League Most Valuable Player voting.

Tied with Dan Uggla for the most home runs in Marlins’ franchise history, with 154, Stanton will undoubtedly pass that mark early on in 2015, having hit over 20 home runs every single year of his five career seasons. A two-time All-Star, Stanton will surely go on to set numerous records while in a Marlins uniform now that this contract is officially in place, and could go down as one of the best sluggers in baseball history once all is said and done.

But Stanton wasn’t the only player that was locked up to a sizeable contract on Monday. 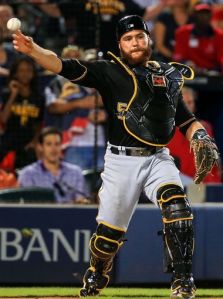 Also getting signed on the day was veteran catcher, Russell Martin, who agreed to an 82 million dollar contract over the course of the next five years from the Blue Jays.

Playing his last two seasons with the Pirates, after time spent between the Yankees and the Dodgers since his debut in 2006, Martin has been an up and down player over the course of his career, but should be an impact player for the Jays.

Previously a combined .234 hitter over his past five seasons, including a career low .211 in 2012, Martin truly made a name for himself this past year, and should make the Blue Jays glad they snagged him.

While Giancarlo Stanton and Russell Martin both signed contracts with their given teams, there was a big trade between the Cardinals and Braves that everyone was talking about as well.

The Cardinals received Jason Heyward and Jordan Walden in exchange for Shelby Miller and minor league prospect Tyrell Jenkins, who got sent back to the Braves. Though none of these players can be categorized as major stars, at least as of yet, they all have the ability to be key pieces of each team moving forward, and the trade truly made sense for both sides. 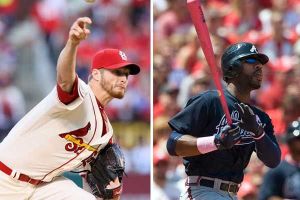 With their starting rotation being one of their many issues from the 2014 season, the additions of Shelby Miller and Tyrell Jenkins (both former first round draft picks) will likely do wonders for the Braves in the coming years.

Miller, who hasn’t yet been the consistent starter many envision him becoming, was decent in 2014, posting a 3.74 ERA on the season. As was Jenkins, who notched an ERA just above three over 13 minor league starts this year. Each of them have the capability to be standout players.

In the same way that the Braves needed starting pitching, the Cardinals found themselves in need of a good everyday right fielder, after the unexpected loss of their future superstar right fielder, Oscar Taveras. Jason Heyward certainly fills that role, though he hasn’t yet lived up to his superstar potential.

While Heyward has won a couple of Gold Gloves in his career with the Braves, making a lone All-Star appearance in his rookie season, he’s only a career .262 hitter. In addition, since a breakout year in 2012 when Heyward blasted 27 home runs and drove in 82 runs, he hasn’t notched more than 14 homers or upwards of 58 RBI’s in any single season.

Even so, Heyward is the type of player that can instantly improve any club he’s on. Gaining him (along with Jordan Walden, who posted a 2.88 ERA in 2014) can only help the Cardinals as they look to make another playoff run in 2015.