It’s been nearly a year since we last saw Tim Lincecum pitch in a Major League Baseball game, but that will soon change. After being rumored to have made Lincecum an offer earlier this week, the Angels finally made a deal with him official on Friday, signing Lincecum to a one-year contract for the 2016 season worth around two million dollars (plus incentives). 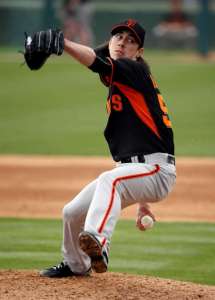 As a Lincecum fan, I’m certainly happy to see him on his way back to pitching in the majors (it’s believed that he will need a few starts in the minors to get ready), but I also find myself questioning just which Tim Lincecum the Angels are getting. After all, he’s been extremely inconsistent over the past several years.

Following a stellar start to his career, in which Lincecum recorded back-to-back Cy Young award seasons in 2008 and 2009, the former first-round pick has gone down hill ever since around the 2012 season.

After posting his final sub-three ERA year in 2011, Lincecum proceeded to see that number rocket up to 5.18 over the course of 33 starts made in 2012 (given, the Giants still went on to win the second of Lincecum’s three career World Series rings that season).

Over the past four seasons, the soon-to-be 32-year-old Lincecum has notched a collective 4.68 ERA over 106 games started, all before being shut down mid-season in 2015 due to a degenerative condition in both hips. It took Lincecum all of the offseason as well as Spring Training and the first two months of this season to get healthy, but he appears to be fully recovered from his injury, impressing many with a pitching showcase two weeks ago in Arizona.

The Angels certainly could use a fully healthy starter in their injury-plagued rotation. After the loss of Garrett Richards for the remainder of the 2016 season, who had a 2.34 ERA so far on the year, as well as Andrew Heaney (and C.J. Wilson until June), the Angels needed someone to replace some of those lost innings. They appear to have found their guy in the form of Tim Lincecum.

Sitting 4.5 games back in the American League West, the Angels have a bit of work to do but aren’t completely out of things, with it still being very early in the season. The Mariners are performing better than most people believed they would, and the Astros have been a major disappointment so far, so anything can truly happen in that division.

Although Lincecum’s old team, the Giants, are riding an eight-game winning streak, the Angels are more than capable of going on a big run and getting back into the mix. Signing Tim Lincecum goes a long way in making that a possibility. 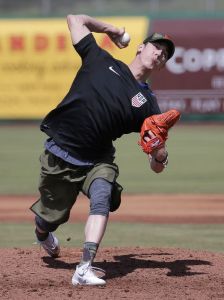 With decent production coming from Nick Tropeano and Hector Santiago to this point, Lincecum will likely slide into the middle to back end of the Angels rotation, but that’s a step in the right direction for a guy who was predicted to inevitably have to begin his journey back into being a big leaguer as a bullpen piece. The Angels have given Lincecum a big opportunity to begin as a starter right out of the gate.

With that in mind, however, I don’t think Lincecum will let them down. In fact, I think he may turn out to be a bit better than anticipated.

Throughout his poor outings over the last several seasons, Lincecum has thrown sporadic quality games, recording a no-hitter in both the 2013 and the 2014 seasons. He’s still a major league caliber pitcher, especially now that he’s reportedly fully healthy and ready to go.

Perhaps Lincecum won’t ever be an All-Star again — as he was in four straight seasons from 2008-2011 — but the Angels don’t need him to be. They’re getting a fan-favorite, and, more importantly, a guy who knows how to win, and has proven his value over and over again throughout his career.

In the end, no matter what happens, the Angels lose nothing (besides a couple million dollars) by signing Tim Lincecum. On one hand, if Lincecum flops, they’re no worse off than if they had passed on signing him in the first place. But on the other hand, if Lincecum returns to even a portion of his former self, the Angels may have just helped their team out in a big way. It’s the definition of a low-risk, high-reward type of deal.

When it comes to a guy like Tim Lincecum, I’d take that deal every time.

With a sharply hit ground ball that bounced its way into left field, Jose Altuve notched his name into the record books on Wednesday night, recording his 200th hit of the 2014 season. Just the second Astros player to ever reach that mark, and the first player in Major League Baseball to do so since 2009, Altuve is undeniably having a career season that many players only dream about.

Altuve leads all of the majors in hits (27 more hits than the next closest player), batting average (.336) and multi hit games. In addition, with his 52nd stolen base on Wednesday, Altuve also leads the American League in steals, and joins a rather elite group of players to have recorded 200 or more hits to go along with 50 or more stolen bases in a season, with Jose Reyes being the last to accomplish that feat back in 2008.

Although the Astros’ playoff drought continues, having not made the playoffs since 2005, Altuve has been one of the many bright spots on the team, with several players having standout years. While Altuve is having the best all around season of them all, players such as Chris Carter and George Springer are also having great years for the Astros, despite holding low batting averages.

However, low batting average is a major issue with the entire Astros team, with only two other players besides Altuve batting over .250 on the season. That’s something that will need to be addressed for next year, but with this being the first year since 2010 that the Astros are going to finish with a record of fewer than 100 losses, things are definitely moving in the right direction.

Jose Altuve reflected that in his comments on Wednesday, stating, “We win this game and get 200 hits and the momentum we’re having right now, it’s pretty special for me. The team is playing great. I couldn’t ask for more. We’re going outside, playing hard, we’re winning, and I think that makes me feel really good.”

While I don’t see a playoff push anytime soon for the Astros — playing in the difficult American League west division that includes a good Mariners, Angels, Athletics, and Rangers team (once they return to full health) — they could definitely make things interesting next season. With their offense clicking fairly efficiently, and their pitching doing terrific (Astros starters are now 6-0 with a 1.95 ERA in the team’s past 10 games), the Astros are certainly a team to watch.

Having won eight of their last ten games, over which Altuve has recorded 16 hits to make for a .390 average, the Astros are giving their fans something to get excited about for the first time in quite awhile. With Jose Altuve approaching the Astros’ all-time hit leader for a season, Craig Biggio, who recorded 210 hits in 1998, Astros fans should be excited about where this team is headed.

Though they may not be raising a World Series trophy anytime soon, they’re slowly but surely finding a way to win games against good teams. That’s something to look forward to seeing more and more as the seasons go on, with Jose Altuve leading the way.