When I made the bold prediction a couple months ago that the New York Yankees would have a great season despite all of the injuries to their lineup, going as far as to say they’ll make the playoffs, I didn’t have many people behind me, agreeing with my opinion. And that’s fine, I’m used to it. But now I get the pleasure of early-season bragging rights, as the Yankees have hung in there, sitting atop the American League East.

Though there’s still a lot of the season left, I think things will only go up from here. 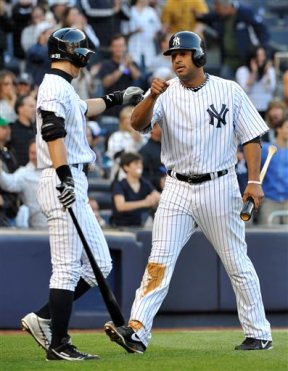 Let me point out that while I predicted a playoff run, I was going more on a wild card spot, rather than a division title, getting them in. I never saw them above second or third place throughout the season. But now, with them sitting in first place, combined with Curtis Granderson expected to return any day, I could see the Yankees extending their lead even further; especially once Mark Teixeira returns next month.

What it’s come down to for the Yankees is the stepping up of every single player in the lineup. Not just the key fixtures, in Robinson Cano, Ichiro Suzuki and even Brett Gardner, but the newcomers in Vernon Wells, Lyle Overbay and Travis Hafner. Everyone up and down the lineup has been doing a great job of not worrying about who they’re missing and just going out and playing great baseball–going 16-0 when they score first, so far this season.

The Yankees are certainly being helped out by the other teams in the division, which have been playing fairly poorly as of late–the Red Sox are 4-8 this month–but that’s not to take anything away from them. They’ve been surprisingly good for a surprising long period of time.

But just how good can the Yankees become?

If you ask me, the first month of the season is a sign of things to come. Once the Yankees get back their big bats in Granderson and Teixeira, they’ll get even better, which may seem impossible with the way they’re currently playing. If their pitching rotation can keep on the same pace, though it could always be better, I can fully see the Yankees making the playoffs, as I originally predicted.