For the first time since 1918, the Boston Red Sox have won the World Series Championship in front of their hometown fans, beating the St. Louis Cardinals 6-1 in game six; four games to two overall. The Red Sox become just the second team in MLB history to win the World Series one season after finishing in last place, joining the 1991 Twins.

Truly incredible when you think about it.

While this was a relatively exciting series, the Cardinals just didn’t have what it took to beat the Red Sox, who were extremely hot at the right time of the year. No player on the Sox was hotter than David Ortiz, who hit .688 with two home runs and six RBI’s in the series, earning him MVP honors. He also holds the distinction of being the second player in Red Sox history to have won three rings with the team — a true Red Sox legend.

Game six was a pitching rematch of game two, with Michael Wacha and John Lackey on the mound for their respective teams. Wacha would have a very uncharacteristic game, allowing six runs through his 3.2 innings pitched. That’s more runs than he had allowed in his previous four postseason starts combined.

The runs came in the third inning, after a good first two innings, on a three-run double by Shane Victorino, and a solo-shot homer by Stephen Drew, along with a few timely hits for a couple more runs, in the fourth. The Sox wouldn’t score again, but the six runs are all 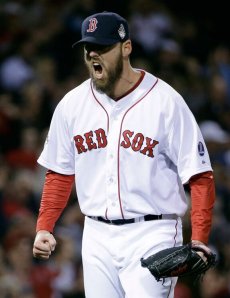 John Lackey was dominant, going 6.2 innings only giving up a single run. He would exit the game in the sixth, with the bases loaded after a couple of hits and a walk, however, his replacement, Junichi Tazawa, would get Allen Craig to ground out to end the threat. That was the nail in the coffin, as the Cardinals wouldn’t come close to scoring a run again.

Koji Uehara, who’s been fantastic for the Red Sox throughout the regular season and postseason, with a World Series ERA below one, got the final three outs of the game to secure the Red Sox their eighth World Series title in franchise history.

This is just their third Championship in 95 years — going 86 years without a title — so it’s not like they’re beating out everyone else season after season. When they win they truly have a magical year.

Ask any Red Sox fan or player and they’ll tell you this season was just that — magical.

The 2013 Major League Baseball Gold Glove award winners were announced last night on ESPN2. There were multiple first-time winners, but everyone that won was extremely deserving — though I might not agree with them all.

The Gold Glove Award is an award given out each year to the players that are judged to have exhibited superior individual fielding performances at each fielding position in both the National League and the American League, as voted by the managers and coaches in each league. (Managers can not vote for their own players.)

This marks the 56th annual Gold Glove Awards, which began back in 1957.

Here’s a recap of the winners, with my thoughts on each:

Salvador Perez was the most deserving of this award, among the nominees. While they’re all great players, Perez had the overall better year; becoming the first Royals’ catcher to receive the award since 1989. On the National League side, Yadier Molina winning was an obvious choice. He picks up his sixth career Gold Glove.

After winning his first career Cy Young award last season, R.A. Dickey picks up his first career Gold Glove. Though he had his share of rough games, he had an overall decent season. But I would’ve liked to have seen Mark Buehrle win. Of the nominees, it was a rather difficult choice for NL, but Adam Wainwright ended up getting the accolade.

Alex Gordon picks up his third straight Gold Glove, beating out Andy Dirks and Yoenis Cespedes in the AL. Carlos Gonzalez, like Gordon, received his third career Gold Glove award. Both were deserving, in my mind, and both have the potential to win several more before all is said and done.

After winning a Gold Glove in 2012 — many feel Mike Trout got snubbed — Adam Jones picks up his third career award, as he had another really great year. Carlos Gomez picks up his first career Gold Glove award, for the National League, having a deserving season for the Brewers.

Both Shane Victorino and Gerardo Parra aren’t really acknowledged all that often for their gloves, however, both are really good right fielders for their respective teams. This is Victorino’s fourth Gold Glove, and Parra’s second. Both have the potential to win more down the road.

For me, it came down to Dustin Pedroia and Robinson Cano, as both had great seasons and always seem to flash their gloves at some point during nearly every game. Pedroia ended up receiving the Gold Glove, which I’m completely fine with. Brandon Phillips winning his fourth career Gold Glove award is another one I’m fine with. Amazingly talented players on both the AL and NL sides.

I was a bit surprised with J.J. Hardy winning, however, I don’t really have a problem with it. He was deserving of the award. Andrelton Simmons was also deserving of the award, as he made some amazing plays this past season and is worthy of his first Gold Glove. Simmons is a player to keep an eye on to win several more in his future.

When you’re having to pick between Adrian Beltre, Evan Longoria and Manny Machado for the third base Gold Glove award you run into a problem: They’re all very deserving. But I have to agree with Manny Machado winning, as he had an incredible year, slightly greater than Longoria or Beltre. Nolan Arenado picks up his first career Gold Glove, for the NL, but it’s likely to be just one of many in his career.