The 2015 Silver Slugger award winners were announced Thursday night on MLB Network. While the Gold Glove awards given out on Tuesday focused on the defensive side of baseball, the Silver Slugger awards are given annually to the best offensive player at each position in both the 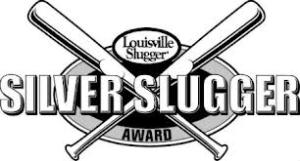 American League and the National League.

Marking the 36th annual Silver Slugger awards, which began in 1980, the awards are voted on by the coaches and managers of Major League Baseball (managers can not vote for their own players), with voters considering several offensive categories in selecting the winners. Those categories include batting average, slugging percentage and on-base percentage, in addition to coaches’ and managers’ general impressions of a player’s overall offensive value.

Barry Bonds’ 12 career Silver Slugger awards stand as the most all-time by a single player at any position, and no one from this season’s winners are even close. Here are the list of winners with my thoughts on each:

The year that Bryce Harper had was historic, and he more than deserves the Silver Slugger, blasting 42 homers all while hitting .330 and tallying a 1.109 OPS (the second highest ever for a player age 22 or younger, behind only Ted Williams). Andrew McCutchen picked up his fourth consecutive Silver Slugger award after another solid year with the Pirates, and Carlos Gonzalez won his second career award by having an explosive second half of the season in which he hit 27 of his 40 homers for 2015. On the American League side of things, it was Mike Trout picking up his fourth Silver Slugger, having now won the award in each of his first four MLB seasons. Trout cranked out 41 homers while hitting just a tick under .300, and proved even further that he is one of the best players in the game. Nelson Cruz and J.D. Martinez picked up their first career Silver Slugger awards for their offensive contributions from 2015.

Paul Goldschmidt’s 33 homers and .321 average led all of first basemen in the National League, and he became the first 1st baseman since Vladimir Guerrero back in 2002 with an OPS of over 1.000 and 20+ stolen bases in a season. It was once again Miguel Cabrera receiving the honor for the American League, as although he had a somewhat down year by his standards — playing in only 119 games — he did more than enough to take home the hardware.

Dee Gordon has really broken out over the past few seasons, but he really put it all together in 2015. When all was said and done, Gordon hit a cool .333 on the season after getting off to an unbelievably hot start in April. Gordon is the first NL second baseman since Jackie Robinson to win the league batting title, which truly shows how great of a year he had. Like Gordon, Jose Altuve has become a star in recent years. His 204 hits and 58 stolen bases in 2015 led all of the AL, and Altuve is just the 2nd AL second baseman with multiple 200+ hit, 30+ stolen base seasons, joining Rod Carew.

Both Noland Arenado and Josh Donaldson picked up their very first career Silver Slugger awards on Thursday night, but it’s likely to be the first of many for both. With 42 homers — tied for most in the NL with Bryce Harper — and 130 RBI’s (most in MLB), Arenado finally cemented himself as a full on superstar player in 2015. Donaldson did much of the same, hitting 41 homers and driving in 123 of his own on the verge of what is likely to be an MVP season for him.

As with third base, this category also saw both recipients winning for the first time in their career. But also as with the previous category, it’s likely that these won’t be the only Silver Sluggers for them in their careers. Brandon Crawford exploded this season, increasing his homer total from 10 in 2014 up to 21 this year, and setting career highs in hits, doubles, homers, RBI’s and runs. While Xander Bogaerts didn’t have quite the same caliber year, he still had a good one, with a .320 average and 7 homers, becoming the first Red Sox winner of this award since Nomar Garciaparra in 1997.

Buster Posey has been seen as one of the best hitting catchers in all of baseball for quite some time, and he proved why yet again in 2015. His .318 average and 19 homers led all MLB catchers, as he did in the majority of conceivable categories. In the AL, it was Brian McCann picking up his first American League Silver Slugger with his 26 homers, after winning five others in the past with the National League Braves.

It’s common knowledge that most pitchers simply can’t hit. However, for the few that can, it is a true thing of beauty. Madison Bumgarner falls in that category, leading all pitchers with hits (17), RBI’s (9) and homers (5) this past season. His .247 average isn’t great upon first glance, but when you consider the fact that he’s a pitcher, it takes on a different context. Hitting a homer off of Clayton Kershaw in 2015, and even being called on to pinch hit a few times, there’s no other option for this award than Bumgarner.

Something doesn’t add up with the winner of this category. Don’t get me wrong — Kendrys Morales had a great year, hitting 22 homers and leading the Royals in most statistical categories. But there were several other better candidates, in my opinion. David Ortiz once again had his name in the hat after a 37 homer season, as did Edwin Encarnacion with his 39 dingers (the person many people felt should’ve won). However, despite that, the award was given to Morales. It is what it is, but I can’t seem to wrap my head around this one.

The 2013 Silver Slugger award winners were announced last night on MLB Network. The Silver Slugger awards are given annually to the best offensive player at each position in both the American League and the National League, as determined by the coaches and managers of Major League Baseball.

The voters consider several offensive categories in selecting the winners, including batting average, slugging percentage and on-base percentage, in addition to coaches’ and managers’ general impressions of a player’s overall offensive value. (Managers can not vote for their own players.)

This marks the 33rd annual Silver Slugger Awards which began in 1980.

Here are a list of the winners with my thoughts on each:

The National League saw Michael Cuddyer, Jay Bruce and Andrew McCutchen receiving Silver Slugger awards. All three are deserving, as they had great offensive years. This is just Michael Cuddyer’s first Silver Slugger, despite being in the Majors for thirteen season. Adam Jones also receives his first career Silver Slugger, after batting .285 with 33 homers and 108 RBI’s. In addition, Mike Trout and Torii Hunter pick up the award for the American League after great years.

Paul Goldschmidt and Chris Davis picked up their first career Silver Slugger awards for first base. They both led their respective league in home runs and RBI’s in 2013, so it’s not really a shock that they received the honor. Both have the potential to win more in their careers.

After a great breakout season, Matt Carpenter won his first career Silver Slugger award on Wednesday. Batting .318 with 13 home runs and 78 RBI’s, Carpenter was a major impact player for the Cardinals this season — a big reason why they made it to the World Series. Robinson Cano picks up his fifth career Silver Slugger, with this being his fourth one in a row.

Pedro Alvarez had a career season, leading to his first Silver Slugger award. Though his batting average was a mere .233, Alvarez hit 36 home runs and drove in 100 runs. Alvarez was a big part of the 2013 Pirates team and should remain so for years to come. Miguel Cabrera received the award for the American League, and it’s no surprise at all. Cabrera hit .348 with 44 homers and 137 RBI’s, nearly winning the Triple Crown for a second straight season. Truly remarkable.

Ian Desmond won his second consecutive Silver Slugger award last night, as he had another great year. On the AL side, this is J.J. Hardy’s first career Silver Slugger — Derek Jeter won last year but was injured most of 2013 — and he was very deserving. Hardy didn’t have a very high batting average at just .266, however, his 25 home runs and 76 RBI’s put him over the top for the award.

Surprisingly, this is Yadier Molina’s first career Silver Slugger award, despite multiple good seasons in the past. Molina batted .318 with 12 homers and 80 RBI’s and is a true leader for the Cardinals. As with Molina, Joe Mauer is also a leader for his respective Twins, however, this makes his fifth Silver Slugger of his career; just his first since 2010.

You don’t often think of a pitcher with offensive skills, but Zack Greinke showed off his, and was the best hitting pitcher this past season. Batting .328 over the course of 58 at-bats, Greinke truly deserves this award and has the ability to win another one in the future.

David Ortiz is the record holder for most career Silver Sluggers as a DH, and he picked up yet another one for this season. Ortiz hit 30 home runs with 103 RBI’s to go along with a .309 batting average. Ortiz was a big reason the Red Sox made it to the World Series, and ultimately led them to winning the Championship.