For the first time since 1918, the Boston Red Sox have won the World Series Championship in front of their hometown fans, beating the St. Louis Cardinals 6-1 in game six; four games to two overall. The Red Sox become just the second team in MLB history to win the World Series one season after finishing in last place, joining the 1991 Twins.

Truly incredible when you think about it.

While this was a relatively exciting series, the Cardinals just didn’t have what it took to beat the Red Sox, who were extremely hot at the right time of the year. No player on the Sox was hotter than David Ortiz, who hit .688 with two home runs and six RBI’s in the series, earning him MVP honors. He also holds the distinction of being the second player in Red Sox history to have won three rings with the team — a true Red Sox legend.

Game six was a pitching rematch of game two, with Michael Wacha and John Lackey on the mound for their respective teams. Wacha would have a very uncharacteristic game, allowing six runs through his 3.2 innings pitched. That’s more runs than he had allowed in his previous four postseason starts combined.

The runs came in the third inning, after a good first two innings, on a three-run double by Shane Victorino, and a solo-shot homer by Stephen Drew, along with a few timely hits for a couple more runs, in the fourth. The Sox wouldn’t score again, but the six runs are all

John Lackey was dominant, going 6.2 innings only giving up a single run. He would exit the game in the sixth, with the bases loaded after a couple of hits and a walk, however, his replacement, Junichi Tazawa, would get Allen Craig to ground out to end the threat. That was the nail in the coffin, as the Cardinals wouldn’t come close to scoring a run again.

Koji Uehara, who’s been fantastic for the Red Sox throughout the regular season and postseason, with a World Series ERA below one, got the final three outs of the game to secure the Red Sox their eighth World Series title in franchise history.

This is just their third Championship in 95 years — going 86 years without a title — so it’s not like they’re beating out everyone else season after season. When they win they truly have a magical year.

Ask any Red Sox fan or player and they’ll tell you this season was just that — magical.

As I wrote in my last blog post, there was a chance coming into St. Louis that either the Cardinals or the Red Sox could win the World Series, should they be able to sweep the other team. But thanks to a couple of wild finished, the series heads back to Boston — the Red Sox lead 3-2 — where a champion will be crowned at Fenway Park for the first time since 1975, when the Reds beat out the Red Sox in seven games. (If the Sox win it will be their first World Series clinch at home since 1918.)

But a lot took place to get to this point.

Going into game three, on Saturday, the Red Sox had Jake Peavy on the mound taking on the Cardinals’ Joe Kelly. Both Peavy and Kelly had been decent this season/postseason, and both were looking to give their team the edge in this talent-laden World Series.

Peavy had a bit of trouble early, allowing a couple runs to the Cardinals in the bottom of the first inning, but he quickly regained himself, not allowing a run the remainder of his four inning outing. Kelly was just a bit better, however, as he gave up only one run over 5.1 innings, when he was replaced by Randy Choate, who promptly gave up the game tying run to the Red Sox.

The bottom of the seventh saw the Cardinals retaking the lead, on a two-run double by Matt Holliday. But just as to be expected in an exciting World Series game, the Red Sox tied things up in the very next inning. Making the score 4-4, heading into the ninth.

Things would then get interesting.

The Sox failed to score in the top half, as Trevor Rosenthal was dominant once again, giving the Cardinals a chance to walk-off with a big win. Which they did, but not in the most conventional way. A Yadier Molina single was followed up with an Allen Craig pinch-hit double, placing runners at second and third with just one away. Jon Jay would then ground to Dustin Pedroia, who quickly threw home for the out, but a wide throw by Jarrod Saltalamacchia led to the most talked about World Series play in years.

Will Middlebrooks found himself with nowhere to go after diving for the errant throw, leaving third base umpire, Jim Joyce, to signal obstruction, after Allen Craig tripped over Middlebrooks, which would subsequently win the Cardinals the ballgame. Not a way you’d like to see a game of that magnitude end, but you had to figure it would give the Red Sox added motivation in the next game.

Game four didn’t have a controversial finish, but it did end in just as unusual of fashion.

A surprise to many, Clay Buchholz, who had been reported at thirty percent healthy, had a great game for the Red Sox, only allowing a 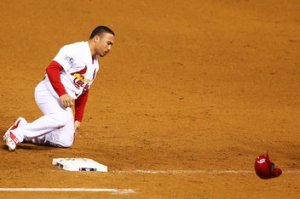 Although, after Lynn allowed a couple of base runners in the fifth, he was replaced by Seth Maness — a mistake in my mind, as Maness has been getting hit all postseason — who allowed a homer to Jonny Gomes, making the score 4-1, Red Sox.

The Cardinals would score a run in the seventh, and go onto make a push to tie the game in the ninth, but a mistake by rookie Kolten Wong ended the game with everyone stunned. Getting picked off at first by Koji Uehara, Wong became the first player in postseason history to get picked off to end the ballgame.

The series once again became tied, heading into a final game in St. Louis.

The one run off of Wainwright came from an RBI-double by David Ortiz, who is now hitting .733 in the series — the only Red Sox player in history with back-to-back 3-hit nights in the Fall Classic. Lester’s lone run came off a solo-shot homer to Matt Holliday — one of Lester’s only four hits allowed.

The Red Sox would get the better of Wainwright in the seventh, scoring two runs to make the score 3-2, Sox. And that’s how the game would end, as Koji Uehara was stellar once again, closing out the game for the Red Sox.

The Cardinals and Red Sox now head back to Boston. It will be interesting to see how each team plays, knowing game six could be it. The way this World Series has been going, however, — especially with Michael Wacha pitching game six for the Cardinals — I wouldn’t be at all surprised to see it go seven games. But, in the end, if I had to pick a favorite at this point in the series, I’d have to give the Red Sox the edge.

We’ll just have to wait and see what happens.

Coming into the 2013 World Series the one thing everyone could agree upon, whether you’re rooting for the Cardinals or the Red Sox, was that this was going to be a great Fall Classic. Many people all around the baseball world expected a back and forth series, with several predicting a series of six or seven games. It would seem, if things keep up, that people’s predictions are going to come true.

But game one didn’t turn out to be the pitcher’s dual many envisioned. 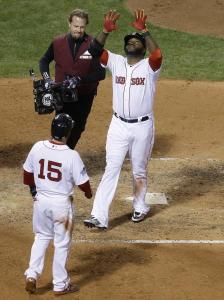 The Cardinals’ Adam Wainwright went up against the Red Sox’ Jon Lester, in what was supposed to be a close game. But the Red Sox came out swinging. After loading the bases in the bottom of the first, Mike Napoli, who’s been heating up lately, cleared the bases on a double, making it a quick three-run Red Sox lead.

The Sox scored again in the second, off of timely hits. After that, however, neither team would score until the seventh, when David Ortiz — who had been robbed of a grand slam by Carlos Beltran, who was injured on the play, earlier in the game — blasted a home run into the bullpen, tacking on another two runs to extend the lead to seven runs, which would become an eight-run lead in the next inning.

Matt Holliday blasted a homer in the top of the ninth, but it didn’t do any good, as the Red Sox had too big of a lead and were able to take game one, 8-1.

The blowout left many people, myself included, scratching their heads and questioning whether this was going to be the series it had been hyped up to be. But doubts were eliminated in game two, as it brought the type of excitement everyone had been waiting for.

Michael Wacha was dominant yet again for the Cardinals, holding the Red Sox hitless through three innings. Jon Lackey was great as well for the Red Sox, but the Cards would strike first in this game, in the fourth, off of a Matt Holliday triple and a Yadier Molina RBI tapper over

the pitcher’s head. However, the Red Sox would answer back in the sixth, on a two-run home run from (who else?) David Ortiz, which ultimately knocked Wacha out of the game.

But it didn’t take long for the Cardinals to regain the lead, as in the seventh, after a walk to David Freese, a Jon Jay single, a double-steal, and a walk to Daniel Descalso, the bases became loaded for Matt Carpenter.

Carpenter hit a sacrifice fly left field, which tied the scored up at two runs. Moments later, on the same play, a high throw in an attempt to pick off Jay at third, gave the Cardinals a one-run lead. Then Carlos Beltran — who had been questionable to even play in this game due to an injury the night before — drove in Descalso, making it a 4-2 Cardinals lead, which is where the game would end.

The Red Sox and Cardinals now head to St. Louis tied at a game apiece. Either team has a chance to win the World Series Championship at Bush Stadium if they can sweep, however, with the talent both teams possess, odds are the winner will be crowned at Fenway Park sometime next week.

This could easily turn out to be a World Series for the history books.