The wait is finally over for Pirates fans.

Gregory Polanco — the 12th overall ranked prospect in all of baseball, and one of the highest praised young outfielders in years — is set to make his MLB debut later tonight against the Cubs, receiving the call after second baseman, Neil Walker, was placed on the disabled list.

Set to play right field for the Buccos, Polanco is joining an already talented outfield of Starling Marte (left) and Andrew McCutchen (center), taking over for Josh Harrison, who has done a fantastic job this year in right field, hitting near .300 and making numerous spectacular catches. Nonetheless, replacing Harrison with Polanco instantly makes the Pirates outfield one of the best in baseball.

And that’s why, in the minds of many baseball fans, the arrival of Polanco is long overdue. After getting off to such a great start to the year at Triple-A Indianapolis, the idea of a big league call up for Polanco began to gain mention (several rumors were started just in the past week regarding a promotion), but when he continued to stay hot, making it up to seven home runs and 49 RBI’s, to go along with a .347 batting average before his call up, Polanco truly left the Pirates no other choice.

With the Pirates struggling somewhat so far this season, the hope is that the young, talented Polanco will arrive on the scene and help turn things around.

Sitting three games back of .500, and 7.5 games back of first place, it’s still too early to count out the Pirates, especially now that Polanco is going to get some time for the club. Despite lofty predictions being made for this year after the Pirates made the playoffs for the first time in twenty years last season, at this point in 2013 they were eleven games above .500, which is allowing understandable concern to come into play.

But could Gregory Polanco’s mere presence truly be enough to turn around the Pirates?

Well, though it’s going to take the entire team playing better for the Pirates to go on a run, we’ve seen big time players make big time impacts before. Take Yasiel Puig for example. The Dodgers were doing terribly last season before his call up, and after Puig’s arrival, the Dodgers went on a record-breaking streak that ultimately led them to the playoffs. Sure, the entire team began playing well, but the initial spark undeniably came from Puig.

However, while it’s certainly possible that Polanco will kick start the Pirates, it’s not all that likely. The biggest difference between the Dodgers’ team, and the Pirates’ 2013 team for that matter, is pitching — bother the starting rotation and the bullpen.

Last season, the Pirates had a magical year, where nearly every one of their pitchers from top to bottom was superb. But the loss of A.J. Burnett this offseason, the recent injury to Gerrit Cole, and the terrible performance by 2013 ace Francisco Liriano, has hurt the chances of an already poor team.

And thus, it will certainly be interesting to see just what type of impact Polanco has for the Bucs. Asking him to put the whole team on his back and carry them to the playoffs for the second straight year is an awful lot to expect from Polanco, but with young phenom prospects, you never truly know what they can do.

But one thing’s for sure: Gregory Polanco is just as excited as Pirates’ fans to finally be making his way to the Steel City, regardless of the current struggles; saying in a tweet on Monday night, “Pirates fans, thanks for being patient with me . . . The wait is over. My dream has officially come true.”

With a win on Tuesday night, against the Milwaukee Brewers, the Pittsburg Pirates secured a non-losing record for the first time since 1992.

Letting that sink in for a minute — their first .500 or above season in 21 years — this is a big deal. Not only for the Pirates and their fans, but for fans of all teams around the baseball world. Anytime a teams goes on such a bad skid for so long, you find yourself rooting for them to succeed. And that’s just what everyone has been doing as of late.

But now isn’t the time to celebrate, according to many. While the Pirates have accomplished something great, by their recent standards, they still need to keep their focus on winning; which they will assuredly do. Although they will undoubtedly make the playoffs, they still determine their own fate, in terms of whether their playoff appearance will be via a division title, or a Wild Card spot — the title, obviously, being their goal.

Many, however, don’t see the Pirates as having a good enough team to hold off the Cardinals and Reds for first place in the National League Central, but I have to disagree. While the Reds and Cardinals are both excellent teams, the Pirates are a completely different team than they have been in years past. A team that I could see making a deep playoff push.

The Pirates have a decent pitching staff — in veterans A.J. Burnett and Jason Grilli (their closer), as well as rookie Gerritt Cole — and while they haven’t been anywhere near dominant for the majority of the year, they’ve found a way to come through in big games–the same holding true for the rest of the team. Andrew McCutchen has had a great season, and newly acquired players, Justin Morneau and Marlon Byrd, are sure to help out in the final stretch.

With just over three weeks remaining in the regular season, where anything can happen, it’s game on in the National League Central. The Pirates, Cardinals and Reds are likely to exchange places a few times in the standings before all is said and done, but in the end, I feel that the Pirates’ magic they’ve had all season long will continue into the post season.

It’s been a long time coming for Mets’ number 2 prospect, Matt Harvey, and Pirates’ number 3 prospect, Starling Marte, who are set to make their MLB debuts tonight against the Diamondbacks and Astros, respectively. Neither is making their debut in front of the home fans, but rather on the road. I imagine it’d be more of a thrill for them to have the backing of the home crowd in their debuts, but I’m sure they could care less. What matters is that their hard work has finally paid off, and as a result, they’re finally getting a shot in “The Show”.

Starling Marte is due to make his debut against Astros’ starting pitcher Dallas Keuchel. Keuchel is 1-2, with a 4.03 ERA, so I feel he’ll be no match for Marte who’s been hot as of late with AAA Indianapolis. (With Indianapolis, Marte posted a .286 average, with 12 home runs, 62 RBI’s and 21 stolen bases.)

The plan is for Marte to play left field, where he certainly has the skills to. Marte is an above average defensive outfielder, and with his speed, has the ability cover a lot of ground to track down balls that your average outfielder might not be able to get to.

Marte’s hot bat, and excellent defensive skills, are sure to make for an exciting debut.

Matt Harvey is also sure to impress in his debut tonight against the Diamondbacks. He’ll be facing a tough lineup, however, as well as starting pitcher, Wade Miley, who’s had great success so far this season. 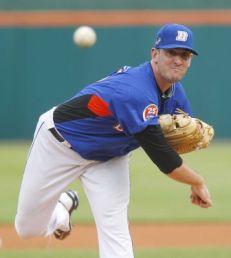 The one thing that really sets Harvey apart, in my mind, from Miley, is his ratio of strike outs per nine innings of work. Harvey posts a 9.2 ratio, compared to a mere 6.8 for Miley.

I’d be the first to state that you can’t always make a fair comparison using just stats, but in this case, it’s fairly obvious that Harvey is the overall more dominant pitcher. Which is why I feel he’ll get the win tonight in his debut.

While I feel both Marte and Harvey are going to have great debuts tonight, I want to hear what you think:

To answer the poll, in terms of who had the better MLB debut between Harvey and Marte, I’m not sure. It’s hard to compare a position player to a pitcher. Both did outstanding, but if I had to pick one of the debuts, I’d have to say Harvey’s was the more impressive of the two; but again, it’s a tough comparison.

Starling Marte started his MLB career off with a bang, as he sent the first pitch he faced in his Major League career over the wall for a home run:

Starling Marte would go 1-3 in the rest of the game. An impressive debut to say the least.

Matt Harvey also had an incredible debut, going 5.1 innings, striking out 11, and allowing just 3 hits. Harvey’s 11 strikeouts sets a record for most strikeouts by a Mets’ Rookie in his MLB debut.

The thing that impressed me even more than his electric stuff, was the fact that Harvey can hit. In his first career at-bat Harvey smacked the ball over the head of the center fielder (who misplayed the ball) for a double. Harvey would single in his next at-bat, to go 2-2 on the night.

Given the fact that Starling Marte homered on the first pitch of his MLB career, and Matt Harvey struck out more batters than any other Mets’ rookie in their MLB debut, I’m sure we can all agree that both Marte and Harvey lived up to the hype.