Aside from the mid-season trade deadline that sees numerous players changing squads with the hopes that they might be the final piece needed to push any given team into the postseason, the Winter Meetings are the busiest time of year for trades and signings to take place around Major League Baseball.

In the past, some of baseball’s biggest deals have taken place during the Winter Meetings (it was the 2007 meetings when the Tigers picked up Miguel Cabrera). But while the 2016 Winter Meetings that took place in National Harbor, Maryland, didn’t have nearly as much action as some of the previous ones, there were still some huge transactions that will vastly affect teams when the 2017 season begins.

Following the signings of big-time free agents Yoenis Cespedes and Carlos Beltran over the past couple of weeks, the Winter Meetings began on Sunday evening, with many rumors swirling around as to what would take place over the course of the five day event. But over time, as always, fact was quickly distinguished from rumor.

Things kicked off with the signing of Matt Holliday by the New York Yankees on a one-year, 13 million dollar deal. While the acquisition doesn’t immediately jump off the page as all that great, it’s still an impactful one. The seven-time All-Star can play a variety of positions, and can still hit with the best of them, knocking 20 homers in 2016. 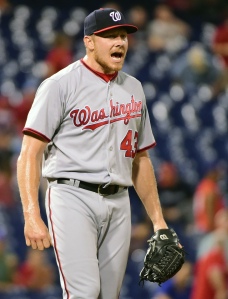 On the opposite side of the spectrum is Mark Melancon, who is one of the best at limiting homers, giving up just three total over the course of 71.1 innings last season. For his efforts, Melancon was grabbed by the Giants for the next four years at a price tag of 62 million. After saving 88 games over the last two years, Melancon certainly earned it, and San Francisco appears to have found their closer.

It also appears that Melancon will come in handy for the Giants, as their long-time rivals, the Dodgers, were successful in resigning Rich Hill on a three-year, 48 million dollar deal. After being virtually on his way out of the sport at one point, Hill posted a 2.12 ERA last season, and would likely be the Dodgers’ ace if not for Clayton Kershaw. Still, he sits as one of the best pitchers in the game.

Offensively, it became apparent that the Blue Jays were looking into other options other than Edwin Encarnacion following their signing of Kendrys Morales a few weeks ago, but it became even more so with the addition of Steve Pearce for 12.5 over the next two years. Pearce doesn’t have nearly the power of some players, but his bat is still one that can impact any given game, despite not being a huge move.

However, just as it seemed that the Winter Meeting were going to be a bit slow, with just a few above average deals, the Red Sox decided to take things up a notch. Following a trade for reliever Tyler Thornburg from the Brewers in exchange for Travis Shaw, Mauricio Dubon and Josh Pennington, Boston made the biggest splash of the offseason to this point.

Yoan Moncada and Michael Kopech, along with Luis Alexander Basabe and Victor Diaz, in return for Chris Sale. If Sale can keep up his dominance that’s made him one of the best pitchers in baseball, the Red Sox could win the division with ease in 2017. But as has been seen in the past, baseball is extremely unpredictable.

Nearly as uncertain is a player’s health from any given season to the next, and Wilson Ramos is a prime example of that. After beginning 2016 on a tear, Ramos suffered a season-ending injury this past season, but hopes to be ready to go sometime around the middle of 2017. Whenever he arrives with the Rays, who signed him to a two-year, 12.5 million (18.5 with incentives) dollar deal, he’s sure to make his presence known.

Wade Davis is also sure to make a big difference for the Cubs, as if they needed any more help. After winning the World Series for the first time in 108 years this season, Chicago picked up lockdown reliever Wade Davis from the Royals in a trade that sent Jorge Soler to the Royals. With Aroldis Chapman winding up with a team away from Chicago as the Winter Meetings progressed, Davis could come up big in 2017.

But while teams such as the Red Sox and Cubs were focused on rebuilding their major league lineup, there were those like the White Sox who made huge improvements to their farm system. After receiving quite the hall from the Red Sox in the Chris Sale deal, the Sox proceeded to pick up Lucas Giolito, Reynaldo Lopez and Dane Dunning from the Nationals, losing just Adam Eaton in the swap.

Many see this as a vastly one-sided deal, with the Nationals getting the short end of the stick. But after losing out on Chris Sale and Mark Melancon, the Nationals were undoubtedly looking to add an impact piece and were all in to get Adam Eaton. They may regret it in the short term, but in the long term things may work out in their favor.

One player who didn’t have things work out quite the way he had been hoping was Ian Desmond, who agreed to a five-year, 70 million dollar contract to play in Denver. After struggling mightily in 2015, following a turndown of a 7-year, 102 million dollar offer from the Nationals in 2014, Demsond really broke out again in 2016 with the Rangers.

The Rockies could use some offense (among other things), and Desmond adds a big piece to their improving lineup, despite not getting the contract he could have received just a few seasons ago.

The final big transaction made on the final day of the Winter Meetings saw Aroldis Chapman going back to the Yankees for five years and 86 million dollars. Coming off his help with the Cubs in their World Series title quest in this season, Chapman has long been known as a devastating pitcher, with his 102+ mile per hour fastball. It will be interesting to see how the Yankees fare in 2017 in what has become a competitive division, but with Chapman locking down the ninth, anything is truly possible.

But while some teams such as the Yankees, Red Sox and White Sox left the Winter Meetings with their teams very different from when things began, with others doing hardly anything at all to improve their club, it’s important to keep in mind that there are still over 16 weeks left until the 2017 season begins.

The shaking up of teams this offseason could possibly be far from over.