When Billy Hamilton stole over 100 bases in 2011, he caught the attention of numerous people. When Hamilton broke the all-time minor league single-season stolen base record in 2012 by swiping 155 bags, he earned the respect of baseball fans across the country. And now that Hamilton has reached the major league level, with sky high expectations, he has the entire baseball world watching his every at-bat. 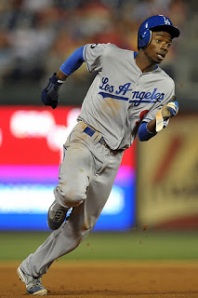 However, while Hamilton has the potential to be a star, he hasn’t been able to get things going so far this season, batting .231 with 9 stolen bases. Nonetheless, there are still a ton of people who feel Hamilton will eventually become one of the all-time best base stealers, even with the slow start.

But there’s a player very similar to Hamilton who isn’t getting the same recognition.

Dee Gordon is on the verge of a breakout season, with him batting in the mid 300’s, including 12 stolen bases, and the speed he possesses rivals that of Billy Hamilton. From turning a ground ball into a double, to legging out a triple on what would be a double for most other players, Gordon seems to do something exciting each and every night that makes you shake your head in disbelief.

Despite never stealing more than 73 bases in the minors, Gordon can certainly run with the best of them, even if he never broke any big time records like Hamilton, and thus doesn’t get the major headlines.

The one thing that Gordon has shown the capability of doing better than Hamilton on the major league level is getting on base consistently, whether it be via a hit or a walk. In the end, it doesn’t matter how much speed you have, if you can’t put the ball in play it does you no good. (As they say, you can’t steal first.) But that isn’t a problem for Gordon, as he has shown that he can hit for a high average in addition to displaying a little pop every now and then.

So, while you should definitely watch Billy Hamilton to see if he can go on a hot streak and begin to rack up incredible numbers, be sure to keep an eye on Dee Gordon as well. While he likely will cool down a bit as the season goes on, if his first few games are any indication, this could be a very special year for the Dodgers’ leadoff hitter.