Unless you’re an early riser, you probably missed the start of the 2014 baseball season.

For the first time in the history of Major League Baseball, a baseball game (airing live at 4 a.m. on MLB Network), between the Los Angeles Dodgers and the Arizona Diamondbacks, was played in the Southern Hemisphere, at the Sydney Cricket Ground in Australia.

(This marks the earliest (March 22nd) a regular season has ever begun, taking place over a week before Opening Day.)

But this isn’t the first time major league teams have squared off in another country to begin a season. Fifteen years ago, the Colorado Rockies and San Diego Padres launched the start of the 1999 season in Mexico. Since then, the regular season has started in both Japan (2000, 2004, 2008, 2012) as well as Puerto Rico (2001) over the years, with this being the first ever matchup in Australia. While these games aren’t played in the United States, they still matter, as they count towards the overall standings.

Game one of the two-game series in Australia saw Clayton Kershaw on the mound for the Dodgers, taking on Wade Miley, who was pitching for the Diamondbacks. Originally, Patrick Corbin was set to make the start for the D-backs, but an injury — one that could keep him out a good portion of this season — kept him from making the start.

As usual, Kershaw was great, going 6.2 innings, allowing a single run on 5 hits and striking out seven. While Miley struck out more than Kershaw, tallying a total of 8, he also gave up more runs, allowing 3 in his outing; including a two-run homer to Scott Van Slyke.

When all was said and done, that was the final score — the Dodgers winning 3-1.

Game two is set to air live, once again, on MLB Network, at 10 p.m. tonight, with Hyun-Jin Ryu taking on Trevor Cahill. With that matchup, and the talent the Dodgers have, it seems very likely that the Dodgers will return to the United States having won both games of the series, but you never know what could happen and what the rest of the season will hold.

The Dodgers will play another game on March 30th against the Padres, as part of Opening Night on ESPN. Opening Day officially kicks off the regular season for the majority of teams on March 31st.

Due to the Dodgers’ and Diamondbacks’ opening-series that’s set to take place on March 22nd and 23rd in Australia, Spring Training action is beginning a bit earlier than usual this year. The Diamondbacks have their pitchers and catchers reporting today, with the 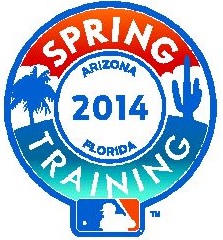 Dodgers’ pitchers and catchers reporting on Saturday. Therefore, for the first time since the Red Sox won the 2013 World Series over three months ago, baseball is finally back.

But while the Dodgers and Diamondbacks are getting started this week, the remainder of the teams won’t begin reporting until next week, anywhere from the 11th to the 17th: The Indians report date is set for Tuesday; the Cardinals and Mariners will begin on Wednesday; the Braves, Orioles, Phillies, Pirates, Nationals, Angels and Padres report Thursday; the Tigers, Yankees, Rays, Cubs, Reds, Royals and Athletics arrive on Friday; the Red Sox, Astros, Mets, White Sox, Rockies, Brewers and Giants on Saturday; the Marlins, Twins and Rangers report on Sunday; and the Blue Jays begin on Monday. (The rest of the players for all the teams will report anywhere from 3 to 7 days after their respective pitchers and catchers.)

Once all of the pitchers and catchers have reported to Spring Training on February 17th, there will be a mere 33 days until the 2014 Major League Baseball season gets underway in Australia. I, for one, can’t wait.

But I’m not quite ready to jump ahead to the start of the regular season just yet, as I still have a lot I want to talk about in the coming weeks. Therefore, for the time being, I’d like to take a minute to discuss something I love to do this time of year (besides watch Spring Training games on TV.) Every Spring Training, for the past two or three years, I’ve sent out a handful of through the mail (TTM) autograph requests to different players around the league. This year, I’m going to be sending out a dozen, or so, TTM’s, with the best player being Clayton Kershaw. 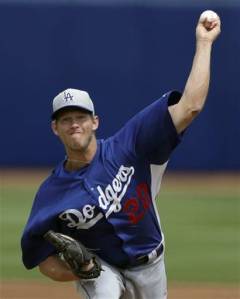 While that might seem like a long shot — and it very well may be — Kershaw, surprisingly, has been known to sign through the mail over the past few years; the only downside being that it takes over a year for him to return it to you.

Though his recent record breaking contract, and second Cy Young award, may lead to him getting even more fan mail, causing a subsequent stop of him signing for fans that write to him, Kershaw is good enough for me to take a chance on. Even if I don’t get anything back, at least I tried.

Other MLB players I’m sending to include Taijuan Walker (who made his MLB debut in 2013), David Robertson, Kolten Wong, Cody Asche, Mike Napoli and Jake Marisnick. All of these players have been known to be decent TTM signers, with Walker and Robertson being nearly automatic over the past couple years. Asche told me that he tries to sign everything that gets sent his way, so I’m fairly confident I’ll get that one back at least.

I’m also sending to several Minor League players who were invited to Major League Spring Training this year — some for the first time ever. Those players include Archie Bradley, Kyle Zimmer, Mark Appel, Kris Bryant and Albert Almora. All five of these players will be in the majors at some point over the next few years, with Bradley likely making his big league debut this season. Bradley, Zimmer and Appel have all told me that they sign TTM, so I feel like I’ll get those back. Almora has been hit and miss recently, and I doubt Bryant will, but I’m sending to both of them anyway, because you never know.

Last year I sent off eleven autograph requests to Spring Training and received back six of them, from Jason Motte, Danny Hultzen, Stephen Romero, Sonny Gray, Tyler Skaggs and Casey Kelly. That’s pretty good as far as TTM’s go. If I get back five or six of the dozen I’m sending off this year — which is what I expect to receive — I’ll be happy.

I’m planning to post a blog entry every time I receive back a couple autographs from the players I’m sending TTM requests to during Spring Training, just as I did last year. Hopefully it won’t be all that terribly long before I start getting them back (maybe a few weeks?). So be sure to check back for that over the course of the next couple months.