I wasn’t originally planning to attend this game, as I had already gotten most of the Bulls players autographs that I wanted, and the opposing team, the Charlotte Knights, didn’t really have any players that were worth a trip out to the ballpark. But when it was announced back in June that the Bulls were going to retire Chipper Jones’ uniform number in August, and that Chipper himself was going to be there, of course I had to go.

As with any game I go to, I showed up (along with my dad) to the ballpark around thirty minutes before the gates were set to open. With the large crowd expected, due to Jones being there, the gates opened up an extra thirty minutes earlier than usual, which was nice, as when I headed down to my normal spot beside the Bulls dugout, I was able to witness batting practice for the first time at the DBAP:

Taking in batting practice at this particular ballpark is something I’ve always wanted to do — it’s usually over by the time the gates open — ,however, after seeing it, I can honestly say that it wasn’t any grander than any other BP I’ve seen at major league parks. (I guess that makes sense; I don’t know what I was expecting, really.)

But getting back to Chipper Jones; I stuck around by the dugout for nearly an hour, at which point the ushers cleared out the aisles. I made my way to an empty nearby seat, and shortly thereafter, Chipper entered the ballpark, in a Porsche (as to be expected), to make a “parade lap” around the warning track:

It was great to see Chipper again, for what will likely be the last time. The crowd was electric upon his entrance, and it truly was an amazing moment to be apart of.

After making his way around the park, and back to the infield, Jones headed up onto the stage that had been set up for the ceremony, where he was given a piece of the old ‘Hit Bull, Win Steak’ sign…: 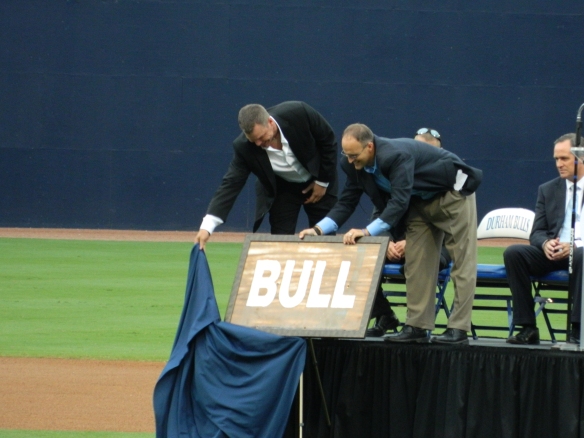 ….shown a brief highlight video of his career….:

….and presented his number 10 retirement plaque….: 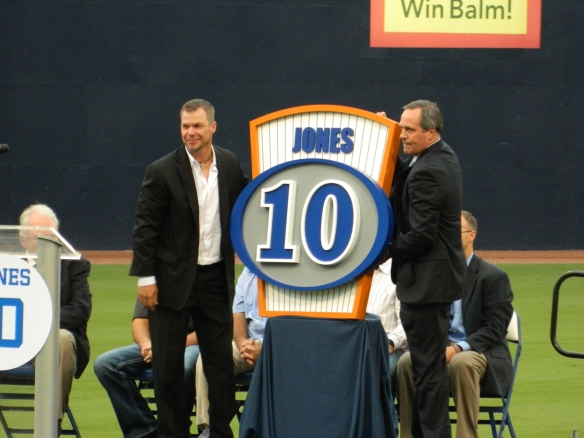 ….before taking to the podium, for his speech:

Jones didn’t speak terribly long, but he didn’t have to. People know what he did here, and what he went on to do. A no doubt Hall of Famer, Chipper Jones is one of those few players that comes along and just does everything right, both on and off the field. Calling Durham “the greatest place to play Minor League Baseball in the country”, the fans still, and always will, admire Jones as one of the best to ever come through Durham, on the way to a successful Major League career.

After throwing out the first pitch of the game, Chipper quickly exited the ballpark. Although I didn’t get an autograph like I was hoping, it was still one of the greatest times I’ve ever had out at a Minor League Baseball game. It was an incredible night.

But the night didn’t end when Chipper Jones left. There was still a game to be played.

Bulls’ starting pitcher, Mike Montgomery, started off the night great, as he didn’t allow a hit until the fourth inning. After the one hit, however, the wheels fell off. Giving up three runs in the fourth, the Bulls quickly found themselves down 3-1. But they didn’t waste any time answering back, posting three runs of their own in the bottom half of the same inning.

Both teams would score a run in the fifth, putting the score at 5-4, Bulls. And that’s how things would end. (An appropriate ending to the night, in my book.)

I stopped by the Bulls’ retired numbers wall on the way out of the ballpark, where Jones’ number had already been added:

I have no doubt I’ll stop to glance at the wall every time I head out to the ballpark from now on; recalling the night of August 20, 2013 — one of the most special nights I’ve ever experienced at the DBAP.

Twenty-one years since playing for the Bulls, Chipper Jones is returning to Durham.

Jones is set to join Crash Davis, Joe Morgan and Bill Evers as the only players to ever have their number retired by the Bulls, in a

retirement ceremony on Tuesday. Morgan currently holds the distinction of being the only Bull to go on to be inducted into the National Baseball Hall of Fame, but that’s likely to change, once Chipper becomes eligible a few years down the road.

Jones played with the Bulls for a total of 70 games during the 1992 season, in which he batted .277 with four home runs and 31 RBIs. This coming back when the Bulls were the Class-A affiliate of the Braves, Jones would go on to become an eight-time All-Star, playing for the Braves his entire career.

The uniform number retirement ceremony for Chipper Jones is set to take place at around 7:00, before tomorrow night’s Bulls game. And I’m planning to be there.

Gates are set to open at 5:30, and I’m hoping to be one of the first inside. This will more than likely be my last time seeing Chipper, and I’m optimistic that I’ll be able to get his autograph. (I’m going to try to get it on a 2012 All-Star baseball, that I won last year in a Twitter contest.) But no matter what happens, it’s sure to be an exciting night, and I’ll be sure to blog about it all on Wednesday.

But as if that’s not enough baseball excitement for one week, I’m also planning to attend Saturday’s Bulls game, versus the Norfolk Tides (AAA affiliate of the Orioles).

The Tides are loaded with great players and prospects, with the most notable being Orioles number one and number five prospects, Kevin Gausman and Jonathan Schoop, who have both been having great seasons. I’m hoping to pick up an autograph from both. (Eric Thames, Zach Britton, Danny Valencia and Freddy Garcia being the other players I’m after for an auto.)

I haven’t yet decided whether or not I’ll be blogging about Saturday’s game, but you never know. It really depends on if anything out of the ordinary occurs, and how much else is going on around the rest of the baseball world. So, stay tuned….