A couple of weeks ago, I blogged about the through the mail (TTM) autograph requests I had received back from Spring Training, having received back an auto from Mark Appel and Sam Tuivailala. At the end of the post, I stated that I was going to be publishing a blog post once I had received back a few more autographs, and now that I’ve successfully gotten back some more of the requests I sent, I figured I’d go ahead and type this entry up: 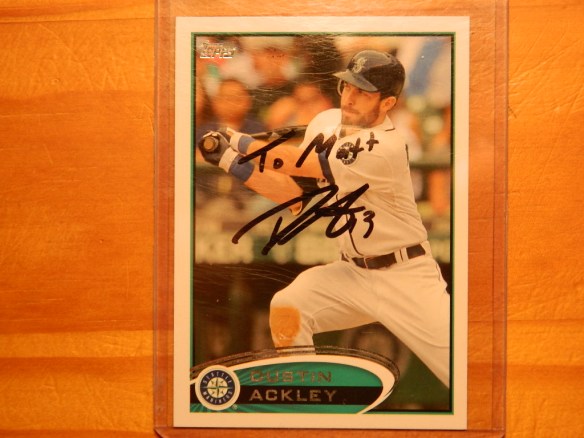 Dustin Ackley has been up and down over the course of his big league career, but he really broke out last season. Hitting a career high 14 home runs and 65 RBI’s, Ackley had a great season for the Mariners in 2014, and is looking to continue that into this year. If he can perform the way he is capable of, combined with the rest of the Mariners living up to their potential, Seattle could have a very formidable team this coming season.

It’s truly a mystery how Joe Kelly will pitch this season for the Red Sox. Coming over from the Cardinals in 2014, Kelly had a fall back season of a 4.20 ERA over 17 starts after a good 2013 of a 2.69 ERA over 15 games started. But despite the downfall in stats, I look for Kelly to have a good 2015. Though he won’t likely win Cy Young award — as he jokingly predicted awhile back — Kelly will still have a noteworthy year.

This one is rather self explanatory. Receiving induction into the Hall of Fame in 2014, Tony La Russa is truly one of the best managers of all time — and a personal favorite of mine. A three time World Series championship manager, racking up 2,728 wins over his 33 years, La Russa was absolutely amazing at what he did. Though he didn’t put together all that great of stats as a player, batting just .199 for his career, his managerial stats will likely stand the test of time.

I still have autograph requests out for Rob Kaminsky, Jacob Gatewood, Scooter Gennett and Doug Fister. When/if I get any of those back, assuming it’s before Opening Day on April 6th, I’ll be sure to post another update. Though, there’s no guarantee I’ll get any more back at all.