With the 2014 Major League Baseball rosters for the All-Star game set to be announced on Sunday night, it leaves just enough time for fans such as myself to give their takes on who is deserving of the mid-summer classic. While the voting has officially ended, and although I’ve already given my take on who I feel would be the most worthy candidates in a post I did back in April, I wanted to take the time to discuss the rookies who are posting the stats of an All-Star caliber player.

The two rookies who are near locks for the game are Jose Abreu and Masahiro Tanaka.

Jose Abreu came to the White Sox this past offseason as the prized international slugger from Cuba. Though he displayed some of his amazing power back in the 2013 World Baseball Classic, and although there were numerous stories of his incredible hitting performances, no one truly knew what the Sox were getting when they signed Abreu to a 6-year, 68 million dollar contract. But he’s done nothing but deliver on the gamble.

Currently riding an 18-game hitting streak, and with his .280 batting average on the year to go along with his 27 home runs and 69 RBI’s (all despite an injury which would’ve led to even larger stats), Abreu is a favorite to make the All-Star roster for the American League. 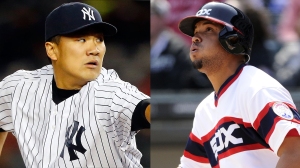 As with Abreu, Masahiro Tanaka was an extremely hyped international player who was a major sign this past offseason. Finding a home with the Yankees, on a 7-year, 155 million dollar deal, Tanaka has kept an otherwise dismal Yankees team in the race for the American League eastern title.

Without him and his overpowering splitter, there’s no telling where the Bronx Bombers would be at. Over the course of 17 starts, Tanaka has posted a 12-3 record to go along with a 2.27 ERA, and that should be enough for the All-Star game, with the possibility of Tanaka receiving a number of different awards come the end of the season.

But while Abreu and Tanaka are likely to find themselves up in Minnesota in just over a week, there are a few other rookies who have a decent case to join them but may fall just short of making the cut.

Dellin Betances is probably the biggest example of that, as he arguably has the stats to join the other great players, but perhaps isn’t quite over the line. Through 37 games of relief for the Yankees, Betances, with his 1.61 ERA, has blown away the opposition, striking out a total of 78 batters.

That’s the one thing that

separates Betances from the rest of the talented rookie pitchers, as though a couple of other rookie pitchers have great ERA’s — Jake Petricka with 1.94 and Jeurys Familia with 2.22 — no other reliever has a strikeout ratio close to that of Betances. Even so, while his stats are impressive, they may not be impressive enough for him to pitch up at Target Field next week.

On the offensive side of things, not likely making the cut is newcomer George Springer, who has been one of the main reasons behind what has turned out to be a better-than-expected season for the Astros so far this year. Though not making the team out of Spring Training (an extremely talked about story line), Springer’s 17 homers and 46 RBI’s are note worthy, nonetheless.

The biggest problem with Springer’s All-Star case is a mere .242 batting average. That’s the one thing that will keep him from making the All-Star team this year, and the one thing Springer will have to improve upon if he wants to make the cut in 2015.

While the rookies listed above may or may not make the 2014 MLB All-Star team rosters (you can find out on Sunday at 7:00 on ESPN), there’s no doubt that they will all be making huge impacts on their given teams for years to come. And therefore, it would come as little surprise if they each make their fair share of All-Star rosters.